E-cigarettes are healthier for your neighbors than traditional cigarettes, but still release toxins into the air, according to a new study from USC.

Scientists studying secondhand smoke from e-cigarettes discovered an overall 10-fold decrease in exposure to harmful particles, with close-to-zero exposure to organic carcinogens. However, levels of exposure to some harmful metals in secondhand e-cigarette smoke were found to be significantly higher.

Our results demonstrate that overall electronic cigarettes seem to be less harmful than regular cigarettes, but their elevated content of toxic metals such as nickel and chromium do raise concerns.

While tobacco smoke contains high levels of polycyclic aromatic hydrocarbons — cancer-causing organic compounds — the level of exposure to these substances was reduced to almost zero in secondhand e-cigarette smoke, due to the fact that they do not burn organic material the way old-fashioned cigarettes do.

“Our results demonstrate that overall electronic cigarettes seem to be less harmful than regular cigarettes, but their elevated content of toxic metals such as nickel and chromium do raise concerns,” said Constantinos Sioutas, professor at the USC Viterbi School of Engineering and corresponding author of the study, which was published online on Aug. 22 by the Journal of Environmental Science, Processes and Impacts.

Sioutas and his colleagues at Fondazione IRCCS Instituto Nazionale dei Tumori (National Institute of Cancer Research) in Milan, Italy, began this study with the goal of quantifying the level of exposure to harmful organics and metals in secondhand e-cigarette smoke, in hopes of providing insight for the regulatory authorities.

“The metal particles likely come from the cartridge of the e-cigarette devices themselves, which opens up the possibility that better manufacturing standards for the devices could reduce the quantity of metals in the smoke,” said Arian Saffari, a Ph.D. student at USC Viterbi and lead author of the paper. “Studies of this kind are necessary for implementing effective regulatory measures. E-cigarettes are so new, there just isn’t much research available on them yet.”

For this study, the researchers conducted all of the experiments in offices and rooms. While volunteer subjects were smoking regular cigarettes and e-cigarettes, the researchers collected particles in the indoor air and studied the chemical content and sources of the samples.

“Offices and rooms — not laboratories — are the environments where you’re likely to be exposed to secondhand e-cigarette smoke, so we did our testing there to better simulate real-life exposure conditions,” Saffari said.

Sioutas and Saffari compared the smoke from a common traditional cigarette brand with smoke from an Elips Serie C e-cigarette, one of the most popular European brands. The results could vary based on which type of cigarettes and e-cigarettes are tested, the researchers noted.

Sioutas and Saffari collaborated with researchers from LARS Laboratorio and the Fondazione IRCCS Instituto, as well as the University of Wisconsin-Madison and Cornell University.

Financial support for the study was provided by the Fondazione IRCCS Instituto. 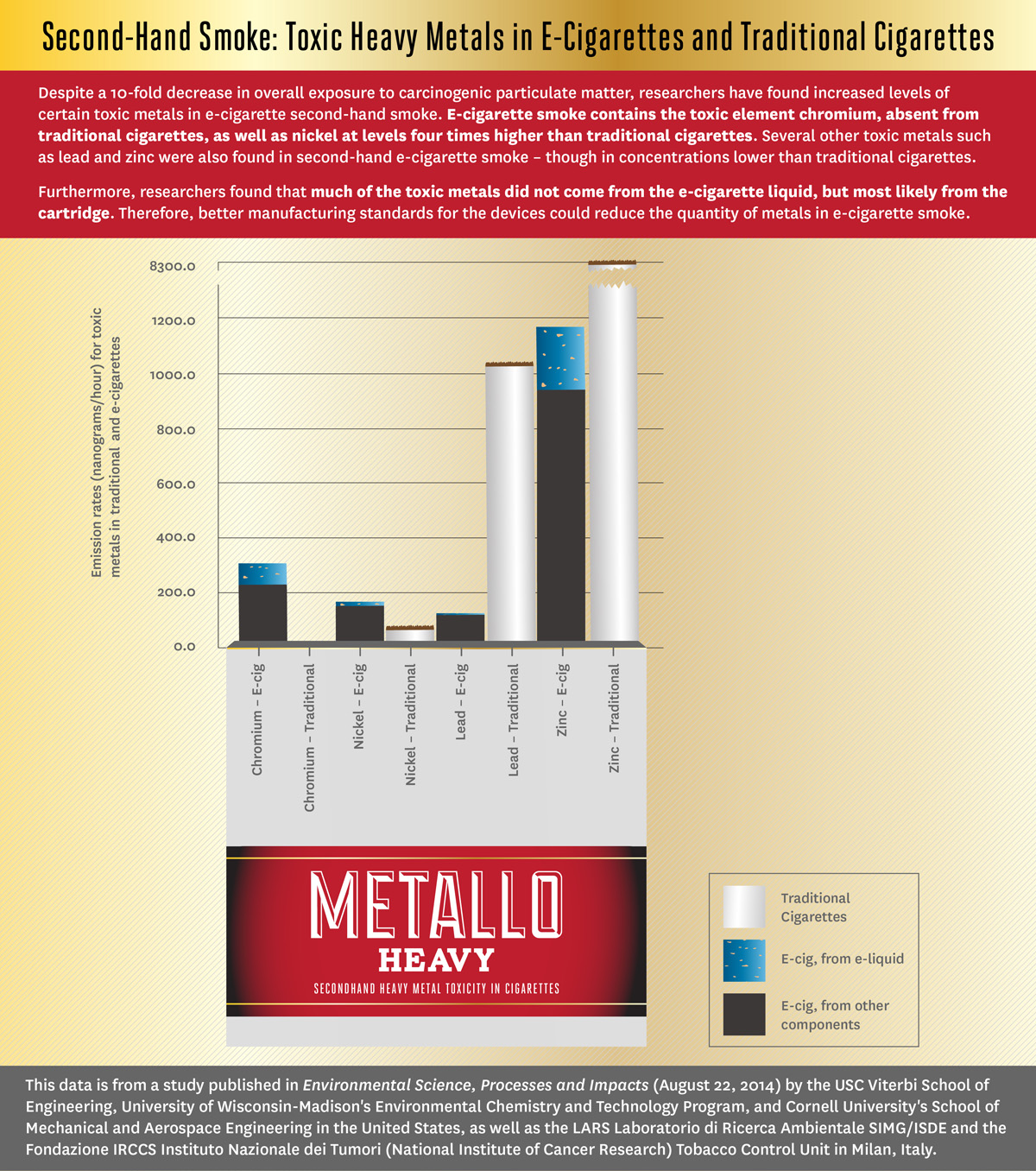 Even after they stop smoking, patients with chronic obstructive pulmonary disease continue to experience lung damage.