That was Xinran Ji’s way of solving problems, according to Jiaming Kong, a close friend from his undergraduate days at Zhejiang University in China.

Ji, a graduate student in electrical engineering, who tragically lost his life last Thursday, is remembered by friends as “amiable, willing to help all the time” and possessing an almost encyclopedic knowledge of bikes, cars, trains and planes. He could name each model of Chinese railway engine from the oldest to the latest bullet trains. He was someone “always smiling, modest, positive and hard working.”

He showed an “unremitting effort in putting pieces together and making them dance.”

But it was that last part that particularly stood out to Kong, who saw in his friend “a young star who had a passion about his work,” an engineer who showed “unremitting effort in putting pieces together and making them dance.”

Said Kong, “As an engineer at work, I know how often people will cut corners, hack things, and leave a potential for instability risk in the future. Yet I found none of these in his portfolio.”

Honored as an undergrad

Even before entering the USC Viterbi School of Engineering this past fall, Ji had distinguished himself. His undergraduate research in the design and implementation of control systems for quad-rotor aircraft earned him a First-class Scholarship for Excellence in Research and Innovation from Zhejiang University in December 2012. 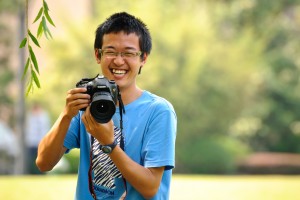 Before that, in 2006, he’d been No. 1 in the High School Admission Competition in his hometown of Hohhot, an extremely competitive exam, similar to the U.S. SATs.

His love of building things told the tale of an evolving, gifted engineer. First, there was a simple and elegant feed forward controller model; a car that navigates itself by seeing in infrared; a clock that tells international time in a more human way; and finally, a drone that can park itself, fly sideways and stabilize its aerial position automatically.

According to Danlei Chen, another close friend and fellow USC Viterbi graduate student in electrical engineering, he believed wholeheartedly in the Theodore von Karman quote: “Scientists discover the world that exists; engineers create the world that never was.”

While fellow students traveled abroad and spoke of tourist attractions, Ji spoke of “automated production lines and advanced FANUC manipulators” during his 2011 exchange visit to UC Davis. Said Kong, “His eyes shined as if he was still marveling at those things.”

Creativity with a camera

And yet Ji was also the model template of the USC Viterbi engineer, one that in the words of Dean Yannis C. Yortsos, “combines analytical and mathematical skills with creativity and synthesis: A balanced blend of left and right-brain skills.”

An avid photographer, Ji had served as senior press-photographer of the QSC website, a student portal ranked among the top 100 student sites in China. He loved outdoor photography, perhaps owing to his home province in northern China’s Inner Mongolia Autonomous Region, an area known for its epic grasslands and forests. 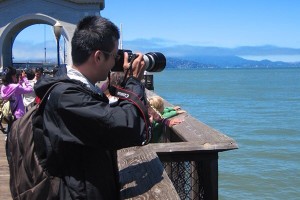 Said Fangyue Zhan, a fellow USC Viterbi graduate student in electrical engineering:  “Photography was not just an interest, but also a way to help friends. I remember it was 3 p.m. in the afternoon when I asked him if he was available to help me take a passport photo. Immediately, he said yes. After light preparation, [camera] angle selection, he took tons of photos for me to pick a satisfactory one, and then edited it. It turned out to be better than a professional one.”

His passing sparked fond remembrances from his friends abroad as well.

A close childhood friend remembered on Baidu.com: “Ji was a bike lover; I was terrible at biking. Ji was a model train collector; I was a military model enthusiast. Ji was a master when it comes to automotive performance; I just got my driver’s license. Ji was almost a professional when it comes to photography; I only know how to use commercial cameras. Ji, an existence that everyone looks up to, and I got to know him this way.”

Among his professors at the USC Viterbi School of Engineering, the loss of such a remarkable talent is beyond comprehension.

“He was one of the best students I had in class,” said Shahin Nazarian, Ji’s instructor for EE 577A: VSLI System Design. “They were given a very challenging project: designing a general-purpose microprocessor, involving both hardware and software design. His teammates told me he was really the main driver; he wanted to make it perfect. He did the whole divider design – the most challenging part. In the end, his team was the top four among 60 to 70 teams.”

According to Ehsan Pakbaznia, a fall 2013 lecturer who now works at Intel: “His overall performance in my class was incredible. Having worked in industry, I looked at him as a top designer.”

He had a knack for “precise, detail-oriented, perfectionism,” said Chen. “Every time he packed a schoolbag, he’d organize the cords neatly, put them into a small bag, and put the computer back into a computer case and then into the backpack. Out of his hand, lines in schematic drawings were clean and ordered, codes modified with comments, simple and clear.”

In the end, Ji often saw the world through his camera lens. And that world, lovely and imperfect, was one that he perhaps was uniquely qualified to make better.

As much as he loved machines, when he got a car in Los Angeles, his first thoughts were elsewhere.

“For him,” said Chen, “the reason to buy a car is helping others. Once he got the car, he sent friends a message, saying he’s willing to offer a ride anytime. From then on, he often drove roommates to Chinatown or picked up and dropped off friends at the airport.”

To honor his memory, Dean Yortsos announced the establishment of the Xinran Ji scholarship, to be awarded annually and in perpetuity to an electrical engineering graduate student at USC Viterbi who comes from China, Hong Kong, Macau or Taiwan.

He was also awarded posthumously his MS degree, which Yortsos presented to his parents on Aug. 1.

A memorial service for Xinran Ji will take place at 3 p.m., Friday, Aug. 1 at Newman Hall.

Friends remember a budding engineer and 'young star' who wanted to record the world, then make it better.

USC remarks from a police press conference announcing progress in the investigation of a graduate student’s death.

Dean Yortsos on the tragic loss of Xinran Ji

The USC Viterbi School of Engineering mourns one of its family members.

An update from Provost Garrett

Police officers have arrested alleged street robbers in connection with the passing of student Xinran Ji, and USC Viterbi prepares for a memorial.