More scholars graduated from USC’s Neighborhood Academic Initiative (NAI) program in 2014 than at any time in the program’s 20-year history.

The 65 graduating students were honored at the program’s annual gala May 8. NAI is a rigorous, pre-college enrichment program that prepares South L.A. neighborhood students for admission to a college or university. All of the students in the high school graduating class of 2014 will continue their education this fall.

“Twenty-one of our students tonight were accepted to USC, and the 19 who will be attending in the fall will receive a full financial package as a result of their hard work,” said Thomas S. Sayles, senior vice president of university relations.

NAI scholar Sierra Williams was accepted to 10 universities including New York University, Carnegie Mellon and University of California campuses in Los Angeles and Santa Barbara, but she’s decided to continue her education at USC. She plans to study biomedical engineering at the USC Viterbi School of Engineering and then go on to medical school. She’s also been accepted to the Rhodes scholar track program along with fellow NAI graduate Nathalye Lopez. Lopez is also a Gates Millennium scholarship recipient and will receive funding for her education over the course of 10 years.

For many students, NAI is a family affair and reflects the university’s longstanding effort to make a positive impact in the South L.A. community. The Garcia family, for one, has seen the program’s benefits. The Garcias will have three students at USC at the same time: 2014 program graduate Bryan Garcia joins brother Jesus Garcia, a sophomore studying computer engineering, and sister Wendy Garcia, a junior majoring in psychology.

The Garcia siblings, all of whom participated in NAI’s theater workshop, put on community Shakespeare productions and have formed the nonprofit Los Angeles Talent Thespian Ensemble to engage and mentor local youth in the arts.

“We will always be part of NAI,” said their mother Isidra Nava Garcia. “We are a USC family.”

Among them is Jasmine Torres, who helped establish USC’s Trojan Guardian Scholars, a program that supports former foster youth at USC.

“I was nominated for NAI when I was 10 years old, and now I will be graduating from USC next week,” Torres said. “I could not be reaching this milestone without the support of the Neighborhood Academic Initiative.” She was one of the evening’s honorees selected to provide words of guidance to the newly minted high school grads. She told the students: “To all the NAI graduates, as you go on to do exciting things, remember that you are powerful individuals doing amazing things, big and small. Never lose sight of your goals. . . Remember that time just keeps moving forward and as it does, you should too.”

USC’s Athletic Director Pat Haden was honored with the Champion of Service Award for his deep commitment to civic engagement and for instilling a culture of service among the university’s athletic programs.

More than 650 student-athletes have collectively completed 13,000 hours of service with organizations such as Marathon for Kids, Children’s Hospital Los Angeles, and Skid Row homeless shelters. 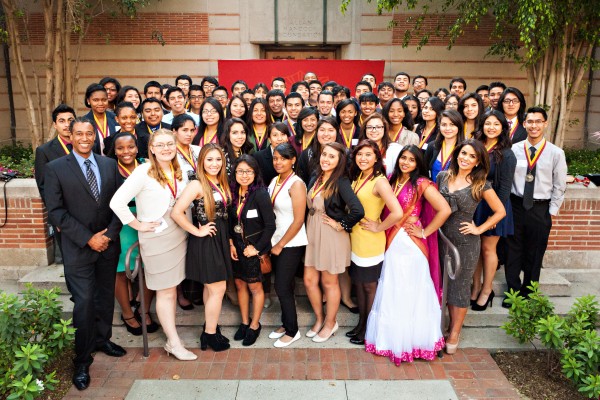 “More than 50 percent of our student-athletes attended high school in Los Angeles County. When they take the field with ‘Trojans’ stitched across their chest, they are competing for this city,” said Haden during his acceptance speech. “Off the field, we need to compete for this city as well, for its youth so that their generation might lead us through a new century of challenges on the streets of Los Angeles.”

NAI students follow a disciplined and regimented schedule for six years and must meet attendance and study requirements. Scholars attend tutoring at USC before and after school and every Saturday. NAI parents also attend Saturday sessions to participate in sessions to foster educational success.

“NAI is really a game-changer in the South Los Angeles neighborhoods, and now we’re expanding to East LA,” said Kim Thomas-Barrios, NAI’s executive director. “So the fundraising efforts are on overdrive.” Actor Mark Hamill (Luke Skywalker in Star Wars) and voice actor Tom Kenny (the voice behind SpongeBob SquarePants), led a special pledge during the gala to raise much-needed funds to aid the program’s expansion.

NAI graduates have gone on to attend USC, Harvard University, the U.S. Military Academy at West Point, UCLA and the University of California, Berkeley, among others.

Since the program’s start, 810 students have graduated from the NAI program and every graduate has gone on to college.

Donors have contributed more than $17.7 million to the campaign since 1994.

USC’s most selective admit group ever

One in eight admitted students would be the first in their families to attend college.