In recognition of his efforts to protect human rights, his commitment to education and his work advancing opportunities for all people, President Barack Obama was presented May 7 with the Ambassador for Humanity Award by Steven Spielberg, USC trustee and founder of USC Shoah Foundation-The Institute for Visual History and Education.

Obama’s acceptance speech centered on the theme of memories and stories — good and bad. Urging the audience to share stories so others can learn from them, he credited Spielberg with safeguarding Holocaust stories before they are lost to history and thanked the USC Shoah Foundation for “setting alight an eternal flame of testimony that can’t be extinguished.”

Obama also thanked the thousands of survivors who shared their painful stories. “None of these stories could be preserved without the men and women with the courage to tell them,” he said.

None of these stories could be preserved without the men and women with the courage to tell them.

Housed in USC Dornsife College of Letters, Arts and Sciences, the USC Shoah Foundation was founded by Spielberg in 1994 to collect and preserve first-person accounts from Holocaust survivors and witnesses. Since its founding, the institute has collected hundreds of testimonies about the Holocaust and other genocides, as well as conducted research into the causes and prevention of genocides.

Spielberg presented Obama with the foundation’s prestigious Ambassador for Humanity Award, noting that the president has created an Atrocities Prevention Board, declared the prevention of mass atrocities and genocide a core national security interest, and has directed the intelligence community to institutionalize a focus on stopping genocide. He also recently appointed the first-ever special envoy to U.S. Holocaust survivors. 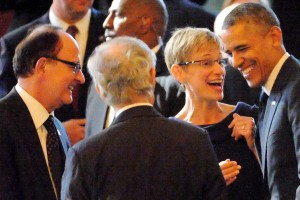 The gala, which also commemorated USC Shoah Foundation’s 20th anniversary, brought 1,200 luminaries from across the political, academic and cultural spectrum to the Hyatt Regency Century Plaza hotel in Century City, Calif., where they celebrated Obama’s award and raised money and awareness for the institute’s work. Comedian Conan O’Brien hosted the event, which opened with an introduction from actor Liam Neeson and included welcoming remarks from USC President C.  L. Max Nikias. Bruce Springsteen provided the musical entertainment and Turner Network Television served as the presenting sponsor.

During his acceptance speech, the president’s tone became especially emotional as he recalled the words of Holocaust survivor Pinchas Gutter, who has long been involved with the institute and says he shares his story for “the purpose of improving humanity—drop by drop by drop.”

“I have this remarkable title right now — President of the United States — and yet every day when I wake up, and I think about [the abducted] young girls in Nigeria or children caught up in the conflict in Syria—when there are times in which I want to reach out and save those kids—and having to think through what levers, what power do we have at any given moment, I think, ‘drop by drop by drop,’ that we can erode and wear down these forces that are so destructive,” Obama said.

Until we learn our lessons

In his remarks, Spielberg said the institute is not only a collection of historical documents, but also “a bulwark” against current events. “The links are clear, but every day in places from Syria to South Sudan, the world has yet to comprehend these lessons,” he said. “As long as we fail to learn, our work will be urgent work.” 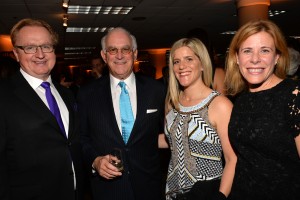 He also urged attendees to do their part to make the world a better place.

“In the face of acts of inhumanity, President Obama has not stood by,” Spielberg said. “He has staked our claim on shaping a better world. He has said that as long as America can do something—be it military, economic, through moral example, or even grassroots inspiration, we will do what we can.”

Nikias, who helped bring the institute to USC in 2006 when he served as the university’s provost, said the world must never turn away from evil.

“When we hear the voices of those in distress, we cannot remain silent,” he said. “Where we see evidence of injustice, we must work to right those wrongs. Where there is hatred and bigotry, we must bring respect and understanding. And when we are able to set aside our differences, only then can we fully embrace our shared humanity.”

USC Shoah Foundation Executive Director Stephen Smith thanked the audience for its continued support and talked about how the institute has grown in the past 20 years.

In addition to the nearly 52,000 testimonies from survivors and witnesses of the Holocaust in the institute’s Visual History Archive, it now includes interviews with survivors of the 1994 Tutsi Genocide in Rwanda and the 1937 Nanking Massacre in Nanjing, China. And in May, the institute gathered about 400 testimonies from survivors of the 1915 Armenian Genocide. Parts of that collection will be integrated into the Visual History Archive in time for next year’s centennial commemoration.

George Clooney was honored in New York with the Ambassador for Humanity Award at the annual gala for the USC Shoah Foundation.

Now comes the “next significant chapter” for the USC Shoah Foundation, says founder Steven Spielberg. Researchers are united by the importance of the work.

The University of Haifa has become the first university in Israel with access to the USC Shoah Foundation Institute’s Visual History Archive.