Endowed scholarships ensure that we can attract talented students regardless of their financial situation.

With construction expected to begin in May and completion set for fall 2016, Fertitta Hall — to be located at the corner of Figueroa Street and Exposition Boulevard, within view of the university’s main entrance — will boost USC Marshall’s undergraduate student classroom capacity by close to one-third. Together with the Uytengsu Endowed Scholarship Fund, the new building will set a national standard for excellence in undergraduate business education.

“Endowed scholarships ensure that we can attract talented students regardless of their financial situation, and the new building will enable undergraduate learning and research to flourish,” said USC Marshall Dean James G. Ellis. “Michael’s dedication to supporting Marshall and its students will directly benefit our community for generations to come.”

A commitment to philanthropy

Originally an investment banker specializing in global infrastructure projects with Salomon Brothers in New York and then in Hong Kong, Uytengsu joined his family’s food business in 1993. 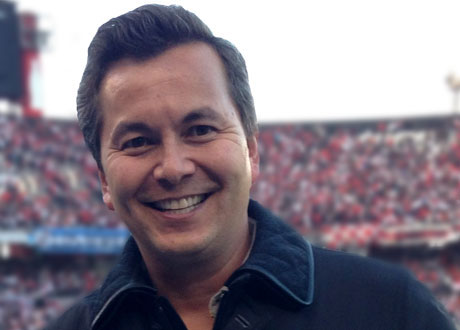 Over the course of a highly successful career, he has orchestrated complex restructurings and roll-up transactions in the U.S. snack food industry, from the merger between Sunshine Biscuits and the Keebler Co. to the formation of National Pretzel, which he sold to Con Agra Foods in 2011. Uytengsu’s recent ventures include HK Anderson pretzels and Somersault Snacks; he also is a founding partner of Tusk Estates, a luxury wine brand in Napa Valley, Calif.

Including brother Wilfred (Fred) ’83, the Uytengsu family has demonstrated a long-standing commitment to robust philanthropic support of USC. A recent $8 million gift from Fred Uytengsu — the largest ever made to the athletics department by a former student-athlete — funded the Uytengsu Aquatics Center, providing a new home for the Trojan men’s and women’s swimming, diving and water polo teams. In 2013, the siblings received the Entrepreneurs of the Year and Alumni of the Year awards from USC Marshall’s Lloyd Greif Center for Entrepreneurial Studies. At the ceremony, Michael Uytengsu announced his intention to donate 1 percent of the equity from his latest business venture, Somersault Snack Co., to USC.

“The education I received at Marshall gave me a strong foundation for success,” he said. “My family believes in the importance of giving back and in making a difference for students who are eager for an education but may not have the means to access it. If all USC alumni who own businesses would contribute a portion of their profits to the school, the students and the alumni would both benefit immensely.”

The gift is part of The Campaign for the University of Southern California, a multiyear effort to secure $6 billion or more in private support from individual donors, foundations and corporations. At the time of its launch, the campaign had the largest fundraising goal ever announced in higher education; to date, more than half that amount has already been raised.

Felix, the most decorated U.S. track and field athlete in Olympic history, is a frequent collaborator with the university and a women’s rights advocate.