The Center for Advanced Genocide Research, which aims to study how and why mass violence occurs, has been established at the USC Shoah Foundation — The Institute for Visual History and Education.

The center will study how to intervene and stop genocide in addition to understanding its causes. Housed in the USC Dornsife College of Letters, Arts and Sciences, the center will serve as the research and scholarship unit of the USC Shoah Foundation, building on the foundation’s 20 years of gathering testimonies of Holocaust and genocide survivors. It will also integrate the Resisting the Path to Genocide research cluster that has opened new avenues of research on mass violence and been part of the interdisciplinary Dornsife 2020 initiative for four years. 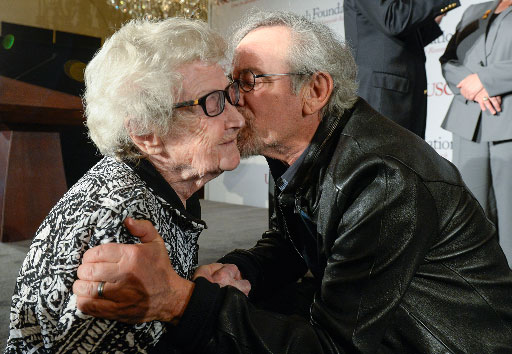 Several USC faculty members and leaders participated in a panel discussion after the announcement, including Steve A. Kay, dean of USC Dornsife College of Letters, Arts and Sciences; USC Shoah Foundation Executive Director Stephen Smith; Wolf Gruner, holder of the Shapell-Guerin Chair in Jewish Studies and professor of history, who will serve as director of the center; and Beth Meyerowitz, USC vice provost for faculty affairs.

Gruner stressed that the center will enable international researchers and scholars to collaborate and come together at a single institution to study genocide in ways that would otherwise be impossible.

Meyerowitz described how her own students were transformed by testimony in the Visual History Archive as they each find profound ways to study genocide through the survivors’ stories. Because no one person could ever watch all 52,000 testimonies, it is vital to convene scholars who can work together to study the collective experiences of genocide survivors, she said.

“Each one of those testimonies represents true expertise — an expertise that should be understood by the academic world we live in,” Meyerowitz said. “If we don’t have some way of approaching this from a big data, humanities, social sciences and sciences research perspective, we’re not allowing those 52,000 people to speak to us with their unique expertise that cannot be duplicated by any other medium.”

The Center for Advanced Genocide Research will focus on interdisciplinary study organized around three themes to advance the analysis of genocide and systematic mass violence on an international scale.

“By combining ongoing research with the vast amounts of information already collected by the USC Shoah Foundation, I believe we will be able to decode the conditions that can lead to genocide,” Kay said. “And by funneling what we learn through our Digital Humanities program, we will be able to teach tomorrow’s leaders new ways of stemming the tide of violence and intolerance.”

Original documents from the Holocaust

The center will position USC as the only world-renowned private research institution with substantial original material from the Holocaust and other genocides:

“We need to better understand the causes and consequences of violent and genocidal societies,” Smith said. “By building on the robust genocide research opportunities already in place at USC, we will be in a position to have a real impact in the field.”

Added Gruner: “With its fellowship program, future conferences and chairs, the new research center will create an intellectual hub for international and interdisciplinary scholarship on the topic of Holocaust and genocide studies. Los Angeles is home to the largest survivor communities of several genocides, including the Cambodian and Armenian genocides. They will act as a constant reminder of the importance of our task.”