USC’s 140th commencement ceremony will be headlined by one of the most influential figures in filmmaking today: Kevin Feige, producer and president of Marvel Studios.

Feige will give the keynote address at the ceremony on May 12.

A 1995 graduate of the USC School of Cinematic Arts, Feige is head of Marvel Studios, the home of the Marvel Cinematic Universe, a collection of interconnected films and streaming series that has made an indelible mark on popular culture and filmmaking.

He sat in the same seats and walked the same paths as so many of our students — and look where his adventure has taken him.

“He sat in the same seats and walked the same paths as so many of our students — and look where his adventure has taken him. I can’t wait to hear his inspiring stories.”

Feige has maintained a close relationship with his alma mater and serves on the Board of Councilors at the School of Cinematic Arts. In 2017, the Academy Award nominee established a fund to foster success for cinema students at USC. The Kevin Feige Endowed Fund for Creative Producing supports courses that teach budding filmmakers how to turn an idea into a successful commercial release. Feige is also the 2014 recipient of the Mary Pickford Alumni Award for achievements that have brought distinction to the school and the entertainment industry. 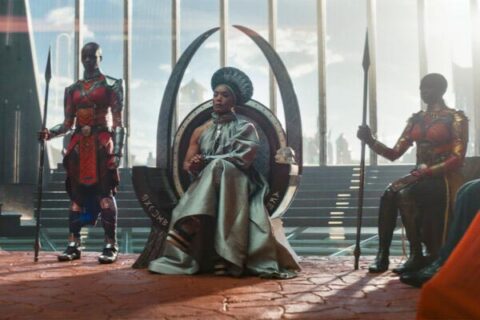 Among the productions in the Marvel Cinematic Universe: the blockbuster Black Panther: Wakanda Forever. (Photo/Courtesy of Marvel Studios)

“My USC experience played such a fundamental part in who I have become, both as a filmmaker and as a person,” Feige said. “Of course, they never have to ask me twice to come back and talk with students, but I’m honored and humbled to be asked to be the commencement speaker celebrating the 2023 graduating class as they carry their own USC experience into the world to do big things as part of the next generation of storytellers and innovators and leaders.”

Feige, who returns frequently to campus for screenings and to talk with students, serves as an inspiration for students at the world’s top film school.

“Feige is an outstanding role model for all SCA students, as creative producing is a core competency across the breadth of the school’s curriculum, a hallmark of the industry’s best practitioners,” said Dean Elizabeth Daley of the USC School of Cinematic Arts.

Since 2021, Marvel Studios has released eight streaming series on Disney+, including the Emmy Award-winning shows WandaVision and What If…? as well as the critically acclaimed series Loki and Ms. Marvel.

Feige was honored with the 2019 David O. Selznick Achievement Award from the Producers Guild of America, as well as the Albert R. Broccoli Britannia Award for Worldwide Contribution to Entertainment from the British Academy of Film and Television Arts (BAFTA) in 2018.

USC’s 140th commencement ceremony will be held May 12. It begins at 8:30 a.m. at Alumni Memorial Park on the USC University Park Campus.