Amid the high-energy atmosphere of pre-football tailgate celebrations on McCarthy Quad, you might spot a small electric cart weaving like a centipede through rows of tents, port-a-potties and a phalanx of cardinal and gold jerseys.

It moves slowly, stops often and draws selfie-seeking fans who think the mobile recycling station — sometimes referred to as the “Waste Ed Wagon” — is kind of cute. 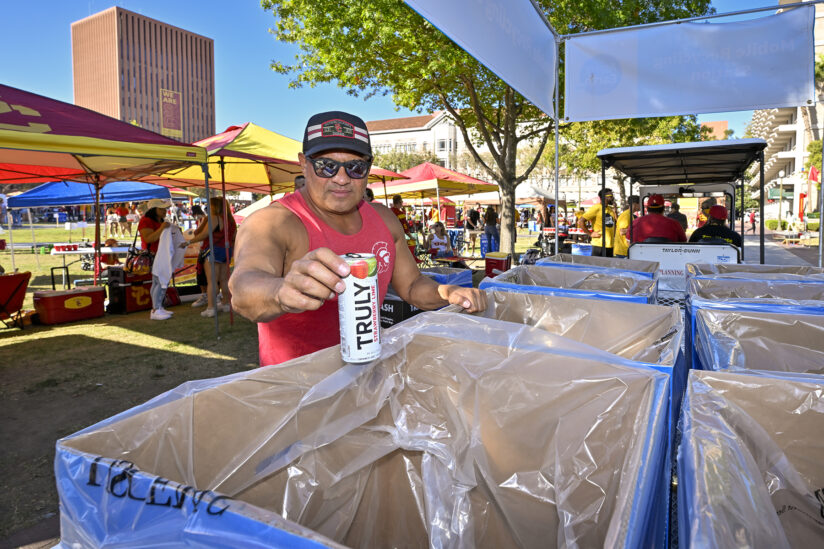 The setup is simple: Under a banner sporting the familiar “Assignment: Earth” logo, a trailer carries eight cardboard recycling bins. Nick Belgrave and Josh Rebello, the university’s zero waste auditors, walk alongside the cart engaging Trojan fans to talk about what’s reusable and what’s not.

“The fans have great intentions, and they’re into recycling,” Belgrave said. “We were getting a lot of stuff put into recycling bins at tailgate celebrations. But a considerable amount of that wasn’t recyclable. It was trash.” 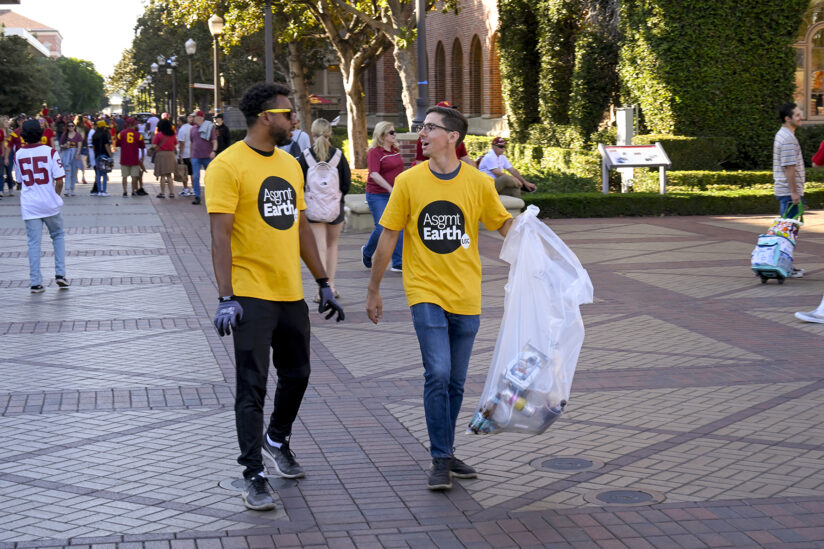 It’s a separation issue the zero-waste team encounters often: a matter of what goes where. A prime example are ubiquitous red plastic cups. Many if not most fans seem to believe the cups are easily recyclable. They are not.

That bit of information alone has increased proper tailgate sorting, yielding more than 800 pounds of recyclables so far this season.

Now, the zero waste team is looking to expand on that success. The wagon’s route, which primarily runs around the quad, is expanding to include Trousdale Parkway with additional bins on the way.

Josh Rebello audits trash, compost and recyclables for a living. The data he produces drive sustainable practices at USC, where multistream recycling is expanding.

In a move taken by only a handful of universities, USC aims for carbon neutrality. By 2025, USC will have improved its energy efficiency and expanded the use of solar power. USC also has made sustainability a core part of its curriculum, fostering global citizens who will fight climate change.

A year of remarkable accomplishments on the road toward sustainability

Year in review: The year marked a number of milestones as USC continues its efforts to fight climate change starting at home.

Those single-use bottles are on their way out as water refill stations proliferate on USC’s University Park and Health Sciences campuses.