While not a binding document that anyone signs, the “student commitment” introduced Thursday at USC’s new student convocation is designed to be woven into the fabric of everyday Trojan life.

As students gathered in Alumni Park to commemorate their formal induction into the Trojan Family, they became the first group of incoming USC students to learn about the student commitment.

“This is a student-focused blueprint for living out our values as we learn, work, and grow together as a community,” said Monique S. Allard, interim vice president for student affairs.

The values we’ve spent years crafting are expressed fully in the commitment, which describes the responsibilities we share as a Trojan Family.

“The values we’ve spent years crafting are expressed fully in the commitment, which describes the responsibilities we share as a Trojan Family.”

Among the aspirations from the commitment: to act with integrity in the pursuit of excellence; to embrace diversity, equity and inclusion; to promote the well-being of themselves and others; to engage in open communication; and to be accountable for their actions.

“When we emphasize respect for all, champion diversity and always strive for integrity, accountability and fairness, we build and strengthen the culture of USC,” Allard said. “In doing so, we make it possible for every Trojan to reach their fullest potential.” 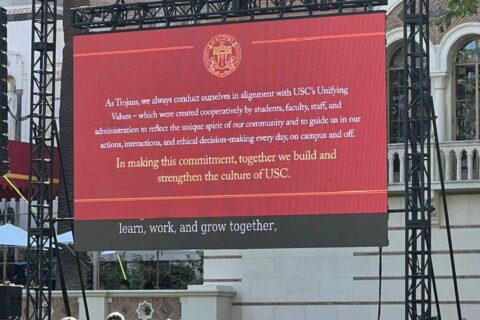 The student commitment is displayed on screens during Thursday’s convocation ceremony. (Photo/Greg Hernandez)

The full text of the commitment appeared on giant screens set up in Alumni Park, but Allard encouraged the group to take some time to read it more carefully later in their Student Handbook.

The commitment is also posted on the Student Affairs website and will be referenced on digital screens throughout campus and in student residences.

“Nearly three years ago, it was students — working alongside faculty, staff, administration and many others across our community — who began a journey to redefine our core USC values,” Allard said. “I’m excited to share with you one of the fruits of that hard work.”

In 2019, the USC Office of Culture, Ethics and Compliance invited students, staff and faculty to participate in a values poll. More than 9,000 students took part in the survey, which was followed by 60 student discussion sessions. Other sessions were held with faculty and staff.

In all, nearly 20,000 Trojans participated in the process that resulted in 2020’s six unifying values, followed the next year with a reimagined and closely aligned USC Integrity and Accountability Code for faculty and staff. The student commitment is being issued to bring awareness of those values and to serve as a catalyst for discussions about university culture and what is expected from students.

“Culture can mean different things to different people,” Allard said before speaking at the convocation. “Not every student will interpret the unifying values or the commitment statements in exactly the same way, and that’s OK — our diversity is a strength. The important thing is that students understand that the student commitment reflects principles that are the backbone of the culture we all contribute to at USC.

“If every student embraces the commitment in a way that is meaningful to them, it will give us shared language, help bind us together as a community and offer us guidance when confronting complex challenges.”