Alana Fesili knew it would be tough to leave her family behind when she moved into USC’s Birnkrant Residential College this week — so she brought them along with her.

Fifteen members of her family, most wearing USC apparel, left their homes in Oceanside at 5 a.m. on Monday to caravan to the University Park Campus and help Fesili settle in.

“I always feel my family’s love,” said Fesili, 18, as she sat with her mom, dad, five siblings, grandparents, aunt, godparents and cousins in the Birnkrant lobby.

“I know I’m going to cry when they leave me,” the sociology major admitted. “Their support is just amazing. I didn’t want to be too far, but I wanted to be far enough to where I could learn and grow on my own.” 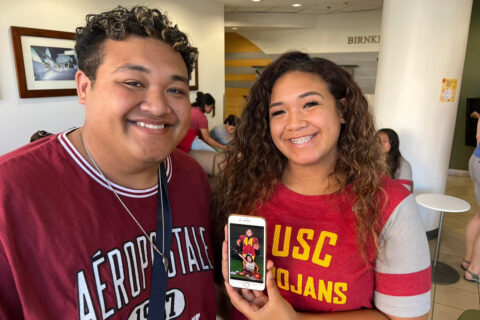 UCLA student Sammy Fesili left his Bruin gear in Westwood to help his younger sister move in. Note the cellphone photo in which both are wearing Trojan colors. (Photo/Greg Hernandez)

Fesili is among the 8,243 first-year, returning, transfer and graduate students making themselves at home in USC’s residential colleges during move-in week, which concludes Wednesday.

Students are encouraged to bring items such as face masks, towels, blankets, sheets and pillows, toiletries, a computer and a television. But pets, electronic skateboards, electric scooters, hoverboards, coffee makers, vacuums, candles and air conditioning units had to be left at home.

As families focused on checking out bins and dollies and unloading suitcases and duffle bags from their vehicles, emotions never seemed far from the surface.

“I don’t want anyone to see my tears,” said a sunglasses-clad Absalom Fesili, Alana’s dad. “She worked so hard in high school and played basketball but was so focused on her academics. This is the school she’s always wanted to go to.”

Older brother Sammy Fesili, 21, attends UCLA, but the Bruin spent the morning on the rival Trojan campus with the rest of the family to show his sister support. 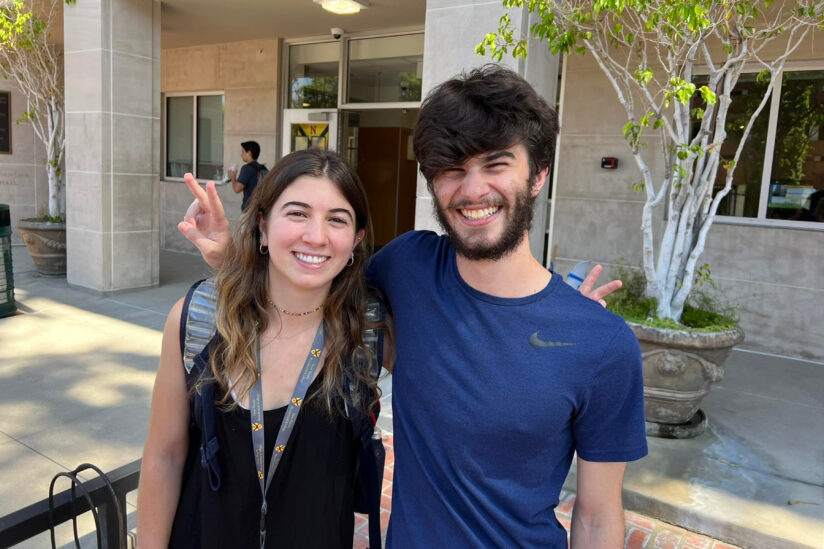 First year student Katie Rube has a friendly face nearby: Her brother Charlie is a USC junior. (Photo/Greg Hernandez)

New USC student has a friend across campus — her brother

Katie Rube, who moved into New North Residential College on Monday, is happy to have her older brother starting his junior year at USC as she begins her first as a sociology major.

”I’m a little nervous but excited to try something new,” she said. “I’ve been on campus a lot to visit my brother, and I realized I didn’t want to leave. That was a good sign.”

The siblings from Westchester, N.Y., are close and say they always have each other’s back.

“I always hoped she’d come here,” said Charlie Rube, 21. “It’s my first choice for her and I did a lot of selling of the school, so it all has to go well. I think it will. I’m so psyched that she is here and is going to be finding her place.” 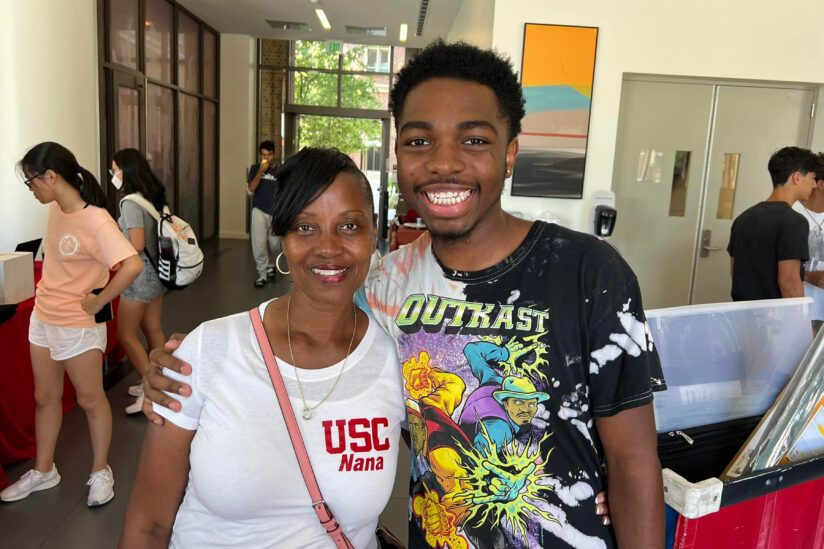 Also from the East Coast is Davon Collier, 18, who made the journey from Baltimore to USC over the weekend with his parents and grandmother.

As the family waited for an elevator inside McCarthy Honors College, Collier recalled the day he got his USC acceptance letter: “I cried. I cried. I literally called one of my best friends and I was crying. She said, ‘Who died?’ and I said, ‘No! I just got into my top choice!’ I called everybody in my contacts crying.”

His grandmother, Bertina High, wore a “USC Nana” shirt for the occasion and beamed with pride.

“We were hoping and praying that he’d be accepted as a full scholarship student, and we’re just so happy and so proud of him,” High said. “We’re just blessed because he has done an extremely good job in high school. This is the No. 1 school that he wanted to come to, and he made that happen.”

The Baltimore School of the Arts graduate plans to stay focused as he begins his freshman year at USC School of Dramatic Arts.

“I just hope to maintain the good grades and, of course, enjoy myself and get the most out of my education here,” he said. 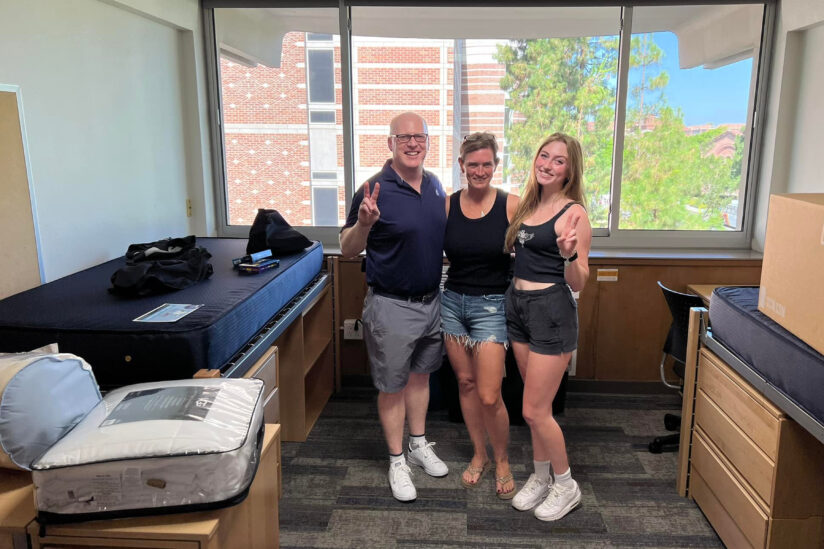 For USC alumna Sally Friedewald, move-in week felt like déjà vu as she moved her 18-year-old daughter, Ellie, from their home in Chicago into Birnkrant.

“It’s so exciting and I feel like I’m reliving college through her eyes,” she said. “I wanted her to go wherever she wanted, but now that she’s here, it’s really fun for me to see and to be back on campus.”

Dad John Friedewald, a graduate of Princeton University, is fine with his daughter choosing USC instead of his alma mater.

“I’m overcome with emotion with her leaving the house, but I know she’s going to do great and it’s going to be life-changing for her,” he said.

As her parents organized her room, the human biology major reflected on the enormity of the occasion.

“I’m sad leaving them, but I’m an independent type so I’m also very excited to be on my own,” she said. “And I love L.A.” 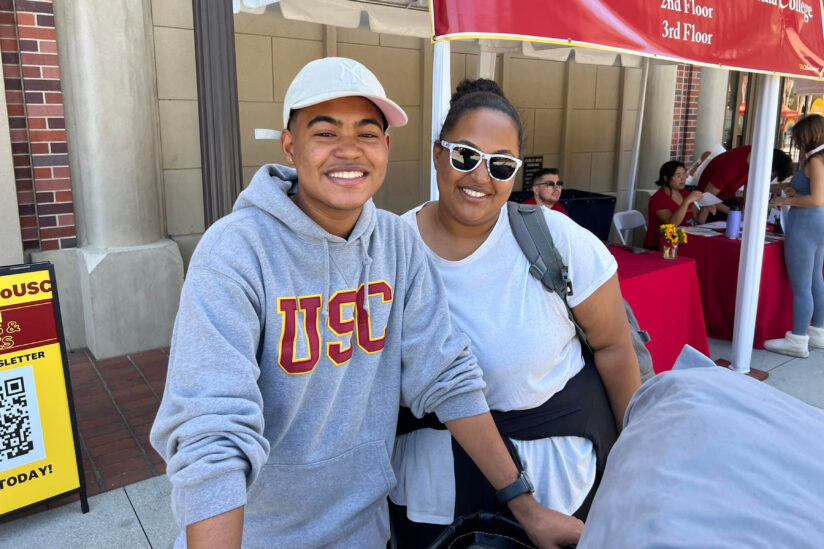 “I’m nervous because it’s my first time this far away from home,” said Guzman, who grew up in New York City. “USC was one of my first choices from the beginning of the application process, so with that nervousness comes excitement.”

His mom, Alexandra Cerda, stood outside of Leavey Honors Hall with her son and joked that he is required to call her at least once each day and to come home for every holiday.

“When he picked USC, I said, ‘Whaaat? You’re crazy!’” she said, laughing. “But I was excited that he thought that big and didn’t want to just stay so close. I’m excited for him and his new journey.” 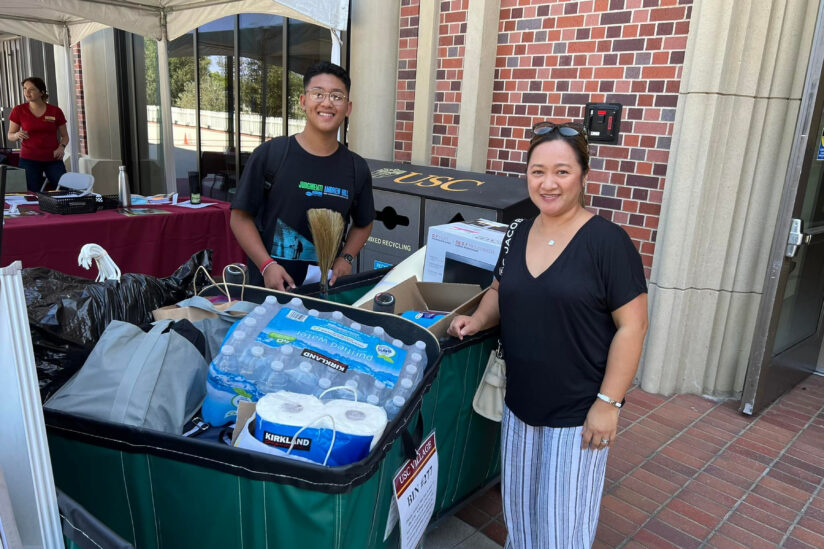 Myra Revale was one of the calmer parents on campus on Monday as she helped move her 19-year-old son, Kyle, into Cowlings Residential College. The civil engineering sophomore lived in Cale Residential College during his freshman year.

“This year I feel quite secure and confident because he had his first year and did well,” the mother said. “The staff, the school and the security are amazing. I think we are in good hands and he’s here in USC Village where almost everything is here, and he doesn’t need to go far.”

Kyle Revale had some advice for the new students on campus: “Just talk to everybody. There’s a lot of cool people here at USC and I feel like that’s what helped me get through.”

Admission offers are out to almost 8,200 would-be students around the globe.