America’s national parks are in crisis, and the environmental disaster unfolding at Yellowstone National Park is the latest example of extreme weather driven by climate change battering parkland.

Glacier National Park in Montana is also experiencing severe flooding, in addition to the severe diminishment of the park’s 26 named glaciers — some by as much as 80%. 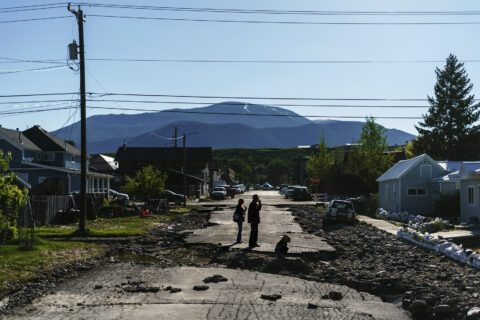 Pedestrians examine a street that has been washed away by flooding in Red Lodge, Mont., northeast of Yellowstone National Park. (Photo/David Goldman, The Associated Press via Shutterstock)

The U.S. national parks are a passion for Douglas Noble, associate dean for academic affairs at the USC School of Architecture. He credits a childhood spent visiting the parks as a Boy Scout for cultivating his love of America’s wilderness. This spring, he and faculty across USC introduced a new interdisciplinary course, “An Exploration of America’s National Parks,” that centers on how humans interact with the national parks. We spoke with Noble about the flooding at Yellowstone, how climate change affects our national parks and his favorite national park.

What does the situation with Yellowstone flooding tell us about how climate change is affecting the national parks system?

The climate conditions are really troubling. It’s not so much that it’s warmer — people will say, “Oh, it’s only 2 degrees warmer, what possible harm could that cause?” First off, 2 degrees centigrade is a big jump. It also changes the kind of things that can live or adapt to be there. It also changes migratory patterns. Water access in some places will dry up, and the lifeforms that lived where a tiny creek or pond used to be can no longer survive. 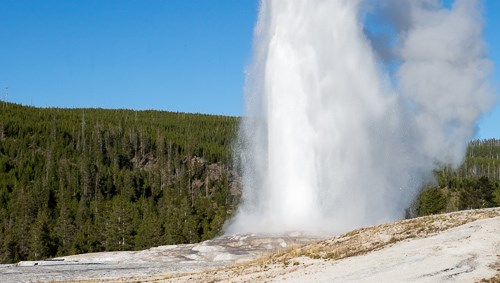 Yellowstone is a water-based place. Old Faithful, for instance: If you visit, there’s a chalkboard that says how often it will erupt — usually around 55-65 minutes — and they’re usually accurate to within a minute. But what happens when the conditions have changed? If there’s more water? What if there’s less? What has been a fairly predictable phenomenon now becomes an unknown. Maybe it erupts twice as often, or maybe it stops altogether. That’s all to say we no longer can entirely know what’s going to happen because the conditions have changed.

What is the impact of this unpredictability?

If you know what’s going to happen in a climate, whether it’s hot or cold, then you can make confident personnel and resource decisions to maintain the parks. There are impacts on tourism and agriculture — you know that based off predictive weather models that the last frost will take place after such-and-such date. If suddenly it’s less predictable, there might be another frost later in the season, it could be warmer, it stops raining sooner or it might rain a lot harder. I’m a lot happier when things are just like last year — even if last year there was a week in the summer where it was too hot in L.A. — because I know that if we do the same as last year, we know how it works and we know what the impact is going to be.

In what other ways is climate change affecting the national parks?

Not long ago the biggest challenges were wildfires and, again, it goes back to climate change. Part of it was direct impacts — the fires wiping out vast chunks of forests — but it also affected the management strategies in place. Now we look back and say, “OK, maybe that was not a great strategy putting out all fires” because the amount of debris and dead stuff piled up. Where there had been a fire here and there to clear that debris, once we began putting out every single fire the amount of dead stuff really begins to pile up. Now when it catches fire, instead of 1,000 little fires, you get a really big one and the really big ones act a lot differently.

Glacier National Park has a rough idea when the last glacier will finally melt down. They can tell you how many there used to be just a few years ago, and how many there are now — the number is fewer and they’re smaller. In some cases, a lot smaller and they keep shrinking. How much longer do they have? It’s decades, not centuries. 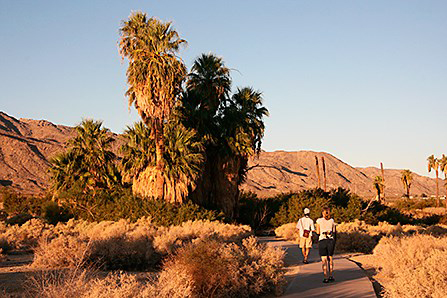 Visitors taking a morning stroll around the Oasis of Mara. (Photo/Courtesy of the National Park Service)

I always answer that question by saying that it changes every time someone asks. There are 63 that many people think of as the so-called “regular” national parks, and almost 450 National Park [Service] units, including national battlefield parks, national historic sites, national monuments and others. Some are like Yellowstone that are large, and then there are others where something culturally important took place. I’m going to Joshua Tree this weekend, so maybe that is my favorite today. Climate change is being felt there, too. There are a small number of oases in the park — one of the most famous is the Oasis of Mara, which has been used by civilizations for millennia. There are six oases in a park nearly the size of Rhode Island, so these are rare treasures. Now the water table has fallen so much that the Oasis of Mara would die without human intervention. We’re keeping it alive in the hopes that things will change for the better.

If we lose ‘America’s best idea,’ we lose our tie to the Earth, President Folt tells national parks class

EARTH WEEK: The president — an environmental scientist — shares her love of the national treasures that sparked her love of science and discovery during the runup to USC’s Earth Week observance.

Human behaviors change constantly and shift in response to numerous factors such as changes in public policy and the arrival of new technologies. All those changes and more are hard to predict, and they affect tomorrow’s costs.