Taking the stage at the Hollywood Bowl is electrifying for a performer: the hum of an expectant crowd tiered out of sight; cool breezes sweeping out the heat of the summer day; the stars overhead and the moon setting over the Hollywood hills. This experience and the prestige that comes with it are the high point of an artist’s career and have spawned numerous “Live at the Hollywood Bowl” albums.

Over the past four decades, hundreds of Trojan Marching Band members have gotten this thrill. More than 90% of band members do not major in music and won’t pursue a career in the field past graduation. For those amateur instrumentalists – who never dreamed of playing on the same stage as the world’s greatest musicians – performing at the Bowl is the musical experience of a lifetime.

A new generation of USC band members will have this experience at three performances this summer as the Hollywood Bowl celebrates its 100th anniversary. On Opening Night last Friday, the Trojan Marching Band teamed up with the UCLA Marching Band to accompany headliner Gwen Stefani. In what was billed as their “first-ever joint performance,” the two university bands performed in the crowd and onstage for Stefani’s “Hollaback Girl” encore — complete with fireworks, of course.

Trojan Marching Band returns to the Hollywood Bowl this Saturday

This Saturday the two bands will return to the Bowl as rivals in a “battle of the bands” at the free 101 Festival. Later this summer, the USC Band will accompany the Los Angeles Philharmonic for the annual Tchaikovsky Spectacular, performing the finale of the “1812 Overture.” 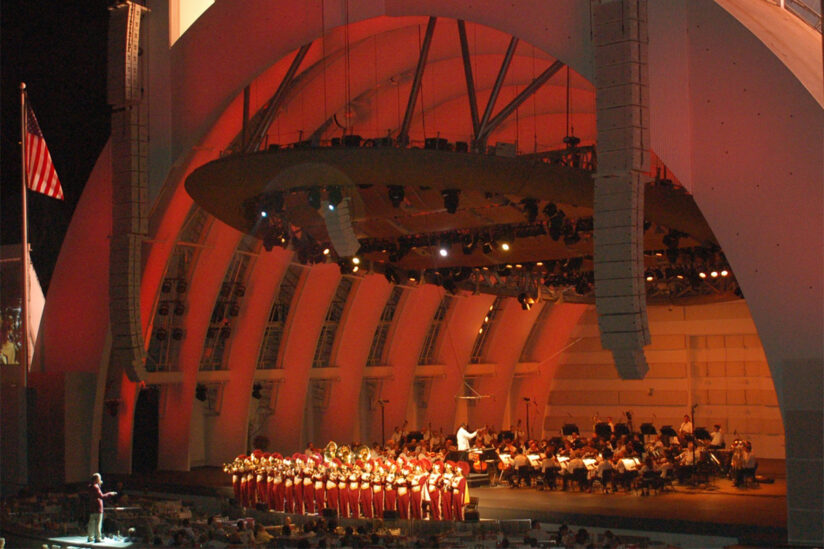 Playing the Tchaikovsky Spectacular every summer is a tradition for the Trojan Marching Band dating back to 1983, but the organization’s history at the Bowl began in 1954 when the Trojans performed there before a campaign speech by President Dwight Eisenhower. During the late 1950s and 1960s the band played regularly at USC’s Songfest fraternity competition at the Bowl, but it wasn’t until the late 1970s that the band began performing annually at the venue. The Los Angeles Philharmonic’s General Manager Robert Harth asked the band to close the Fourth of July concerts — but not necessarily because of the Trojans’ musical reputation.

“The L.A. Phil did not want to play during the fireworks show and especially the string players because of the residue from the explosions,” says Arthur C. Bartner, director of the Trojan Marching Band from 1970-2020. “So we’d march out on stage while the L.A. Phil was packing up and play Sousa marches.”

The Trojan Marching Band proved its worth, however, and in 1982 they performed the entire Fourth of July show, sitting in full uniform to play patriotic songs, popular rock hits and, of course, the USC fight songs.

With the band’s bona fides secure, the Trojans have been asked to perform numerous other events at the venue in the decades since. They performed for John Williams’ induction into the Hollywood Bowl Hall of Fame’s inaugural class in 2000, played with Sheila E at 2013’s Playboy Jazz Festival and accompanied The Go-Go’s for Opening Night in 2014. That same year, at Dreamworks’ 20th anniversary concert, the band performed the soundtrack for the animated movie The Croods under the direction of composer Alan Silvestri. During the performance, concert emcee Jack Black ran onstage in full USC band regalia, wielding a sword.

And since 1983 the band has backed up the Los Angeles Philharmonic and other orchestras for the finale of Tchaikovsky’s bombastic “1812 Overture,” complete with coordinated fireworks lighting up the Hollywood Hills.

Typically scheduled for two nights in August, the band has had the honor of performing under the baton of acclaimed conductor Gustavo Dudamel. The band’s 2015 performance under the direction of Dudamel is included on the Hollywood Bowl 100: The First 100 Years of Music vinyl box set that went on sale Opening Night.

Last summer, the Tchaikovsky Spectacular was one of the first performances for the band after being separated during the pandemic. It was also one of the first conducting duties for current Trojan Marching Band director Jacob Vogel.

“As a musician myself, I’ve never had the opportunity to play on the stage at the Hollywood Bowl,” said Vogel. “However, what’s exhilarating to me is to be able to provide these opportunities for the incredibly diverse student body within the band. I was thrilled that one of our first performances back together was back on the Hollywood Bowl stage. And now in my second summer as director, I will be able to bring my students back on the stage three more times.”

The Southern California native will take over direction of the band on Jan. 1, 2021, after four years as its associate director and arranger.