When Keck School of Medicine at USC graduate student Carla Ibarra came out as a transgender woman nine years ago, she endured the loss of family members and friends who didn’t want to associate with her anymore. With help from a support network, she learned to stop hating herself and the body she was born in.

USC’s LBGTQ+ Student Center supervisor Ab Monzón said the event’s theme honors Ibarra’s story and others like hers — ways in which LGBTQ+ communities find power by coming together.

Pride celebrations provide opportunities to heal and celebrate. But as numerous anti-LGBTQ+ laws are written and passed across the United States, Monzón encouraged attendees to “find your community and lend your voice to a collective movement.”

Monzón added, “Always press for the right to live, to thrive as our authentic selves. … We all deserve the opportunity to figure it out [and] to live the way we want to.”

Lindsey Morrison, a process architect at Keck Medicine of USC, described how a teenage experience inspired her to build community in the workplace.

“[I realized that] if [queer] spaces don’t exist to be fully myself, then I can create that,” Morrison said.

So seven years ago, she led a small group of LGBTQ+ staff, faculty and students to create what is now Keck Pride. This resource group helps foster a welcoming environment for LGBTQ+ patients, families and employees across USC’s Health Sciences Campus.

Morrison has found it reassuring to be able to create a community among her colleagues at Keck Medicine of USC.

“The beauty is, I’m never going to be alone,” she said. “We will always find our people.”

In her remarks, President Folt highlighted the ONE Archives at USC Libraries — home to the most extensive collection of LGBTQ+ research materials in the world — and recalled a 1974 invitation to a Hollywood Pride parade that read: “United We Stand.”

That timeless message echoes USC’s theme for this year’s Pride Month, she said, adding: “USC will always be a safe place for our LGBTQIA+ community.” 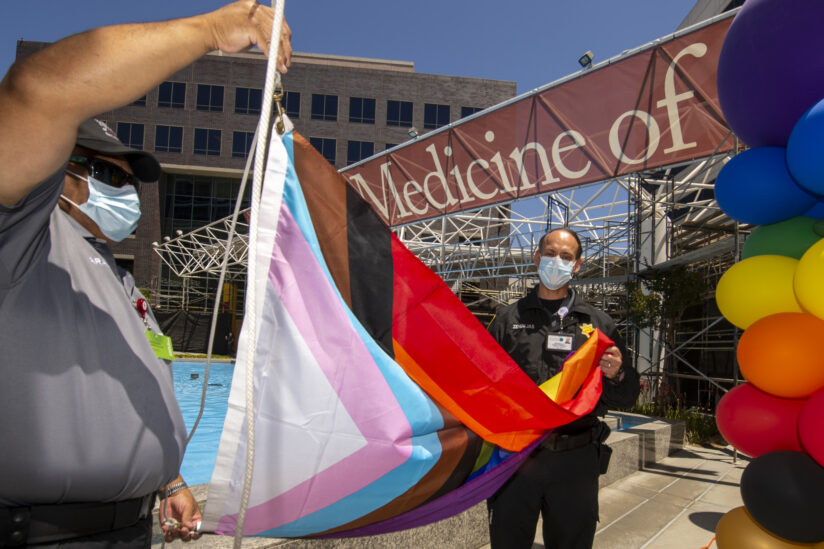 The Progress Pride Flag will fly in front of Keck Hospital of USC throughout June. (USC Photo/Gus Ruelas)

Shortly before Wednesday’s virtual event, the Progress Pride Flag was raised in front of Keck Hospital of USC. For the first time, it will fly there during the entire month of June.

The Progress Pride Flag adds a five-colored chevron to the classic Rainbow Flag, representing marginalized LGBTQ+ communities of color, along with the colors of the Transgender Pride Flag.

Rodney Hanners, president and CEO of the USC Health System and Keck Medicine CEO, hosted the event with Keck School of Medicine Dean Carolyn C. Melzer. “I couldn’t be happier to join an organization committed to LGBTQ+ health and well-being,” said Melzer, who joined USC in March.

LGBTQ+ Pride Month takes place each June in honor of the 1969 Stonewall uprising in Manhattan, a tipping point for the gay liberation movement in the United States.

A complete list of USC Pride Month events can be found on the university’s event calendar.

The poet and performer wants his art and his own experiences as a Black, queer undergrad to help guide underrepresented members of the USC student community.