About 30 minutes before the start of commencement on Friday, soon-to-be USC School of Dramatic Arts graduate Nico Fife couldn’t find his family for a planned pre-ceremony huddle.

His mother reached him by phone and steered her son to her seat near the Mark Taper Hall of Humanities. She knew her way around the USC campus because it was once her stomping ground too.

Ana Maria Fife, who graduated with a USC bachelor’s degree in Spanish in 1989, was preparing to watch her son receive his own Bachelor of Arts degree 33 years later.

“I remember being here graduating with my own parents, and they’re not here anymore, so it’s emotional today,” Fife said. “I had a great experience here, and my son did too. Even during the pandemic, he managed to make the best of it.” 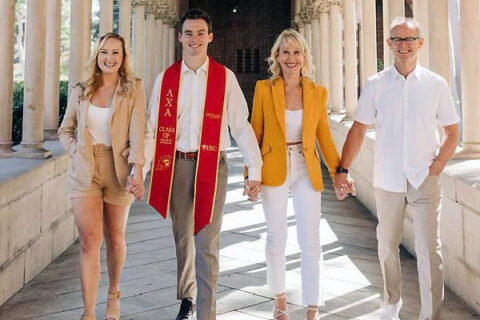 Nico Fife was among many graduates who decided to follow in the footsteps of a Trojan parent — or parents. Some always knew they were destined for USC, but Fife had been accepted to five universities and didn’t make his decision until he took a campus tour.

“I knew my mom had good memories and when I came on campus as a prospective student, it was just this great feeling,” he said. “I knew this was just the place for me, and it has lived up to that expectation 100%.”

It starts with USC onesies

Ana Maria Fife said she never gave her son the hard sell, but 1980 USC graduate Tom “Tiger” Nyberg, who graduated with a degree in biology, joked that he put both his children “in USC onesies.”

“I made them go here,” Nyberg said before the ceremony in which his son, Alex, would be receiving a bachelor’s degree from USC Marshall School of Business. His daughter, Stephanie Nyberg, graduated three years ago with the same degree from USC. 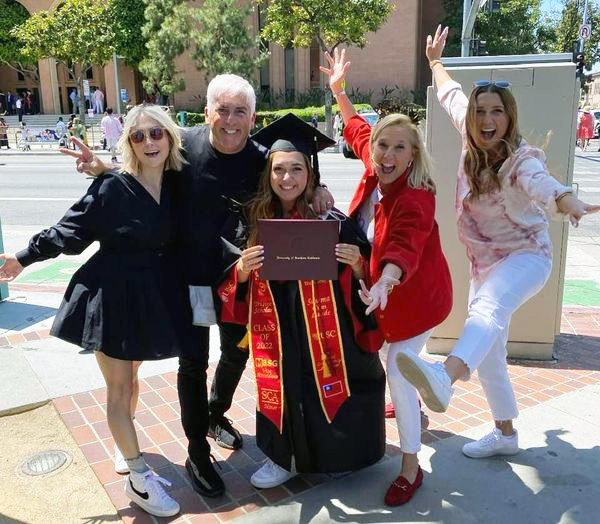 The Goldfarb family poses around their latest grad. (Photo/Courtesy of David Goldfarb)

“It’s awesome that my brother is graduating from here too,” the sister said.

Their mother, Christa Nyberg, is the family’s only Bruin. She graduated from UCLA in 1980 and was on the swimming team.

“I’m a converted USC fan because all my money went here,” she kidded. “We had been taking them to games, and they had grown up on the USC campus coming here for different events, so they always wanted to come here.”

David Goldfarb knew the drill for USC graduations: He arrived on campus before 7 a.m. Friday to stake out seats for his family. His daughter Carley was graduating from Marshall. Four years earlier, his daughter Mallory graduated from the USC Annenberg School for Communication and Journalism. His eldest daughter, Nicole, is a 2016 USC graduate and is working on a master’s degree.

“It doesn’t get old for me,” said a smiling Goldfarb, who graduated from USC in 1986 with a bachelor’s degree in accounting. “I still have my greatest relationships and friends from here. It’s a part of life, and it was one of the greatest times that I had. I think my girls have really benefited from the school.” 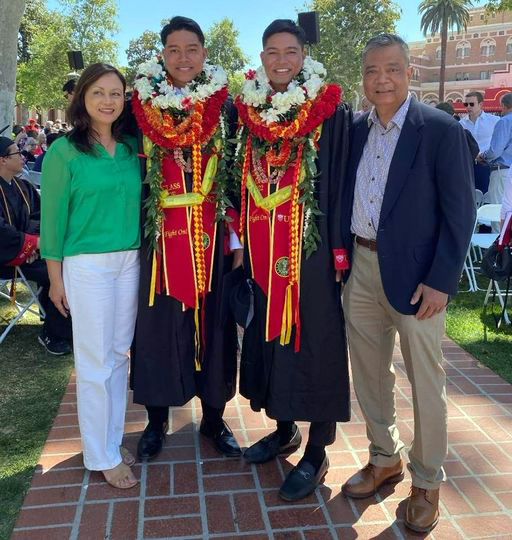 Alfred Ines earned a biology degree from USC in 1979 but because he lives in Hawaii, he has rarely returned to campus. On Friday, he had two reasons to be here: Twin sons Andrew and Aaron each received bachelor’s degrees from the USC Viterbi School of Engineering.

“It’s a full-circle moment,” he said before the ceremony. “I never thought I’d come back here, but it is such a blessing. This was their first choice. I didn’t push them, but the fact that I came here, I think that might have mattered.”

Jonathan and Alva Lai were also feeling nostalgic as they waited for commencement to begin. They met as USC students in the 1990s when they lived in the same apartment building. Their son, Jonah, received a bachelor’s degree from USC Leventhal School of Accounting. 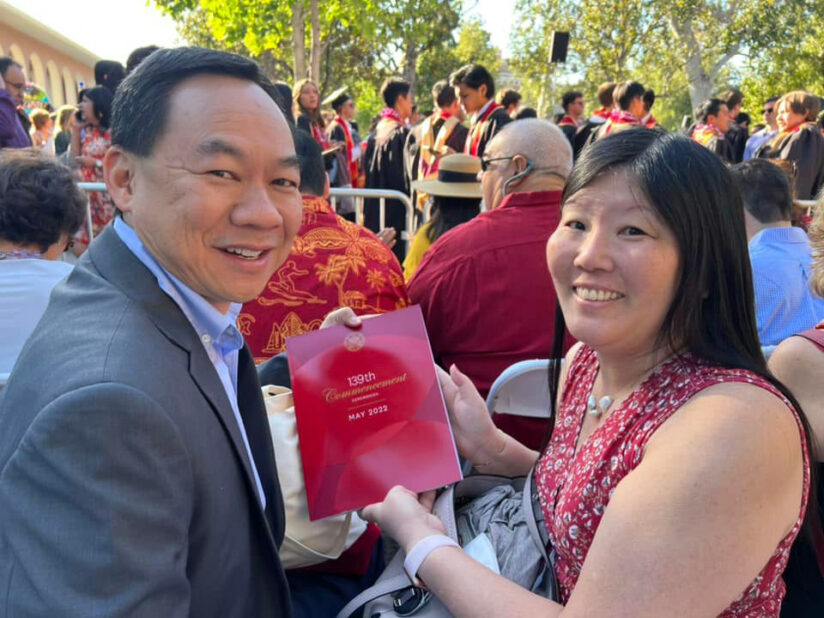 “I’m excited to be here because I didn’t attend my commencement,” said Alva Lai, who earned a bachelor’s degree in biology in 1992. “I graduated in December, so I didn’t come back.”

The parents said their son had decided on USC “when he was in preschool.”

“We were elated and relieved when he was accepted,” said Jonathan Lai, who graduated with Juris Doctor and Master of Business Administration degrees in 1985. “There were some challenges with COVID-19 because he had to study from home for about a year and a half, but everyone made the adjustments.”

After Friday morning’s main ceremony, USC Dornsife College of Letters, Arts and Sciences graduate Lillie Rupp cheerfully posed for photos with her proud parents. Her father Tim Rupp is a 1997 graduate of USC Gould School of Law; her mother Laura Rupp graduated with a business degree in 1988.

Tim Rupp described commencement as “a wonderful day,” adding, “To be a full-on Trojan family is fantastic.” 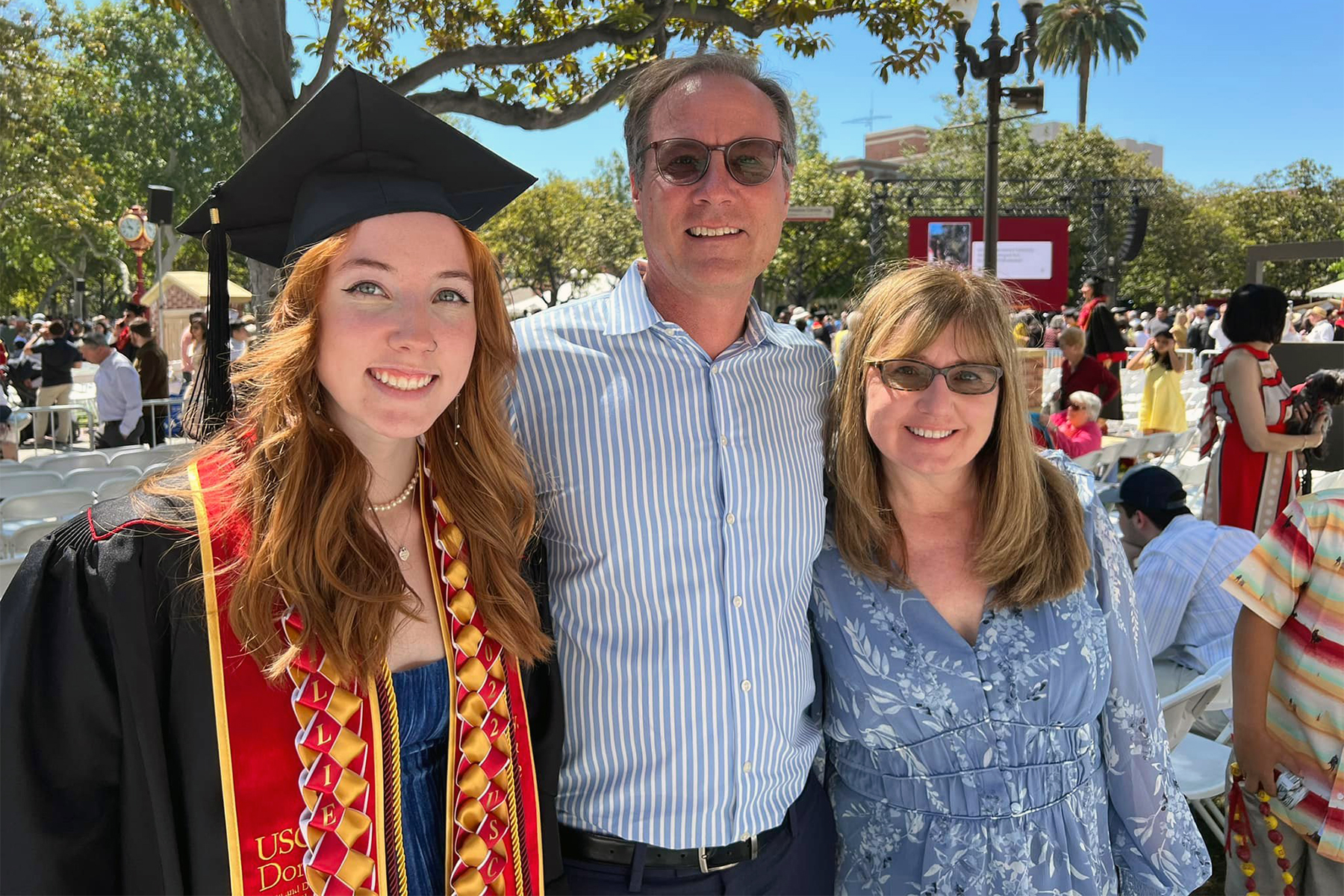 Lillie, Tim and Laura Rupp, from left, pause for a photo amid the festivities. (USC Photo/Greg Hernandez)