A mission to Mars is just one of the many out-of-this-world pit stops for USC Roski School of Art and Design alum Richelle Gribble.

“I am an expeditionary artist, and my art is my passport,” she said. “I travel to far-reaching and unassuming places to reflect where humanity, technology and the environment collide.”

Gribble was one of a select group of people chosen to experience the Hawaii Space Exploration Analog and Simulation, or HI-SEAS. It’s an analog habitat for human spaceflight to Mars that is located in an isolated area near the Mauna Loa volcano on the island of Hawaii. The area has Mars-like features and resides at an elevation of approximately 8,200 feet above sea level. 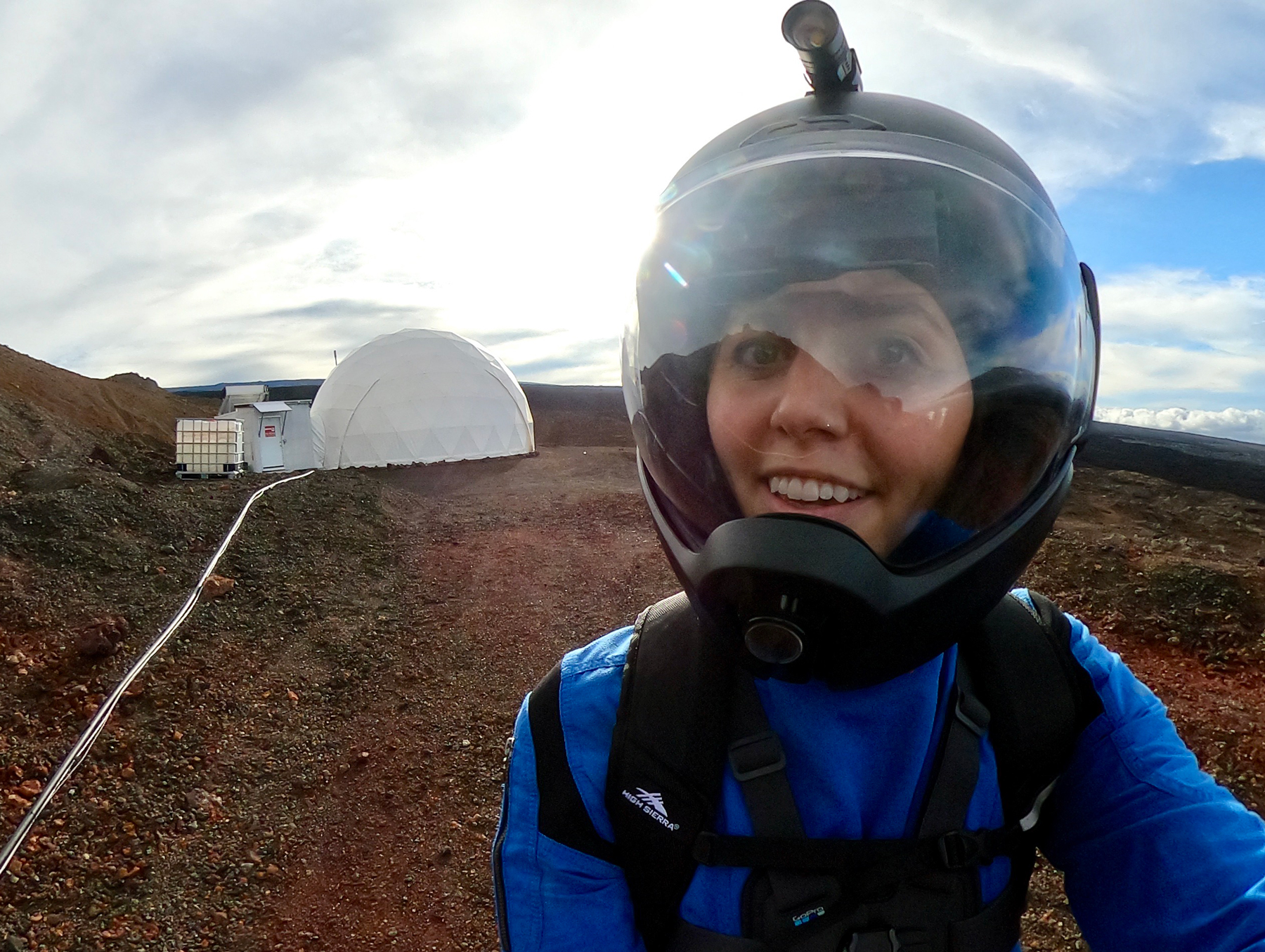 “As soon as the crew arrives at the habitat and the airlock door is shut behind us, the Mars analog simulation begins,” Gribble said. “I was the vice commander and creative research specialist on a crew with five other women.”

The first HI-SEAS study was in 2013, and NASA’s Human Research Program continues to fund and sponsor follow-up studies. The missions are of extended duration from four months to a year and replicate isolated and confined environments, such as Mars500, Concordia and the International Space Station.

The purpose of the missions is to determine what’s required to keep a spaceflight crew physically and mentally sound while on extended missions. The simulated Mars missions conduct research into food, crew dynamics, performance and other aspects of space flight. In addition, the HI-SEAS researchers carry out studies through a variety of daily activities.

Gribble’s work, a convergence of art and science, is the type of solutions-based endeavor USC Roski School Dean Haven Lin-Kirk sees as a result of artists’ unique insight.

“Artists tend to have a great deal of empathy and understanding of the human spirit,” she said. “I am immensely proud of how far our former artists and designers have gone and to see the tremendous impact they provide to society — on Earth and perhaps beyond.”

The HI-SEAS analog habitat location is surrounded by red, rocky terrain — much like the iron oxide dust and regolith of Mars  — as well as a network of caves where the crew can carry out research during their simulated spacewalks, as seen in a video diary by Gribble and her all-female crew.

“Our days are quite busy with packed schedules and a lot to be done in a short amount of time, mimicking the experience of astronauts in the International Space Station,” Gribble said. “We wear a full body spacesuit with a built-in communication system and oxygen machine. We cook with all dehydrated ingredients and track our food and water supply to correlate with the mission’s duration. We undergo daily exercise, sleep in small enclosures, have access to a science research laboratory, grow plants under grow lights, track daily medical reports and pursue both individual and team research and projects.”

In addition, the HI-SEAS study by NASA is trying to understand crew dynamics such as morale, stress management and problem-solving. While working together as a group, each crew member is assigned a specific task to aid in the overall success of the mission.

“Together, we delegate tasks to maintain the health and well-being of each other as well as oversee the systems and operations of the habitat,” Gribble said. “We each have daily activities and reports that are submitted each night, complete with a 20-minute communications delay, like Mars to our Mission Control.”

Gribble said she wanted to join the HI-SEAS simulated mission to Mars as part of a multiyear voyage to broaden her artistic perspective by witnessing different places firsthand.

“It led me to make art in unassuming yet far-reaching places,” Gribble said. “I’ve traveled atop glaciers near the North Pole, in a traditional Japanese paper mill in rural Japan, underwater and within the Amazon jungle, in the Biosphere 2 in Arizona and inside a habitat on an analog Mars mission with NASA.”

Gribble is currently developing an entire collection of art inspired by her journey to Mars. Works of art that stemmed from the HI-SEAS Mars simulation include the following:

“Cave Paintings of the 21st Century”

“To Space, From Earth”: A space art DNA time capsule

Crew members selected to take part in the HI-SEAS study are chosen based on the research projects proposed as well as the position for habitat operations and systems.

“I encourage people from all backgrounds and disciplines to attend a space analog mission, especially as we extend our reach through commercial space travel,” Gribble said. “My hope is that analog missions can help accelerate our understanding of our social and environmental responsibilities on Earth and in the greater cosmos.”

For this USC Roski alum, a backyard is as good as an art gallery

With the design school’s galleries closed due to COVID-19, artist Josh Beliso got creative and took advantage of his family’s outdoor space.

Artist Richelle Gribble is leading the collection of materials that could help future generations understand the impact of this global pandemic. The capsule will be sent to the moon by 2022.

How the Pandemic Changed Museums Forever (or Did It?)

They had to rethink how to connect with the public. Turns out “Botticelli on Zoom” and art talks from the couch might change the way Americans get their culture fix.

The move will bring the school’s three advanced degree programs together and provide additional state-of-the-art amenities for the artists, designers and scholars.