For the first time since the pandemic shuttered museums around the country, the USC Pacific Asia Museum is reopening its doors to the public.

To mark the historic occasion, the museum is hosting an “Opening and Closing Weekend” starting May 29. The unique event sends off an exhibit of work by women living and working in Los Angeles. It opened last year but could only be seen online. 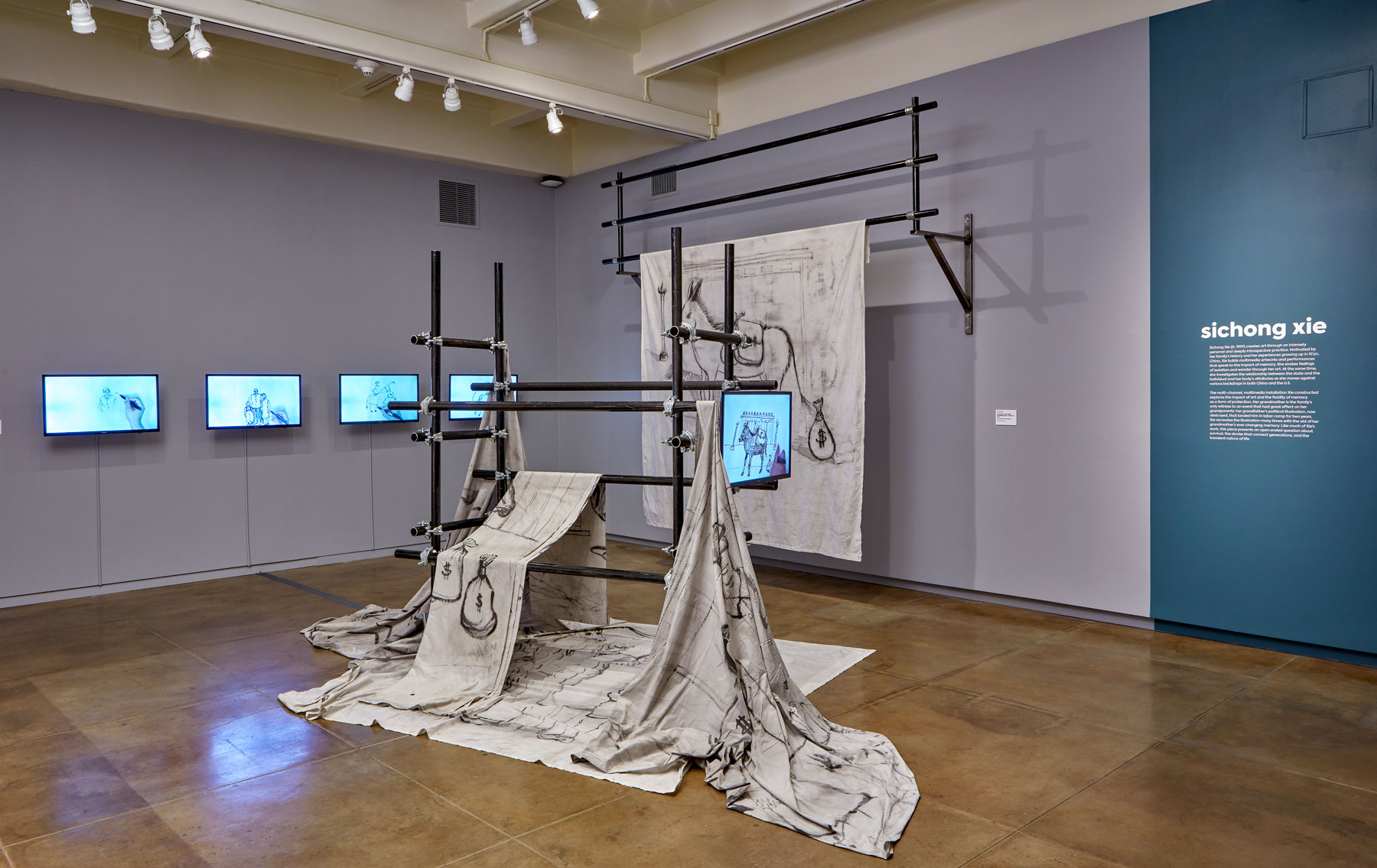 “Do Donkeys Know Politics: Scaffolding Series I” is a multichannel, multimedia installation created by artist Sichong Xie that explores the impact of art and the fluidity of memory as protection. (Photo/Peter Perigo)

“We had never done this before,” said Bethany Montagano, the museum’s director. “But we wanted to do right by these artists. Even though the show has had such an incredible following, we just thought it needed to be seen by an audience in person.”

Montagano views the museum as a place where art meets activism, and this particular exhibit speaks to issues that have come to the forefront over the last year, including civil unrest and hate crimes targeting Asian and Asian American communities.

“Right now, the pain is palpable in the community,” she said. “I think those who have had their sense of belonging degraded because of their race, sex and gender identity felt that pain.”

Welcome back to USC’s museums

The USC Pacific Asia Museum reopens on May 29. Reservations are required and available online. The museum is at 46 N. Los Robles Ave. in Pasadena; admission is free to USC faculty, staff and students with ID.

The USC Fisher Museum of Art, at 823 Exposition Blvd. on the University Park Campus, also has reopened. Admission is free; for more information, visit the museum’s website.

The exhibit, We Are Here, features work from seven Asian female artists. Their projects focus on identity, migration, refugees, race and gender.

Museum administrators acknowledged that many have called for the museum to better reflect the creators in its region. To more fully connect with Los Angeles and provide a much-needed platform, Montagano and Rebecca Hall, the museum’s curator, turned over control of the museum to the seven artists. What better way could there be to lift the community’s voices, they thought, than by lowering the museum’s own voice?

“It’s a huge amount of risk,” Montagano said. “I just hope that we’re leaders in the field by doing things this way. Curators and museums do not like to lower their voices and open themselves up to criticism. I think this is a grand gesture to be able to show that community that we are here for them and they can use our platform any way they want to.”

Phung Huynh, one of the featured artists, drew inspiration from her family’s history as refugees and the iconic pink boxes used by Southeast Asian immigrant doughnut shops in Los Angeles. 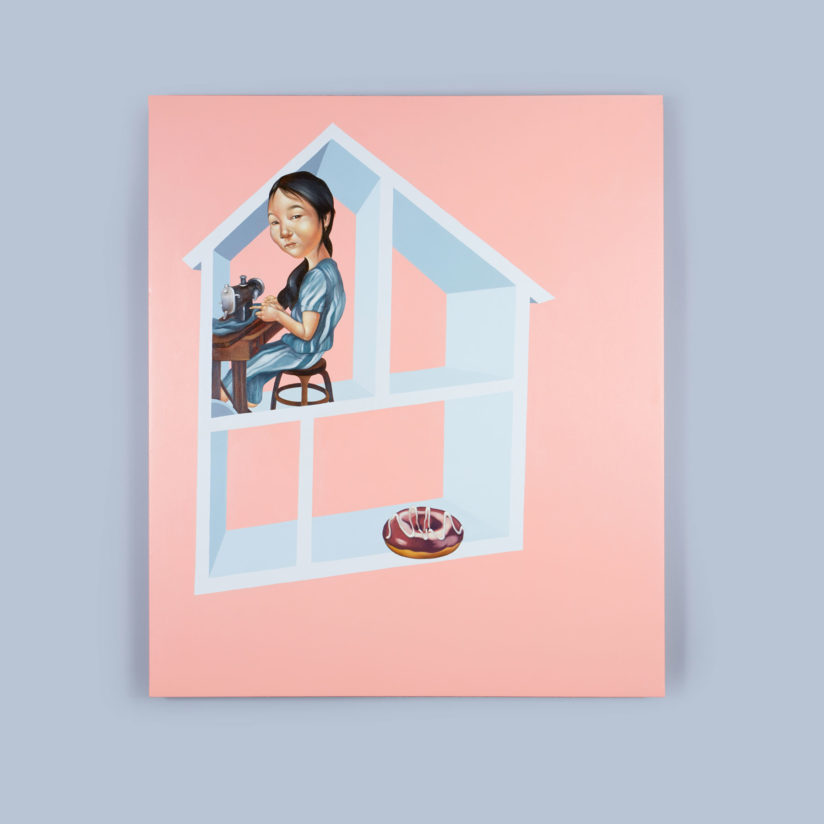 Huynh describes herself as a third-generation refugee. Her mother’s parents fled China during World War II, and her father fled from Cambodia to Vietnam during the 1975 genocide. Huynh’s parents met in a Thai refugee camp during the Vietnam War before eventually resettling in the United States.

Her exhibit is made up of a series of portraits of refugees painted on the pink boxes. A huge inspiration for this project was Huynh’s desire to respond to the way refugees have been treated over the last five years — specifically, limits on the number of refugees allowed in the U.S. and political rhetoric that positions refugees as scapegoats.

She wants her artwork to push the audience to see the faces of Los Angeles’ refugee community and how they’ve contributed to the area.

“I hope they go in with an open mind in considering what’s been happening for the last five years and to not be in denial,” she said. “The work may be difficult, but art is not about pleasing your heart and your soul all the time. Art is difficult and painful. Art is confronting pain and injustice. Art can heal. Art is agency for power and healing.”

Even though no visitors have seen the work in person, the exhibit has been open virtually throughout the pandemic. And Huynh’s images gained a strong following, so much so that she sold several pieces. Her work has also been included in the Billboard Creative project, a public initiative where art is shown on billboards scattered throughout L.A.

Although people have seen Huynh’s pieces virtually for more than a year now, she is excited that an audience will finally see them in person because seeing art through a screen doesn’t always do it justice.

“It never replaces real time and space,” she said. “I feel art needs to be experienced in real life. When you experience it virtually, you get a scrape of the top surface but you can’t fully engage with it.” 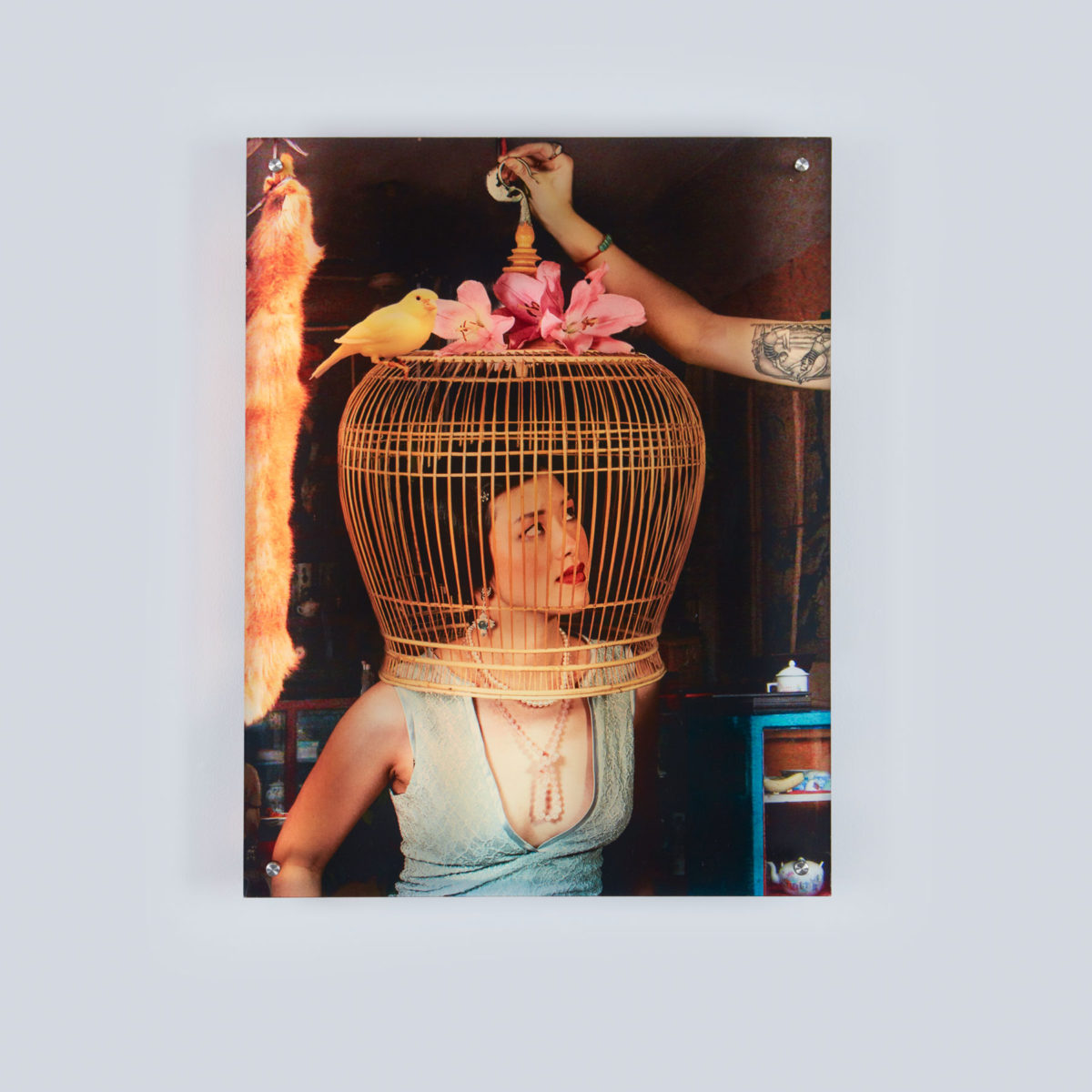 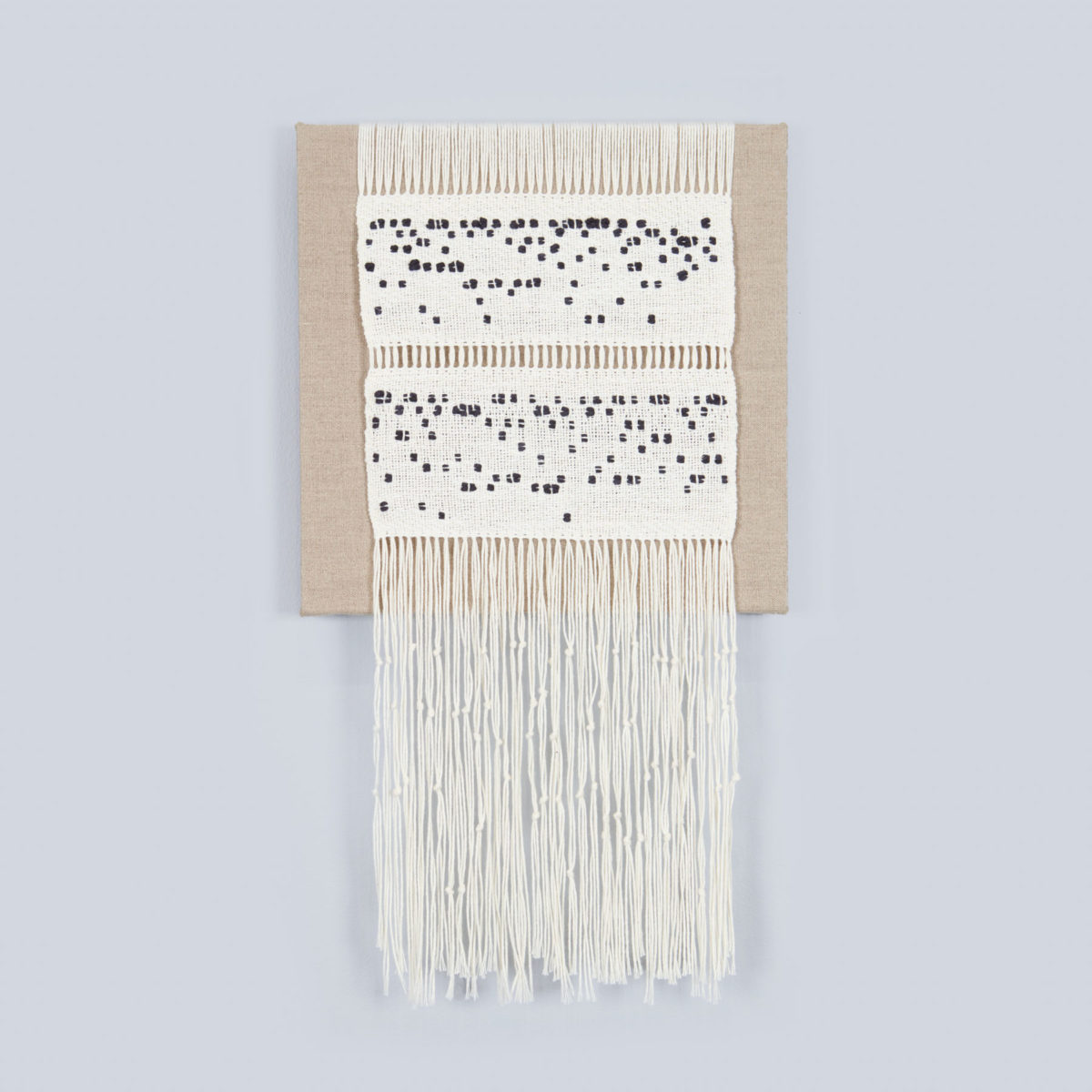 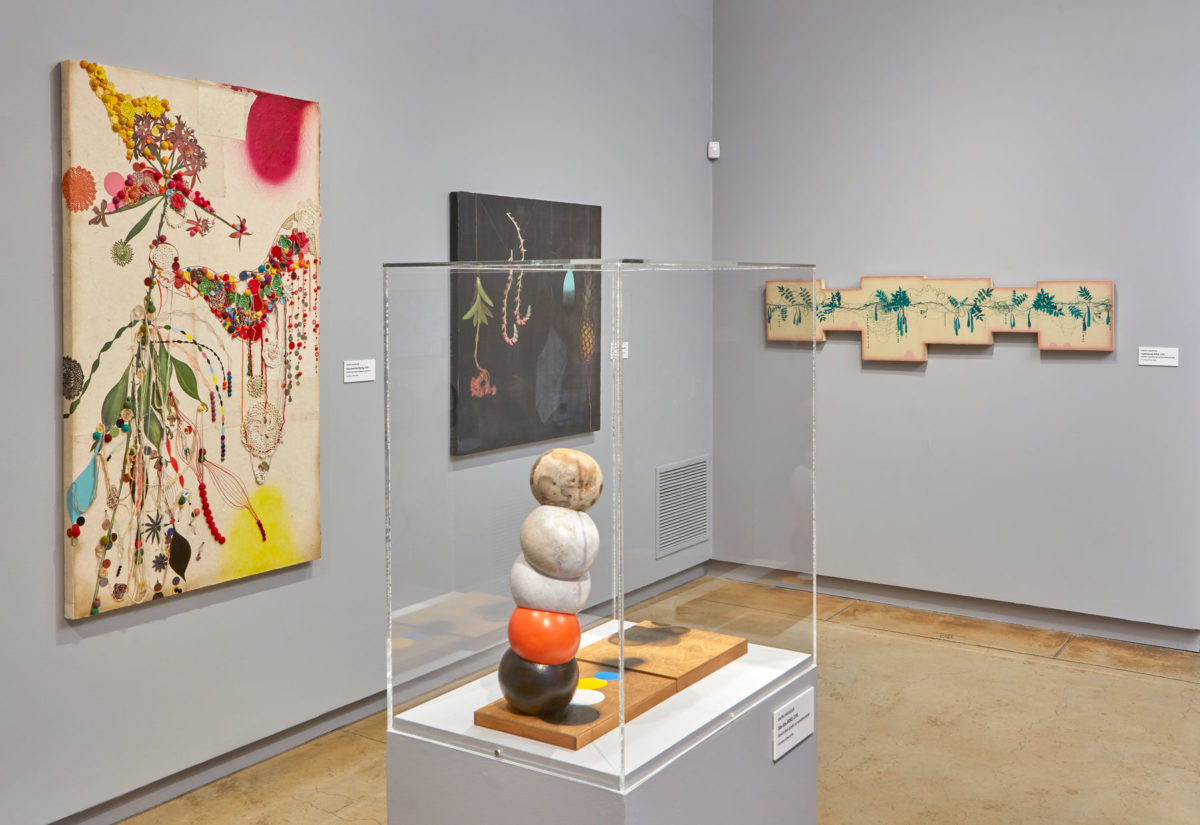 As the museum reopens and looks into the future, Montagano plans to build on lessons from the pandemic.

For starters, the museum tapped into a global audience it didn’t know it had. It’s a group of people starved for art who don’t have access to a museum in their own communities. As such, their virtual program will continue to be a staple of the museum.

In another major initiative, the museum will continue to give voice directly to the surrounding community. After a year of civil unrest, the museum sees it as its responsibility to uplift marginalized voices. Montagano plans to build off the spirit of We Are Here to give local artists an opportunity to showcase their work.

One immediate step is to have local artists paint a mural on the museum’s 100-foot-long north exterior wall. They are currently recruiting artists, and anyone interested should contact the museum. Artists will be free to express themselves in the space, she said.

Heading into summer, the museum already has the perfect exhibit for an in-person audience.

Oakland-based artist Nick Dong created a series of installations that are activated only when an audience interacts with the art.

Montagano described the exhibition, Divine Immersion, as taking the audience “through a spiritual journey built around kinetic art and sculpture” by blending modern technological techniques with Buddhist spiritually and meditative soundscapes.

For example, in a piece called “Heaven,” the audience sits in a space surrounded by mirrors. The audience sees reflections of themselves staring back, but as the mirrors spin, the reflections disappear.

Fittingly, the exhibit is about transience, Montagano said, reflecting that “nothing is permanent, things will change.”

Art and Cultural Treasures Abound at USC — and They’re Beckoning

With four museums and 11 galleries, USC offers an unexpectedly diverse look at the history—and future—of art in L.A.

The Pasadena museum turned its parking lot into a drive-thru donation center to protect Keck Medicine of USC health care staff on the pandemic’s front line.

A visionary and creative museum curator, Montagano comes from the Skirball Cultural Center in Los Angeles, where she served as senior curator.