A long-awaited, high-tech analysis of the upper body of famed fossil Little Foot opens a window to a pivotal period when human ancestors diverged from apes, new USC research shows. 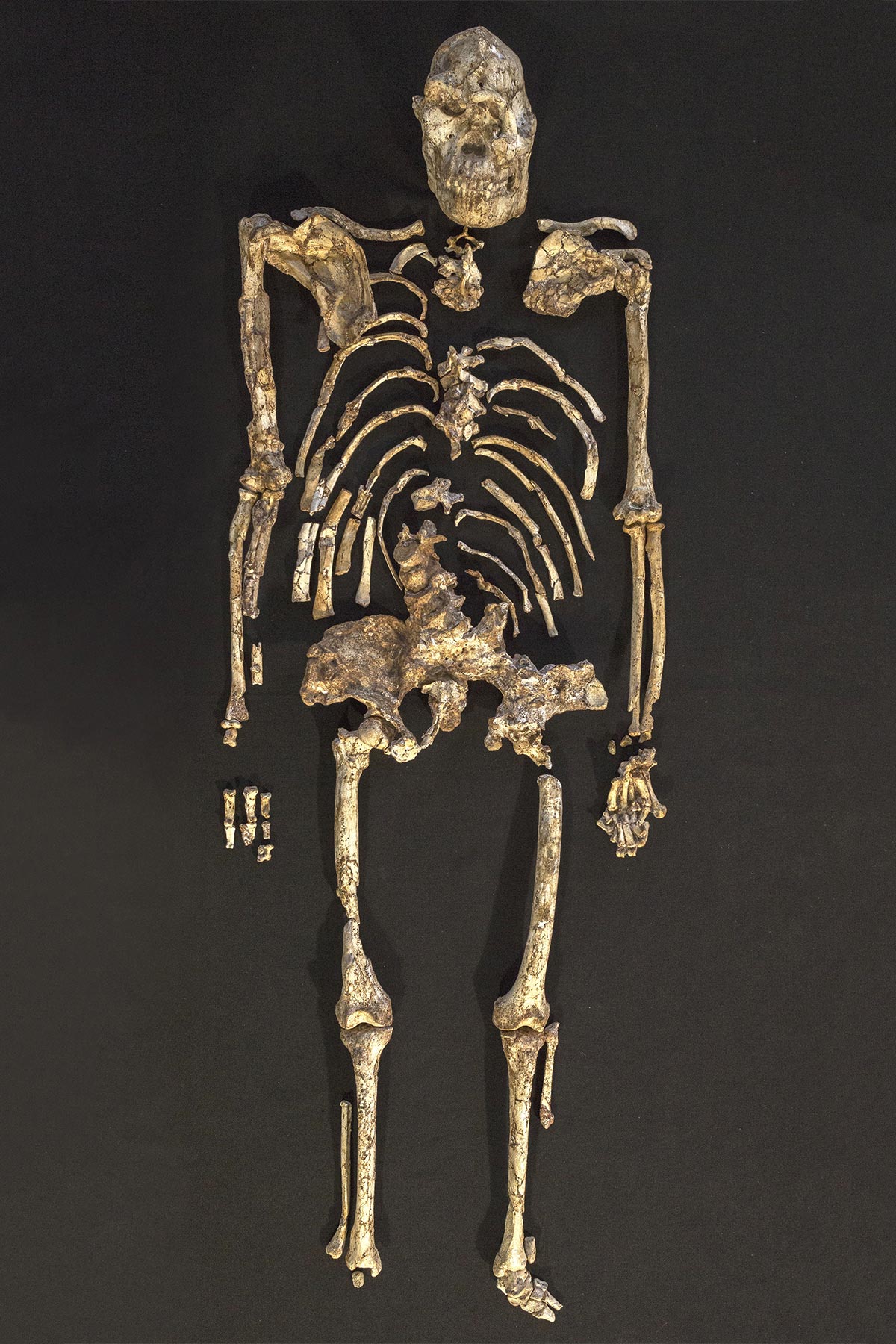 The Little Foot skeleton was discovered in the 1990s in a cave in South Africa and is the most intact ancient skeleton of any human ancestor. (Photo/Paul John Myburgh, Courtesy of the University of the Witwatersrand, Johannesburg, South Africa)

Little Foot’s shoulder assembly proved key to interpreting an early branch of the human evolutionary tree. Scientists at the Keck School of Medicine of USC focused on its so-called pectoral girdle, which includes collarbones, shoulder blades and joints.

Although other parts of Little Foot, especially its legs, show humanlike traits for upright walking, the shoulder components are clearly apelike, supporting arms surprisingly well suited for suspending from branches or shimmying up and down trees rather than throwing a projectile or dangling astride the torso like humans.

The Little Foot fossil provides the best evidence yet of how human ancestors used their arms more than 3 million years ago, said Kristian J. Carlson, lead author of the study and associate professor of clinical integrative anatomical sciences at the Keck School of Medicine.

“Little Foot is the Rosetta stone for early human ancestors,” he said. “When we compare the shoulder assembly with living humans and apes, it shows that Little Foot’s shoulder was probably a good model of the shoulder of the common ancestor of humans and other African apes like chimpanzees and gorillas.”

The apelike characteristics will likely attract considerable intrigue as science teams around the world have been examining different parts of the skeleton to find clues to human origins. The USC-led study, which also involved researchers at the University of Wisconsin, the University of Liverpool and the University of the Witwatersrand in South Africa, among others, was published today in the Journal of Human Evolution.

The journal devoted a special issue to Little Foot analyses from a global research group, which looked at other parts of the creature’s skeleton. The process is somewhat akin to the story of blind men and the elephant, each examining one part in coordination with others to explain the whole of something that’s not fully understood.

The Little Foot fossil is a rare specimen because it’s a near-complete skeleton of an Australopithecus individual much older than most other human ancestors. The creature, probably an old female, stood about 4 feet tall with long legs suitable for bipedal motion when it lived some 3.67 million years ago. Called “Little Foot” because the first bones recovered consisted of a few small foot bones, the remains were discovered in a cave in South Africa in the 1990s. Researchers have spent years excavating it from its rock encasement and subjecting it to high-tech analysis.

While not as widely known as the Lucy skeleton, another Australopithecus individual unearthed in East Africa in the 1970s, Carlson said Little Foot is older and more complete. The USC-led research team zeroed in on the shoulder assemblies because Little Foot provides the oldest and most intact example of this anatomy ever found. Those bones provide telltale clues of how an animal moves. In human evolution, he said, these parts had to change form before our ancestors could live life free of trees, walk the open savannah and use their arms for functions other than supporting the weight of the individual.

The scientists compared the creature’s shoulder parts to apes, hominins and humans. Little Foot was a creature adapted to living in trees because the pectoral girdle suggests a creature that climbed trees, hung below branches and used its hands overhead to support its weight.

For example, the scapula, or shoulder blade, has a big, high ridge to attach heavy muscles similar to gorillas and chimpanzees. The shoulder joint, where the humerus connects, sits at an oblique angle, useful for stabilizing the body and lessening tensile loads on shoulder ligaments when an ape hangs beneath branches. The shoulder also has a sturdy, apelike reinforcing structure, the ventral bar. And the collarbone has a distinctive S-shaped curve commonly found in apes.

Those conclusions mean that the structural similarities in the shoulder between humans and African apes are much more recent, and persisted much longer, than has been proposed, Carlson said.

“We see incontrovertible evidence in Little Foot that the arm of our ancestors at 3.67 million years ago was still being used to bear substantial weight during arboreal movements in trees for climbing or hanging beneath branches,” he said. “In fact, based on comparisons with living humans and apes, we propose that the shoulder morphology and function of Little Foot is a good model for that of the common ancestor of humans and chimpanzees 7 million to 8 million years ago.”

The scientists were able to achieve remarkably clear images of the fossils. That’s because the bones, painstakingly excavated for many years, are in good condition and uniquely complete. The scientists examined them using micro-CT scans, which can detect minute features on the surface of an object, peer deep inside a bone, measure the density of an object and generate a 3D model without harming the fossil.

USC professors in collaboration with the Natural History Museum of Los Angeles County host a formidable array of paleontologists, augmented by anatomical specialists at the Keck School of Medicine. The museum was not part of this study.

The study was supported by, among others, USC; PAST; DSI-NRF (South Africa); the University of the Witwatersrand; the U.S. National Science Foundation (BCS-0824552); The L.S.B. Leakey Foundation; The Wenner-Gren Foundation; The Campbell University Jerry M. Wallace School of Osteopathic Medicine; Standard Bank; and JP Morgan Chase.

The discovery by USC researchers helps date the more than 900-mile migration to about 34 million years ago.

Why you should care about this 130-million-year-old fossil

The ancient find, unearthed in Utah, bridges the transition from reptiles to the beginning of mammals and changes our view of continental drift, too.