At one of the entrances to USC’s University Park Campus, forklifts load pallets bearing a half-ton of electronics onto trucks emblazoned with the Human-I-T logo. Most of the gear — keyboards, monitors and printers — are but a few years old, time to leave the university but not ready for retirement.

The Human-I-T truck is a familiar sight around campus. For the past five years, USC has partnered with the nonprofit group to safely handle e-waste and refurbish devices, about 70% of which end up with families and individuals who need them. Most of the devices are three years old or newer. The partnership helps drive a program within the USC Leslie and William McMorrow Neighborhood Academic Initiative that provides devices, internet connections and computer instruction to the community. 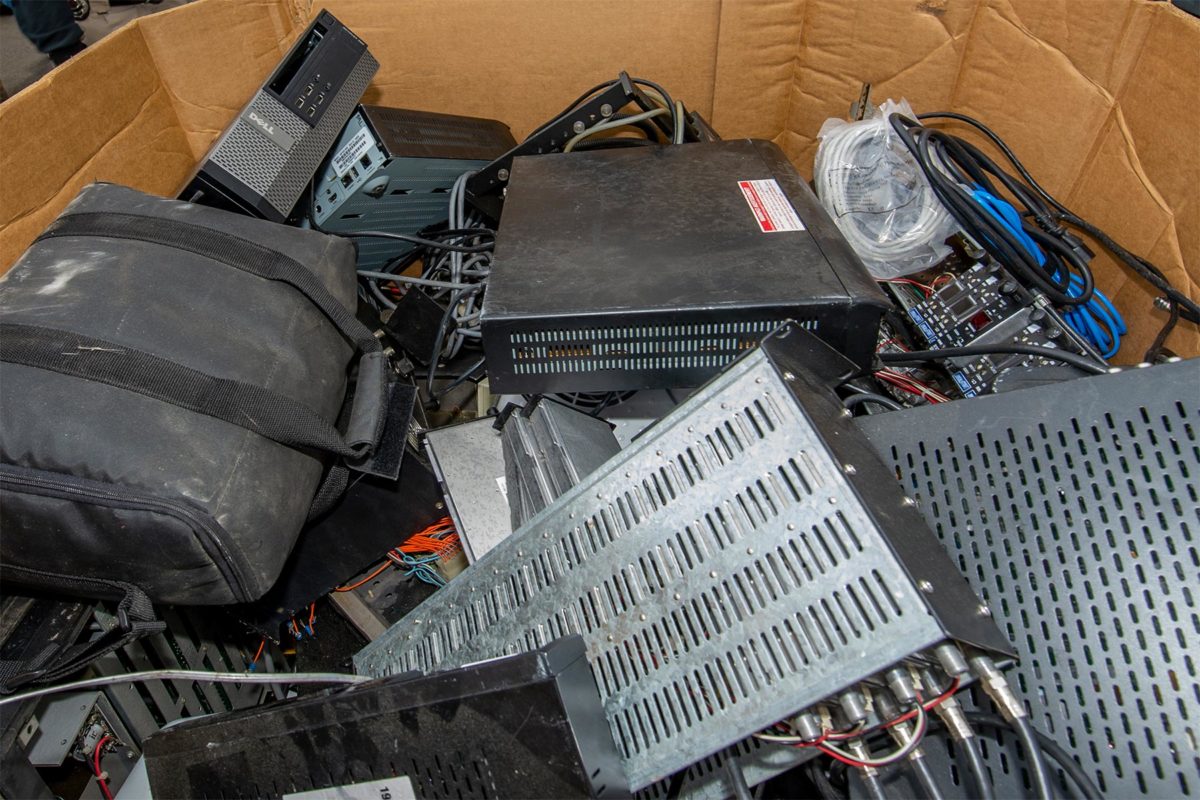 Most of the equipment is just a few years old and has plenty of life left. (USC Photo/Gus Ruelas)

“Typically, these would be shredded or taken apart to harvest the precious metals and resold,” said Anthony Rodriguez, hazardous materials manager with USC Environmental Health & Safety. “With Human-I-T, these electronics get a second life and a new purpose.”

The vast majority of USC’s used electronics go to Human-I-T, which charges the university nothing for the service. Devices that may contain highly secure information go through a different process, during which metals and plastics are extracted and put back on the market.

“We advocate repurposing over recycling, said Brandon Smith, Human-I-T’s vice president of business development. “There is so much opportunity behind a working device that can be given a second life.”

Reusing electronics at USC: better for the environment and the community

Making a new desktop computer and monitor requires considerable amounts of fossil fuel, chemicals and water. A refurbished device consumes fewer resources and keeps shredded metals and contaminants out of the air, soil and groundwater.

The seven-year partnership between USC and Human-I-T has kept 1 million pounds of used electronics out of the e-waste stream, the world’s fastest-growing waste stream and one of the most dangerous. Global e-waste increased 21% between 2014 and 2019, according to the United Nations, and is expected to grow by another 39% during the next decade.

USC’s donations ultimately feed into one large pipeline that provides digital access for people who need it.

“USC’s donations ultimately feed into one large pipeline that provides digital access for people who need it,” Smith said. “Some of the desktops, laptops and tablets are repurposed directly to end users while other item types can be resold to promote reuse. Proceeds go towards free or low-cost devices, subsidized internet connections, training programs and technical and hardware support services.”

When USC’s campuses closed due to the pandemic, the volume of donations fell 90% at a time when the need for electronic devices skyrocketed because of distance learning. But now, volume is picking up again as the university adapts to a new world of hybrid work and learning. A thousand printers from Keck Medicine of USC hospitals went to Human-I-T in February and about 70 devices were transferred from the USC Marshall School of Business in September 2020, which kept almost 5,000 pounds of e-waste out of the waste stream. Like other schools, USC Marshall replaces devices about every three to four years, resulting in a substantial flow to Human-I-T.

The university and Human-I-T began their relationship in 2013, when Patrick Cates, then-associate director of customer technology services for USC Marshall, formed a partnership with the nonprofit group’s founder, Gabe Middleton.

“He was on campus, saw me moving a trailer full of PCs between buildings and struck up a conversation,” Cates said. “And we took it from there.” 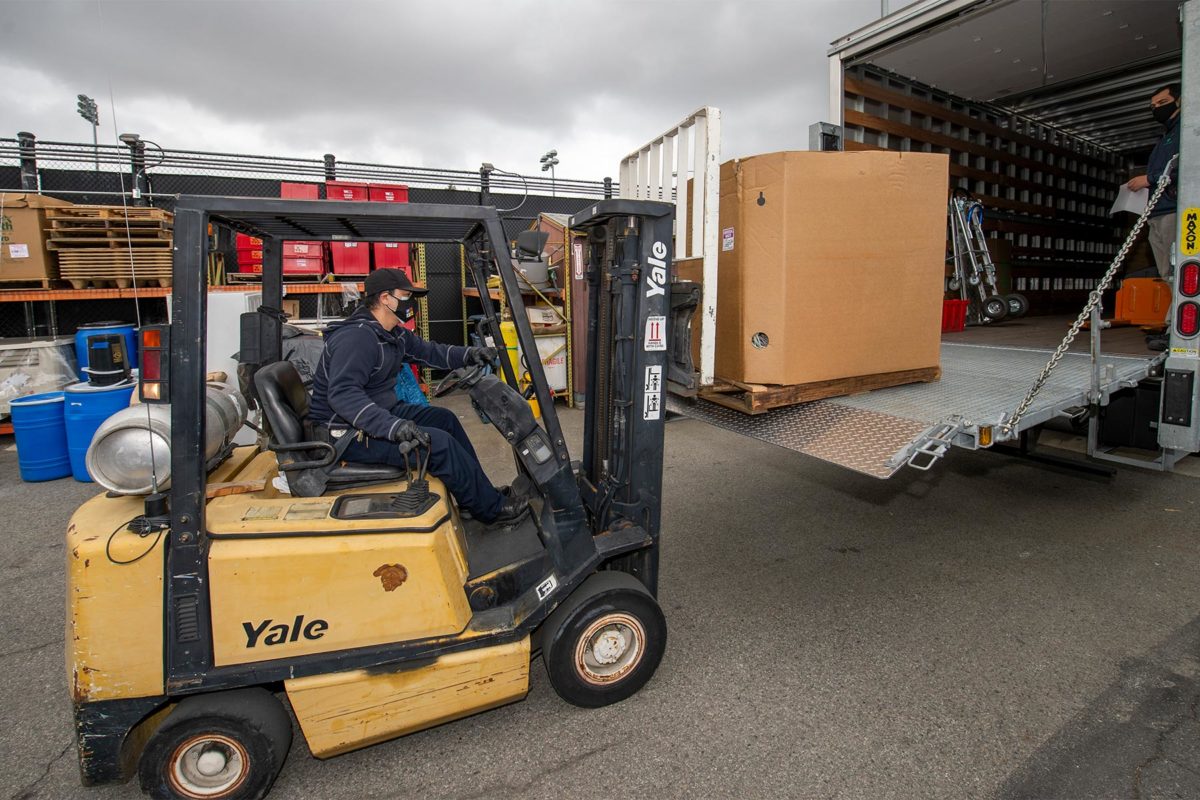 “It is just such an innovative ‘total solution approach’ that transforms two very difficult societal problems into self-funding solutions,” Shook said. “It’s a simply brilliant approach that should be copied and used as broadly as possible across society.”

Scott Smith, an IT consultant and engineer at USC Marshall, has watched Human-I-T grow into a more sophisticated operation over the years.

“When we started with them, they didn’t even have a truck,” he said. “Their president was going out and helping pick up devices.”

Smith proudly displays a plaque he received from Human-I-T in 2017, which has an inscription: “By working with Human-I-T, you’ve helped us connect over 5,000 underserved families and individuals to technology and the internet. You’ve given those devices a second life rather than being ground up and recycled.”

“The devices we’re handing over to Human-I-T are relatively new,” he said. “They’ve still got a lot of life in them.”

Ever wonder why USC doesn’t have solar panels on its buildings? Or whether the dining halls serve sustainable food? The university’s sustainability specialist takes on tough questions about going green at USC.