When the COVID-19 pandemic hit and classes migrated online, Christian Grose thought long and hard about how his fall class on fixing American democracy would continue to engage his politically savvy students. 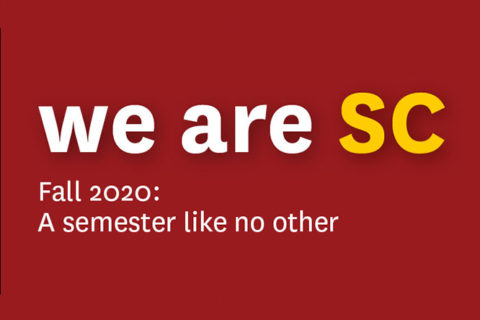 Then the light bulb went on for Grose, an associate professor of political science and public policy at the USC Dornsife College of Letters, Arts and Sciences and academic director of the USC Schwarzenegger Institute for State and Global Policy.

Grose regarded the move to online instruction during the pandemic as an opportunity to open his classroom of 70-plus students to experts from around the country. He invited democracy scholars and practitioners from universities and nonprofits, as well as elected officials — guests who ordinarily wouldn’t be able to fly into Los Angeles for the day, particularly during the critical final months before the 2020 presidential election.

He booked enough guests to have one attend the class, “Critical Issues in American Politics: Fixing American Democracy,” every week. They included academics like Howard University’s Keesha Middlemass, author of Convicted & Condemned: The Politics and Policies of Prisoner Reentry, who discussed restoring voting rights to formerly incarcerated people. The class also welcomed Michigan Secretary of State Jocelyn Benson, who explained redistricting commissions and vote-by-mail just weeks before a battle over the certification of ballots in her state dominated the headlines.

By the end of the semester, the USC students were true experts in how to fix American democracy.

The guests typically spoke for the first hour of class about political reforms to fix American democracy. Afterward, Grose taught about the intellectual and scholarly material on those topics.

But he also wasn’t afraid to shake up the newly established format. One class involved the virtual screening of the documentary UnRepresented, which explores how special interests bankroll political campaigns and lobby lawmakers to tip the scales in their favor. Grose moderated a panel and Q&A with the film’s director, Daniel Falconer, and other experts on the problem of money in politics.

“My goal in this class is to create the next generation’s new batch of scholars and leaders in the political reform and political science communities,” Grose said. “As the semester progressed, I witnessed firsthand the students’ knowledge levels deepen. By the end of the semester, the USC students were true experts in how to fix American democracy.”

USC class focuses on concepts that can help fix democracy, regardless of party

Grose is quick to point out that while his students have strong opinions, the material he teaches focuses on improving democracy for everyone, no matter their party preference.

For example, in Michigan, voters passed a constitutional amendment called “Voters Not Politicians” to establish an independent citizens’ commission that would redraw district boundaries for the state’s legislative and congressional seats every decade. The reform is designed to take the partisanship out of drawing those lines.

Many of Grose’s students have embraced the revamped class and the course materials that push them to consider the evolution of America’s greatest but messy experiment — democracy.

“The remote format of the course has not detracted from its value,” said USC sophomore and political science major Helen Rossi. “Professor Grose has an impressive ability to explain complex concepts through interactive lectures, discussions and guest speakers. His method of incorporating the concrete practice of our guest speakers to some of the more abstract theories and academic research learned during class has presented me with a well-rounded and dynamic perspective on American politics.”

Rossi said she was captivated by Benson’s descriptions of navigating the political sphere as a female secretary of state. She also was inspired by Middlemass, who explained how felon disenfranchisement and the broken criminal justice system are forms of oppression with effects that reverberate through communities of color.

The final class of the semester featured none other than the USC Schwarzenegger Institute’s namesake, former California Gov. Arnold Schwarzenegger. He appeared with two county officials who were among more than three dozen nationwide recipients of the institute’s inaugural democracy grants. The grants paid for election officials to open new early voting sites and polling places, provided hazard pay to poll workers and expanded access to thousands of voters in the weeks leading up to the Nov. 3 elections.

For a brief moment, the class had another unexpected guest. Schwarzenegger’s pet donkey Lulu “Zoombombed” the proceedings when she wandered into his kitchen, providing comic relief from the serious talk.

You have such interesting classes. I love it.

“My favorite guest lecturer was definitely Gov. Schwarzenegger discussing his democracy grant fund as a means of increasing voter access,” said Nicole Nwankwo, who is a double major in political science and health and human sciences. “Voter suppression is such an important issue, so to hear his passion and concern with polling place accessibility was extremely reassuring.

“Even though I’m sure we all would prefer to be attending class in person, taking this class allowed students to be able to interact with various speakers who otherwise may not have been able to come to our class in person, with many of these political figures having busier schedules,” she continued. “Overall, this was by far my favorite class this semester, and I’d recommend it to anybody.”

“It’s truly been my favorite political science class of my time at USC,” agreed Finley Davis, a junior studying political science and Spanish. “I really appreciate the extra benefit of online classes, as I’m able to hear from so many speakers, especially in the weeks leading up to the election.

“I also enjoy that many of the speakers are the authors of our assigned research readings,” she added. “It really provides an intimate look into the research process and even made me more interested in pursuing a political science career instead of a legal one.”

Another strong endorsement came from the “Governator” himself. “You have such interesting classes,” Schwarzenegger told Grose. “I love it. It really gives students an idea of where they can participate when they finish with their studies and how they can participate in making a better country and a better system.”

More stories about: Online Education, Politics, We are SC

Data scientists try to explain the U.S. government’s shifting ideologies over the past four decades.

California voters want a ‘fresh and new voice’ in the U.S. Senate

With Kamala Harris poised to become vice president, almost half of California voters want someone with no experience in Washington or Sacramento to fill the Senate vacancy, the USC Schwarzenegger Institute’s latest poll finds.

A USC study found that changes to U.S. electoral institutions may be the best way to lessen legislative gridlock and partisan politics in Congress.

How can we fix democracy? USC students embrace expert advice from around the country