Two massive walls of water surfed by two women within two hours — but which wave was bigger?

Mere hours apart, France’s Justine Dupont and Brazil’s Maya Gabeira had rocketed down two nearly identical behemoth waves off the coast of Portugal. At stake: $15,000 in prize money for winning the 2020 Women’s XXL Biggest Wave Award. World Surf League leaders judging the competition stared at the video footage to see who rode the tallest curl, but they couldn’t agree on the winner. 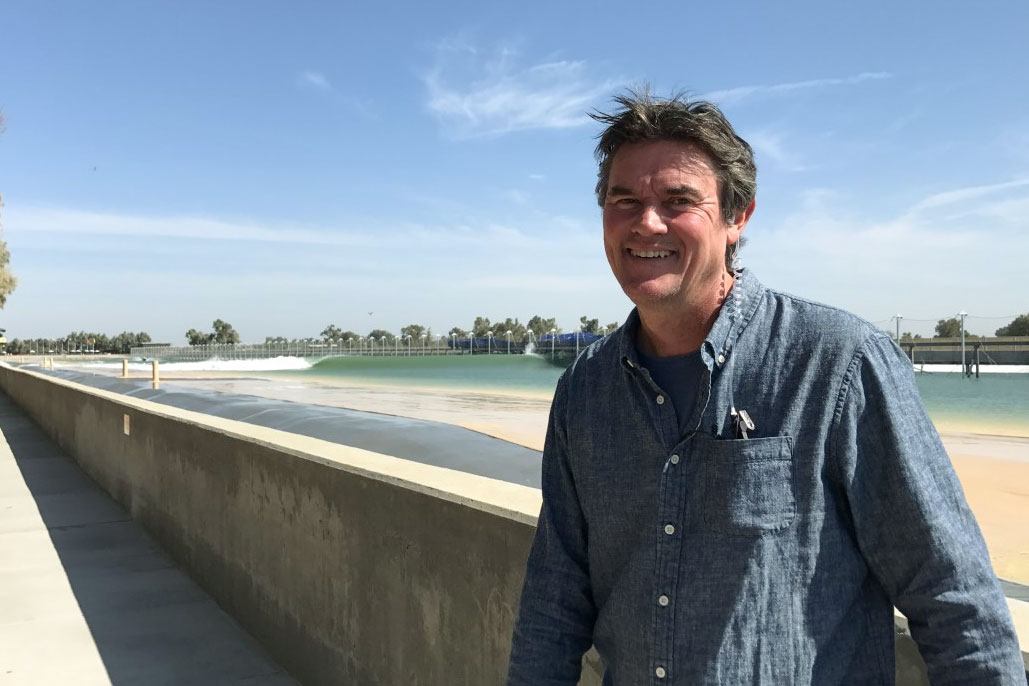 Adam Fincham relied on his background in fluid dynamics to help determine the winner of a surf showdown. (Photo/Courtesy of Adam Fincham)

They realized they’d have to call in an expert. Who else but Adam Fincham?

Like an investigator solving a mystery, Fincham led a team of scientists and big-wave experts who pored over photographs and videos from the two rides to come up with an answer. He has the background to do it. As an adjunct research associate professor of aerospace and mechanical engineering at the USC Viterbi School of Engineering, he designed a machine that creates what many believe is the perfect artificial wave.

He also understands that some of the greatest triumphs happen when people pit their courage and strength against the powerful forces of nature. In the quest to jump farther, soar higher and test endurance, measuring achievement is a must.

“There will always be purists who think it doesn’t matter,” Fincham said. “But it does matter, especially to these athletes who risk their lives in these big waves. These athletes are risking their lives in a serious manner, so we owe it to them to put this effort into judging the feat they just accomplished.”

The stakes today go beyond bragging rights. Along with global recognition for riding the biggest wave of the year and the cash prize comes a flurry of potentially lucrative sponsorships. When Fincham and his team crunched the numbers, the data told a clear story: One wave bested the other by about 3 feet.

“It might not be much, but we had multiple data points — including four different angles of these waves — and they consistently showed one wave was bigger,” he said.

Surf’s up, but exactly how far up? A USC researcher breaks down the biggest waves

In years past, judging winners of the World Surf League’s big-wave contest seemed simple. The league convened a panel of surfers and industry experts to examine videos and photos and reach a decision. They might use some rough measurements based on the height of the surfers or the length of their boards, but that’s about as scientific as they got.

Maya Gabeira breaking her own record at Nazaré, which was previously 68 feet. (Video/Pedro Miranda)

This year, however, little separated the two candidates for largest wave of the year. What’s more, both waves appeared to be larger than the previous women’s record, a 68-foot bomb that Gabeira surfed in 2018 at the same beach in Portugal.

“They came to me and said, ‘Could you help us out with this dilemma?’” Fincham said. “I have a background in image processing and spent much of my life on imaging methods and fluid dynamics. I said, ‘Sure, it’s not extremely difficult to be a bit more precise.’”

To avoid any bias, Fincham assembled a team of experts, including collaborators from the World Surf League and Scripps Institution of Oceanography at the University of California, San Diego. All agreed that the method they devised was the best scientific approach to estimating wave height based on the footage they received.

Using videos and photographs taken from the cliffs above the famed surf break known as Nazaré and from the water, they devised formulas to account for the angle of the photographs, camera lens distortion and many other variables. They plugged numbers related to each ride into their formulas to see whose wave crested higher.

Then they turned to the world record. Based on the length of the jet skis used to tow the surfers into the towering waves, among other factors, the team estimated the height of each breaker.

The results: Gabeira had bested her previous record by 5.5 feet, slicing down the face of a wave that crested at 73.5 feet. Dupont’s wave, although impressive, proved to be slightly shorter at 70 to 71 feet. In addition to securing the women’s title, Gabeira can boast about surfing the biggest wave all year — the men’s big-wave winner, Kai Lenny, rode a frothing wall of water that peaked at 70 feet.

For Fincham, who earned his doctorate in aerospace engineering from USC in 1994, the project offered a fun way to employ his extensive knowledge of fluid dynamics. And it’s not his only foray into the surf world: His work on the perfect man-made wave involved a collaboration with famed surfer Kelly Slater.

As athletes spin faster and flip higher — and technology helps them along — it makes sense that engineers become a bigger part of the sports scene. The work with the World Surf League, Fincham said, represents the kind of collaboration engineers are seeing in many different sports with new technology: “It’s great for the competitors. If their fate of having a world record was determined by a panel that was not really qualified to make the decision or couldn’t come to a conclusion, it wouldn’t be fair. There is now a method to the madness.”

He is already considering ways to improve the precision of determining the big-wave winner each year. He envisions deploying special cameras or a technique called lidar that uses lasers to measure distances and then builds a 3D replica of the object being surveyed.

“We could have much more accurate data and tell you with almost perfect certainty how big a wave was,” he said. “This is looking very good going forward.”

His passion is personal as much as professional: Surfing has a special place in Fincham’s heart. The Jamaica native and self-described amateur surfer started carving up the waters of Southern California decades ago. But when asked whether he’d ever consider paddling out into the ocean at a place like Nazaré, where an underwater canyon produces the surf spot’s terrifyingly tall waves, he laughed.

“No, no, no — I would go nowhere near that,” Fincham said. “But because I know these jet ski drivers and I trust them, if one gave me the opportunity to ride on the back of the ski as they drove into one of these waves, I’d go with them. That would still be very scary.”

In motion with the ocean

You’ve seen them along Southern Californian coastlines. They can be described as an occurrence that provides surfers with an opportunity to become “one with nature.”

In 1969, an El Nino storm pounded the coast of California, producing epic waves and a legendary winter of surf. USC Dornsife experts weigh in on the past — and future — of surfing in the Golden State.

The feat of standing up on  a board and riding a wave may empower people struggling to overcome PTSD and other challenges.