Garrett Wagner can still describe the pain he felt six years ago when a sudden injury sent him toward where he is today. During a 2015 weapons retention drill — a physical conflict simulation exercise — at a base in Bahrain, the Navy master-at-arms went down hard.

“The guy I was going up against was in a big padded suit,” he remembers. “He was a really big guy anyway. He went for the gun, I spun the elbow, he picked me up by the waist. As we were falling, I felt my knee dislocate. They rushed me to the hospital. They went in with a little camera and told me, ‘Your anterior cruciate ligament is completely torn.’”

Just 21 at the time, Wagner had never suffered a serious injury.

“I’d heard horror stories, but the surgeon — a captain who’d been performing surgeries for 26 years — instilled a lot of confidence in me, told me not to worry. Nine months later, after surgery and physical therapy, I was cleared to start exercising. The surgeon who fixed me up did such a stellar job, I wanted to do that for other people.”

A little tough love from a Trojan dad

Wagner is a dual citizen of Panama and the United States. He was born at Gorgas Army Hospital in Panama City in 1994. 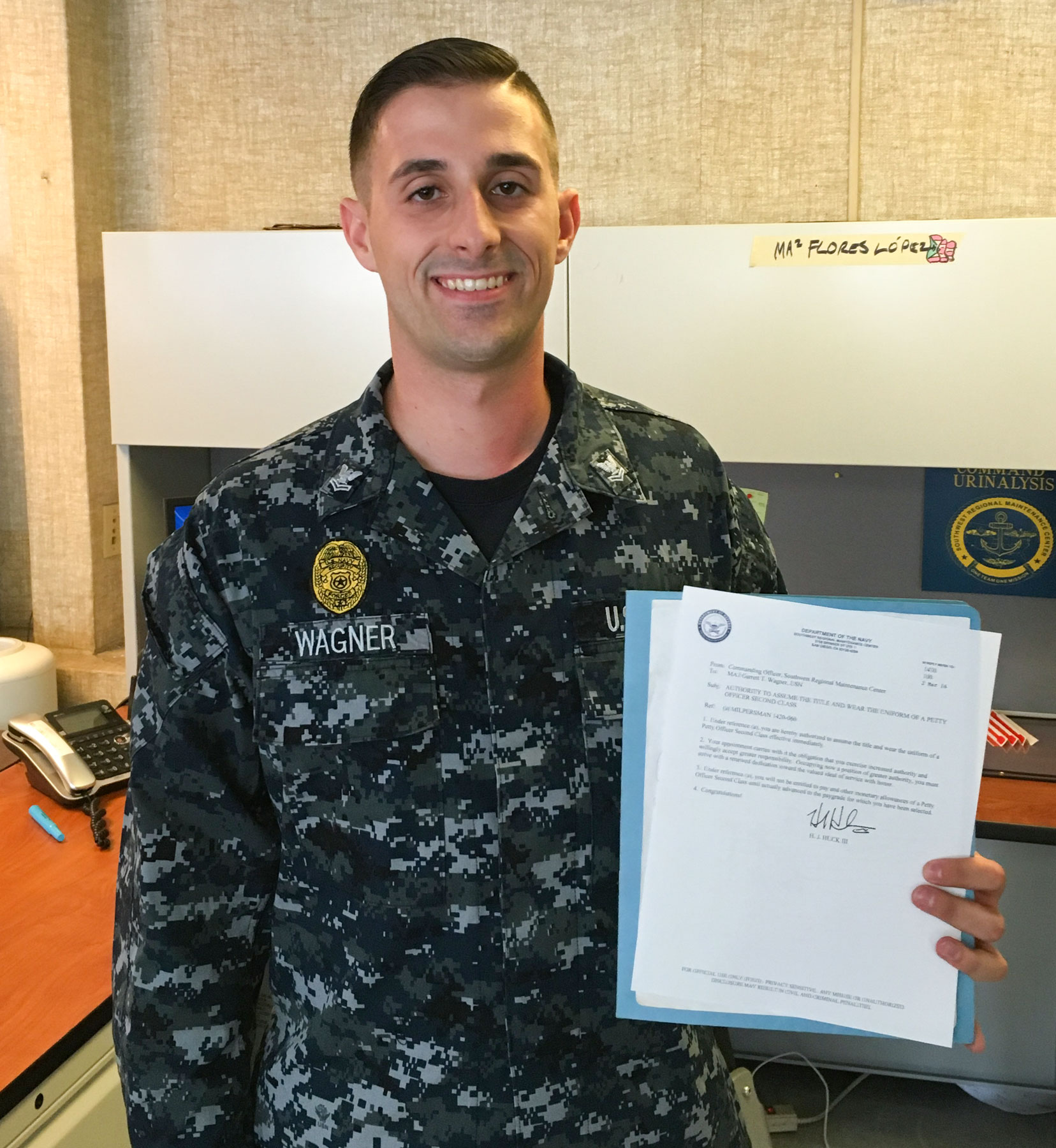 “That’s what happens when your dad works for the Navy,” said Garrett’s father, John Wagner, a retired NCIS agent who graduated from USC in 1988. “We lived all over the world, then settled back in San Diego. I was able to take Garrett to a few games and introduce him to the Trojan Family, so it became his dream just like it was mine.”

After high school, Garrett wasn’t sure what direction to take. His dad gave him a gentle push.

“I told him: ‘You gotta do something, not just play video games,” John Wagner said. “Get a job, find your education or join the military. He took the third option.”

John Wagner said his son was a good writer but not an advanced student when it came to math and science.

“He’s a biochemistry major — an accidental arrival at his destination,” John Wagner said. “He’s thrown himself into it. The kid who was scared of math and science is now running toward it.”

From the O.C. to USC and beyond

After healing, Wagner started studying at Saddleback College. He volunteered at Hoag Hospital in Newport Beach and took guidance from a faculty member who — like Wagner’s father — is a USC alum.

This fall, Wagner joined about 1,500 other transfer students at USC. Like Wagner, half transferred from California community colleges.

You’re in the eye of the storm, and that’s where I want to be.

“The veterans’ community at Saddleback is strong,” he said. “The transition felt right, and I joined the Veterans Association here at USC right off the bat.”

Now aiming for medical school while he earns his biochemistry degree, Wagner’s path is not an easy one.

“I’m not naturally a math or science person, and I had to start at the bottom. I love the material, so that keeps me going,” the Navy veteran said.

The experience that led Wagner to USC will eventually take him to the emergency room.

“I’m looking at becoming an ER doc,” he said. “In the ER, just about anything can go wrong, and I saw that when I was volunteering at the hospital. Gunshot wounds, knife wounds, poison, cardiac arrest — you never know what’s coming through the door. You’re in the eye of the storm, and that’s where I want to be.”

After spending four years keeping some of the world’s biggest planes in the air, first-generation transfer student Matt Mena is climbing toward a computer science degree.

After celebrating academic successes with her daughter during the pandemic, Melissa Hooper is now working her way through USC Marshall’s Master of Business for Veterans program.

As USC celebrates Military Appreciation Week, veteran Kevin Moran explains how he wants to use his engineering skills to make the world a better place.

USC veterans find a place of their own to call home

All branches of the military are represented at the university’s first units for student veterans.