Gallagher was presented with the university’s top honor, the Presidential Medallion, awarded to those who have brought honor and distinction to the institution. 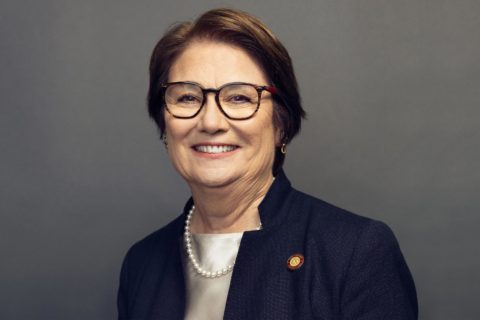 Gallagher served as dean of the USC Rossier School of Education for two decades starting in 2000. Under her leadership, the school attained and sustained its position among the top 15 graduate schools of education in the country, according to U.S. News & World Report’s national rankings.

After deciding not to seek a fifth term as dean, in July she returned to the school’s research faculty. She specializes in issues of equity related to women in leadership and holds the Veronica and David Hagen Chair in Women’s Leadership.

“Karen has changed the way we think about education and empowered so many in our community,” USC President Carol L. Folt said. “And she’s inspired everyone around her by putting USC’s mission into practice, day after day.”

Also honored at the online event were:

Distinguished Professors: Awarded very selectively to those whose accomplishments have brought special renown to USC.

University Professors: Awarded based on multidisciplinary interests and significant accomplishments in several disciplines.

Creativity in Research and Scholarship

Class of 2020 valedictorian and salutatorians: At USC, it is the custom to name one student to serve as the university valedictorian and one or more students to serve as university salutatorian. The USC selection process recognizes the very highest levels of academic achievement, but it is also more holistic and takes into consideration service and leadership as well.

University Trustees Award: Awarded to the graduating students who have attained the highest scholarship average of all undergraduate men at the university.

Emma Josephine Bradley Bovard Award: Awarded to the graduating students who have attained the highest scholarship average of all undergraduate women at the university.

USC Provost’s Award: Awarded to the graduating students who have attained the highest scholarship average of all undergraduate transfer students at the university.

Rockwell Dennis Hunt Award: Awarded to an alumna or alumnus of USC who is pursuing a graduate or professional degree at the university and who is most representative of the Trojan Family’s traditions and values.

University Outstanding Teaching Assistant Award: Awarded to three graduate teaching assistants – from diverse areas such as the natural sciences and engineering, the social sciences, and the humanities and arts – who have exhibited consistent excellence in the classroom and thus symbolize the university’s dedication to the education of scholar-teachers.

Harry S. Truman Scholarship: Awarded to juniors who have outstanding leadership potential, plan to pursue careers in public service and wish to attend graduate school in the U.S. or abroad to prepare for their careers.

Schwarzman Scholarship: Designed to prepare young leaders to serve as a bridge between China and the rest of the world.

Mellon/American Council of Learned Societies Fellowship: Offers promising graduate students a year of funding so that they can focus their attention on completing projects that form the foundations of their scholarly careers.