Bots and conspiracy theorists have infested the Twitter chatter around the upcoming U.S. presidential election, USC researchers have found.

Looking at more than 240 million election-related tweets, the study found that thousands of automated accounts, known as bots, had posted tweets about President Donald Trump, his Democratic opponent former Vice President Joe Biden and both of their campaigns.

Most of these bots were promoting right-leaning political conspiracies like QAnon. Even though the bots are believed to have been responsible for a few million of the tweets, they likely reached hundreds of thousands of Twitter users.

The USC study was published Wednesday by the journal First Monday, just days before the Nov. 3 election. The research focused on election-related tweets from June 20 to Sept. 9, 2020, and other data from Twitter during that period. The USC researchers wrote that their analysis was an attempt to chart the landscape of social media manipulation in the 2020 election.

The state of social media manipulation during the 2020 election is no better than it was in 2016.

“I think the most important finding here is that bots exacerbate the consumption of content within the same political chamber, so it increases the effect of echo chambers or the salience of those tweets,” said the study’s lead author Emilio Ferrara, associate professor of computer science at the USC Viterbi School of Engineering and associate professor of communication at the USC Annenberg School for Communication and Journalism. He also is a research team leader at the USC Information Sciences Institute.

Bots almost exclusively retweeted original posts by Twitter users who are human, the scientists noted. In turn, many humans retweeted the bots’ messages that aligned with their political leanings, which then led to additional retweets and replies.

The bots were identified by Botometer, a machine learning-based tool developed by USC and Indiana University scientists to identify likely bots based on their tweeting behavior and several other characteristics.

Throughout their analysis, the research team identified significant differences between bots and humans and the type of election content they tweet and retweet on the social media platform.

In addition to studying the bots, the researchers examined the political leanings of real human users and common hashtags in those 240 million tweets, as well as any tweets containing stories or other content from partisan media and traditional news outlets. 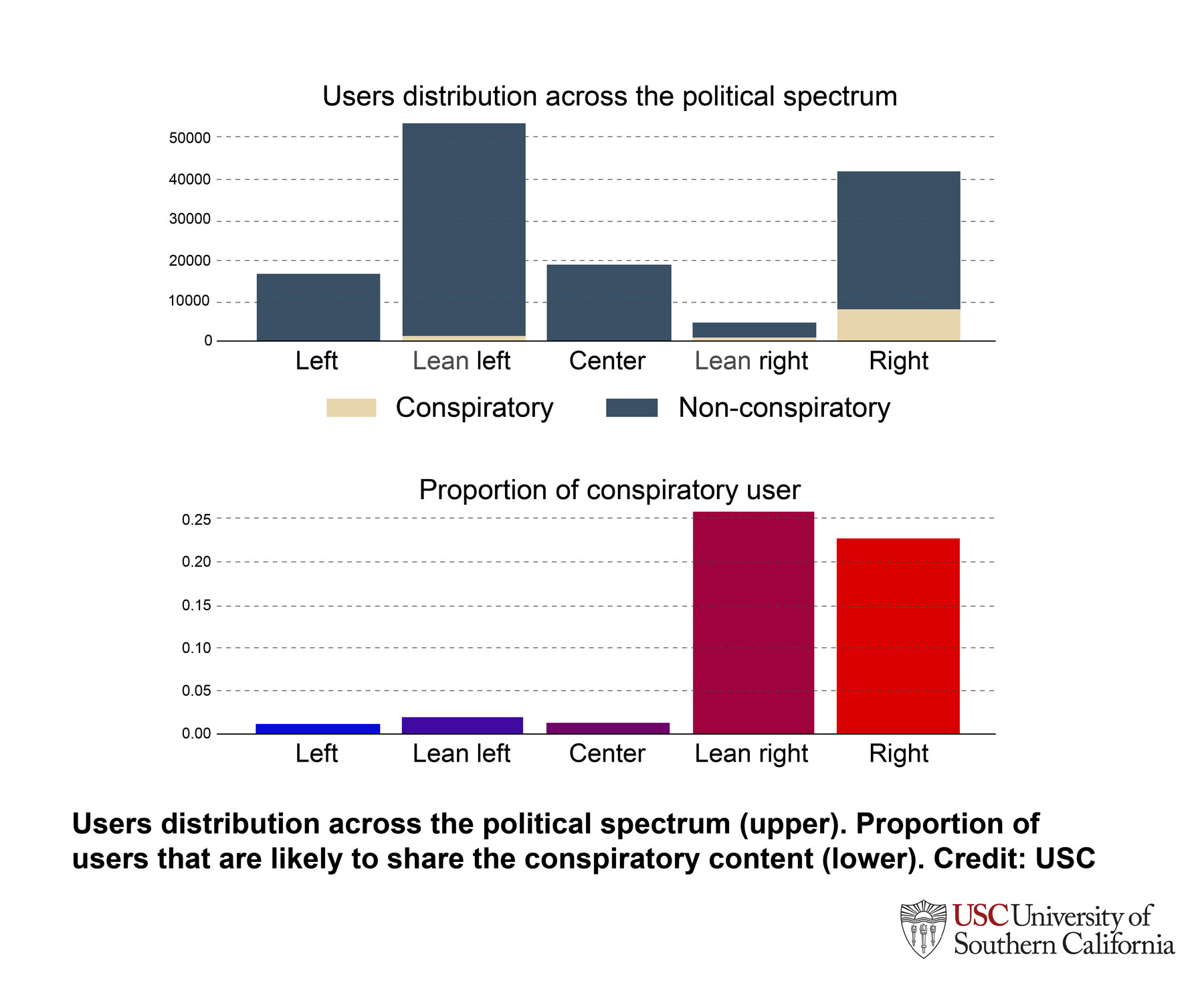 Highlights of the study included:

Ferrara led a study in 2016 just before Trump was elected that revealed the prevalence of what turned out to be foreign-operated bots, mostly Russian, on Twitter seeking to distort the election chatter. Ongoing U.S. investigations since have shown a consistent pattern of election cybersecurity threats from Russia, China and most recently Iran.

The latest study noted some foreign countries engaging in manipulation that previously were not.

“In short, the state of social media manipulation during the 2020 election is no better than it was in 2016. We are very concerned by the proliferation of bots used to spread political conspiracies and the widespread appeal that those conspiracy narratives seem to have on the platform,” Ferrara said. “The combination of automated disinformation and distortion on social media continue to threaten the integrity of U.S. elections.”

Other study authors were doctoral students Herbert Chang at USC Annenberg and Emily Chen at USC Viterbi, as well as postdoctoral fellow Goran Muric and master’s student Jaimin Patel, both with the USC Information Sciences Institute.

The Google-funded USC Election Cybersecurity Initiative has held workshops for officials around the country, bracing them for cyberthreats. Now, they are channeling their efforts into helping voters.

Does technology fuel polarization in the current political climate?

Experts gather at USC to talk fake news, the regulation of social media and more.

Election 2020 chatter on Twitter busy with bots and conspiracy theorists