With a significant boost to financial aid and a push for more access, USC welcomes a  fall 2020 class  with more first-generation students than ever before.

First-gen students make up 22.5% of this year’s 3,460 freshmen, USC’s largest incoming class ever.

“These students represent the values that USC holds high,” said Tim Brunold, USC dean of admission. “Thanks to our abundant financial aid pool, we can bring more remarkably talented students from all backgrounds to USC.”

The six high schools sending the most students to USC are all public. At the top of the list is Foshay Learning Center, a Los Angeles Unified School District school less than a mile from the USC University Park Campus. Foshay broke through in 2016, becoming the top feeder school to the university with 19 students. This fall, 25 USC-bound students — the most from any high school, public or private — graduated from Foshay.

Foshay’s numbers are bolstered with the help of the college preparation program, the  USC Leslie and William McMorrow Neighborhood Academic Initiative, which comes with full-tuition scholarships upon admission to USC.

NAI helped send 24 of the 25 Foshay students to USC. Students of NAI’s first graduating classes in the eastern area of Los Angeles also are attending USC, with two from Lincoln and nine from Wilson high schools near the Health Sciences Campus. With the inclusion of those two schools, NAI this year nearly doubled its college-bound cohort.

The number of students who are the first in their families to attend college has been growing steadily for five years, now hitting 22%. Nearly 20% of USC’s undergraduate students are first generation.

This summer USC President Carol L. Folt, known for her commitment to first-generation students, announced the founding of the  First Generation Plus Success Center. Its programs include advising and coaching, virtual peer mentorship, assistance to access financial aid and scholarships, and a variety of online success workshops for first-generation,  undocumented and former foster youth students.

A diverse group from just about everywhere

Underrepresented students of color make up 30% of the class.

Outside the United States, the most represented places of origin are China, India, South Korea, Canada and Taiwan. International students make up 12% of the incoming class.

A most impressive group

USC’s first-year admission rate was 16.1% of the 59,712 applications received. The average test score was in the 95th percentile and 26% were straight-A students.

About 21% of the 2020 entering first-year class received a merit-based scholarship from USC. 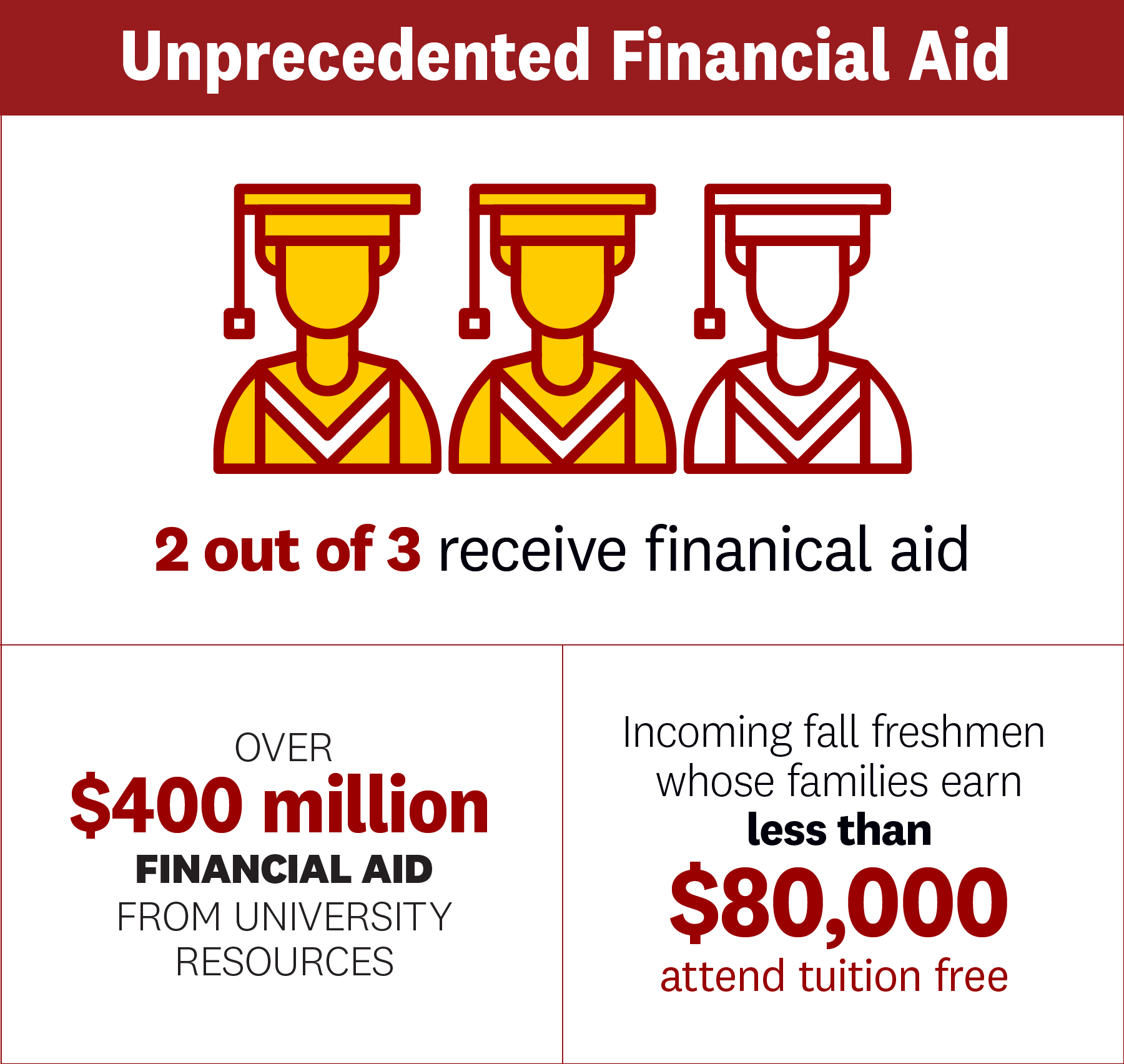 Many pathways to higher ed

USC continues to be a leader among private research universities in attracting top transfer students, which allows for an even more diverse student body. Military-connected students often find their way to USC as a transfer; this year, there are 41 veterans or reservists in the class. And 52% of the 1,447 transfer students hail from a community college.

The Class of 2024 shared a $400 million with other USC undergraduates. That pool, which draws exclusively from university sources, increased $19 million compared to the year before.

The incoming class is the first under a new USC initiative  to make college more affordable for lower- and middle-income families. Students from families earning $80,000 or less each year attend tuition-free.

Inspired by her children, Ana González never gave up. Now, she’s got her degree and years of college memories, including a memorable meeting with President Carol L. Folt.