They get to peek inside high-tech research labs and watch in awe as scientists pop balloons with lasers and illuminate darkened classrooms with zaps of static electricity.

It’s no wonder the campus visit with USC physics and astronomy experts has been the most popular field trip for years among eighth-grade students from A.E. Wright Middle School in Calabasas, Calif., some 30 miles northwest of University Park Campus. So when the coronavirus pandemic threatened to derail the annual event, organizers scrambled to find an alternative.

Their solution: an online physics and astronomy festival featuring a virtual tour of the space shuttle, a live Q&A session on the Zoom platform with USC researchers and plenty of exciting physics demonstrations — complete with exploding balloons and electrical light shows.

“The professors did such an amazing job interacting with the students,” said Leah Jenner, a science teacher at the middle school. “It opened their eyes to all different fields of science and how it applies to their life. This shows them the path to a career in science and what scientists actually do.”

That feedback gratifies Angella Johnson, demonstration lab manager at USC’s Department of Physics and Astronomy and lead organizer of the festival.

“At the end of the day, that’s what we’re trying to do — nurture and mentor these younger minds to get interested in science,” she said. “If you pursue your passion and have help, you could be the next Einstein.”

Johnson knows how meaningful it can be for young children to have scientists as role models. She loved visits to the planetarium and sci-fi shows like Star Trek as a kid. But it wasn’t until she attended an event held by the National Society of Black Physicists that she saw a place for someone like her in science. 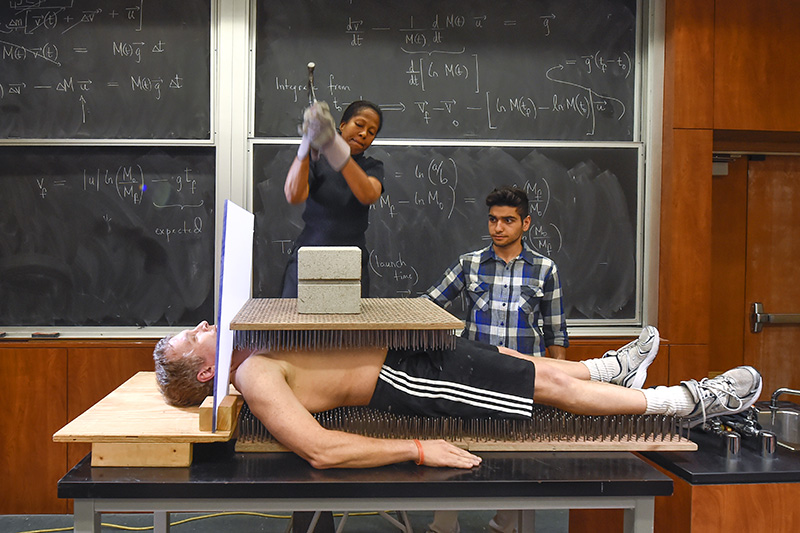 “I’m a double minority, being a woman of color,” she said. “It gave me the fuel I needed, the boost I needed to continue on.”

She studied physics at Temple University and came to USC, where she helps instructors demonstrate physics concepts to undergraduate and graduate students with hands-on experiments. To share her love of science with the next generation, Johnson organized a campus visit for eighth-grade science students from A.E. Wright four years ago. The event proved so popular that the department, part of the USC Dornsife College of Letters, Arts and Sciences, brought it back every year since.

The festival’s virtual stage offered another perk: For the first time, it was open to seventh-grade students as well. About 150 students, along with their teachers and family members, logged in to watch the show.

“It’s always such a pleasure to do this,” said Vitaly Kresin, a professor of physics and astronomy. “Kids really like science and are excited about learning new things. At that age, they recognize it’s really fun. They have not yet been subdued into thinking that science is all about homework and sticking things into equations.”

Cosmologist Vera Gluscevic described watching a movie as a young girl in Serbia that featured a smart and sophisticated woman astrophysicist. The cheesy sci-fi film inspired her to pursue a career in physics.

“Letting the kids know about opportunities and breaking stereotypes of scientists as being exclusively white men by showing who we really are is so powerful,” she said. “We’re sending the message that the image of scientists we’ve built throughout history is not true and that physics is within the reach of everybody who is curious about the world.”

A major highlight of the annual event is the physics demonstration. This year, Kresin and Associate Professor Vahe Peroomian explained the concepts behind experiments like the bicycle wheel gyroscope and the bowling ball pendulum. Dornsife Media Services handled the filming duties, even holding a pair of special goggles in front of the camera to show the colorful light given off by different gases.

“These are the same demonstrations we use when we teach our introductory physics classes on campus, so I know students like them,” Kresin said. “I’m a believer in the idea that it’s always fun to watch something blow up, so I never pass up an opportunity to pop a balloon with a laser.”

Kresin also took the students on a virtual stroll through his workshop on campus, using his cellphone camera to show off the inner workings of a real physics lab.

“There’s no pretending this is as much fun as when you see the kids in front of you,” he said. “There’s nothing to replace that roomful of people. But I’m really glad it worked out, and we heard that the teachers and students were pleased.”

Stephan Haas, department chair and professor of physics and astronomy, said moving the festival online this year enabled participants to home in on the science. Students peppered the faculty members with questions during the live Q&A — as one professor spoke, others responded to inquiries in the Zoom platform’s chat box.

“Scientifically, it was much more in-depth than any prior event,” Haas said. “In terms of content, wow, I don’t think we’ve ever dug that deeply.”

As he moderated questions, Haas delved into the backgrounds of the professors, asking them how they got their start in science — giving the teens insight into the researchers as relatable people.

“Each time, I learned something new,” he said. “Was there some event or person that really got you on a path to become an academic person or a researcher? These stories are interesting and very personal.”

Kresin, for instance, talked about growing up in the Soviet Union and being inspired by a demanding but supportive high school physics teacher. He wants to play a similar role for young aspiring scientists today, and he hopes the physics festival can continue to grow.

In a prior year, the group also invited students from nearby 32nd Street USC Performing Arts Magnet Elementary School to campus for the open house. Kresin would like to see USC involve more schools in the physics festival and other outreach events.

“It would be so nice to bring this to even more students,” he said. “Lots of kids need to see science being fun.”

More stories about: Astronomy, COVID-19, Physics, We are SC

Was there life on Mars? USC experts explore the upcoming NASA mission

With the Mars 2020 Perseverance rover about to launch, USC professors explain what we know about the planet already and what this latest mission can teach us.

Amid a time of cultural upheaval, the moon landing united millions

Fifty years after the first moon landing, USC professors reflect on how the Apollo 11 mission invigorated a tumultuous nation.

USC cosmologist works to make sense of a confusing universe

Vera Gluscevic studies the deep unknowns of space — including dark matter and dark energy — while pushing to make science more open and diverse.