When the pandemic hit, USC senior Madison Holbrook was about a month away from finishing a student film for her USC School of Cinematic Arts advanced production course. In the class, the group of undergraduate students creates four 12-minute films — from script to screen — in just 15 weeks.

“Who would have thought a pandemic would come in the middle of production?” Holbrook said. “We had just started post-production when we had to go our separate ways.”

Professor Brenda Goodman, who has taught this filmmaking class for over two decades, reached out to her 40-plus students following the move to online instruction. Her message was simple: “We’re going to keep going and we’ll figure it out.”

Goodman and the school supplied the editors and sound mixers with laptops and online editing programs to finish their short films: Spit It Out Margot, produced by Holbrook, along with You Missed a Spot, The Order and Straw Man.

“It is really competitive. Everyone wants to be able to be a producer, director or have their script chosen,” Holbrook said. “But in the end, only four films will be selected.”

The selection of Holbrook’s film would prove to be history in the making. It was the first all-female/non-gender-conforming production in the history of the class, the longest-running production course at USC.

“Everyone, all the way down to our PAs,” she said. “It wasn’t really intentional, like ‘no boys allowed.’ It just happened that way.”

Holbrook said the biggest hurdle in finishing the film was the loss of in-person communication. But she was determined to keep communication open because filmmaking is, above all else, collaborative.

I learned you’ve just got to roll with the punches.

“I would go on Zoom calls with the editor as she was editing to mimic the idea that I was there,” Holbrook said. “The biggest takeaway was adaptability — I learned you’ve just got to roll with the punches.”

Against all odds, all of the films were finished in time for the official film school screening at the semester’s end. However, unlike previous years — during which screenings were held in-person at the school’s Eileen Norris Cinema Theatre, with students and their families attending — this would be a virtual screening.

“Of course, I was upset that we couldn’t have an in-person screening,” Holbrook said. “Then I thought, maybe this is an opportunity” — an opportunity for her brother Seth, an Army specialist serving in Iraq, to attend. Since joining the military in 2012, he had missed most of his sister’s milestones, including her high school graduation and all of her USC events. 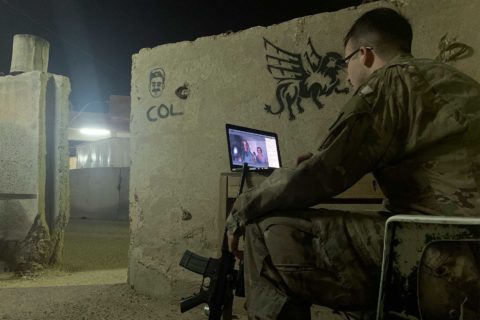 “He’s never been able to see any of my film projects,” Holbrook said. “I remember texting him, knowing he’s on an Army base in the middle of nowhere, to see if he could make the virtual screening. This time, he said he could.”

There was one caveat: The screening had to happen precisely at 2:30 p.m. PDT on Sunday, May 17, due to the soldier’s regimented military schedule.

Now it was up to Goodman and the rest of the students to agree to that date and time to hold the screening. Some of the students were living in other parts of the world with their own time-zone challenges, including China, Finland, Hawaii, Sweden, Singapore and Thailand.

Holbrook, who hadn’t seen her brother since July, said it was an emotional moment to have him join the screening.

“He finally got to see something of mine and I’m just so happy,” Holbrook said. “He was texting me through the screening and sending Snapchats saying, ‘I love you, I’m so proud of you.’’’

The Army specialist said his sister has done everything possible to set herself up for success.

“When you see her final work, not only does she love this but she is great at it too,” he said. “She has grown up so much in these past four years of her schooling, and she has all the potential in the world to be successful in this industry. I couldn’t be prouder of my sister and I can’t wait to see what she does in her career.”

Without the support of her close-knit classmates and Goodman, Holbrook said, it would not have been possible.

“Brenda was so supportive,” Holbrook said. “She was helping us every step of the way and has always been our No. 1 supporter in the class.”

Goodman said that’s simply what filmmakers do: They collaborate and recognize the power of stories being shared with everyone — even with a soldier on an Army base halfway around the world.

These kids are storytellers.

“Not only do we need film to be entertained and distracted a little bit, but we need it to think beyond what is immediately around us and understand the larger condition of life,” Goodman said. “That’s the job of a storyteller — these kids are storytellers.”

“Their level of artistry and talent was always evident,” Goodman said. “But after they went into quarantine, they became so much more nimble. The fact that they could accomplish this in such a polished way and prove themselves in this environment — they will be a great asset to the film industry.”

Holbrook said she definitely grew as a producer during this unprecedented time.

“I loved my last semester at USC,” Holbrook said. “It wasn’t what I was expecting, but it still turned out OK and here we are: We just screened our film, and everyone loved it — including my brother — and it was just positive in the end.”

High school students from military families aren’t always sure what to expect from college. That’s where the USC Provost’s Pre-College Scholarship for Military Families comes in.

Why it’s important to see marginalized communities in pop culture

As the Oscars near, USC anthropologist and playwright Dorinne Kondoto argues that we all need to be ”mirrored” in popular culture, media and the arts.