Like so many Trojans, freshman Cooper Roth entered the spring semester eager to set the world on fire.

Roth had been busy studying film and TV production at the USC School of Cinematic Arts when the COVID-19 pandemic forced him and his fellow students to abruptly end their on-campus classes and move to online instruction for the rest of the semester.

“He was at the Rolls-Royce of film schools, one of 50 students to get in, and he was so excited to be connected with kids who are creatively like-minded,” said Cooper’s father, J.D. Roth. “Then all of sudden, he had to unplug from all of it.” 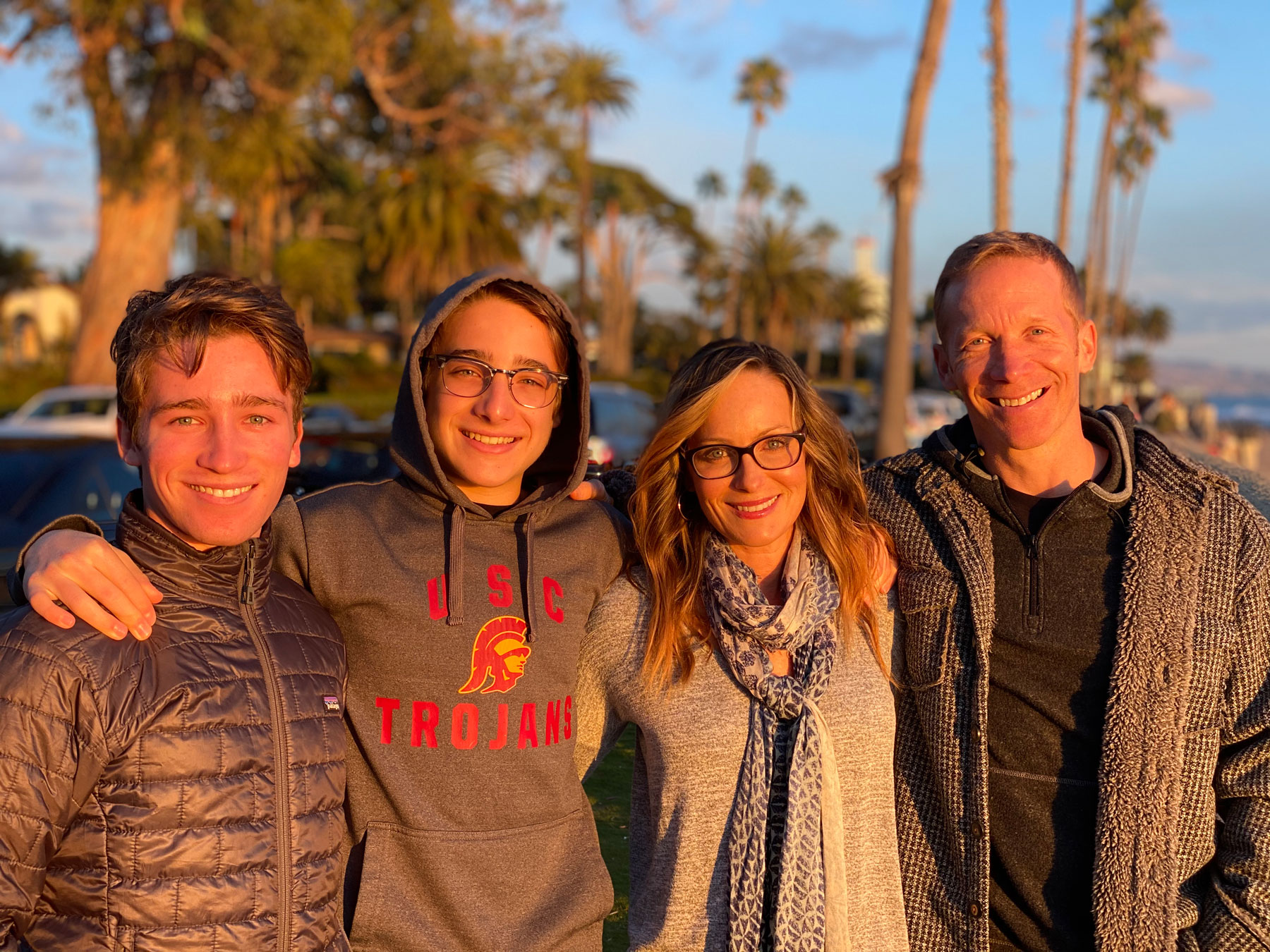 The Roth family, from left: Cooper, Duncan, Chrissy and J.D. (Photo/Courtesy of the Roth Family)

The elder Roth knows first-hand what it’s like to be a wide-eyed freshman at USC: He attended the university for two years before landing a full-time job as a TV host. He would go on to create several hit television shows, including The Biggest Loser, Bar Rescue and My Cat From Hell. He was in production on five shows when the pandemic forced widespread closures.

Now with everyone at home — Dad, Mom and their two sons, 19-year-old Cooper and 16-year-old Duncan — the family began adjusting to their new normal. That included online classes for the first-year Trojan.

While the freshman admits that some classes have been challenging in the online environment, Roth had words of praise for how his professors have adapted.

“One of my favorite classes is ‘Comedy Writers and Their Work’ taught by [Robert] Ramsey,” Roth said. “Normally, we would watch a movie packed together inside the massive SCA Norris Cinema Theatre, so I was curious how that would work now and what to expect.” 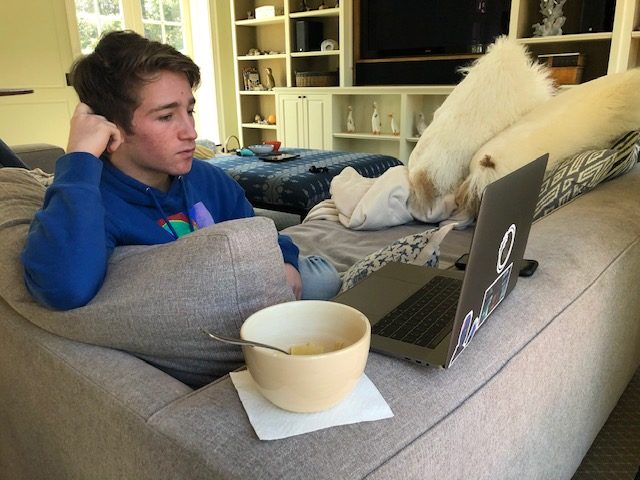 Roth in his screenwriting class with Robert Ramsey and 160 classmates. (Photo/Courtesy of the Roth Family)

Roth said his expectations were met — and then some — when Ramsey held a Zoom videoconferencing class that included the director of one the films being discussed.

“Literally 160 students were Zooming with Professor Ramsey and the director,” Roth said. “It was really amazing. We were typing in questions and doing a live Q&A.”

Cooper’s mother, Chrissy, is usually nearby when her son is taking his classes in this new virtual world. She’s impressed with what she’s seeing.

“I say, thank god for these online classes. I think USC is doing an awesome job,” she said. “They are making it work, putting in a tremendous amount of effort and it’s only been a couple of weeks. It’s only going to grow and get better from here.” 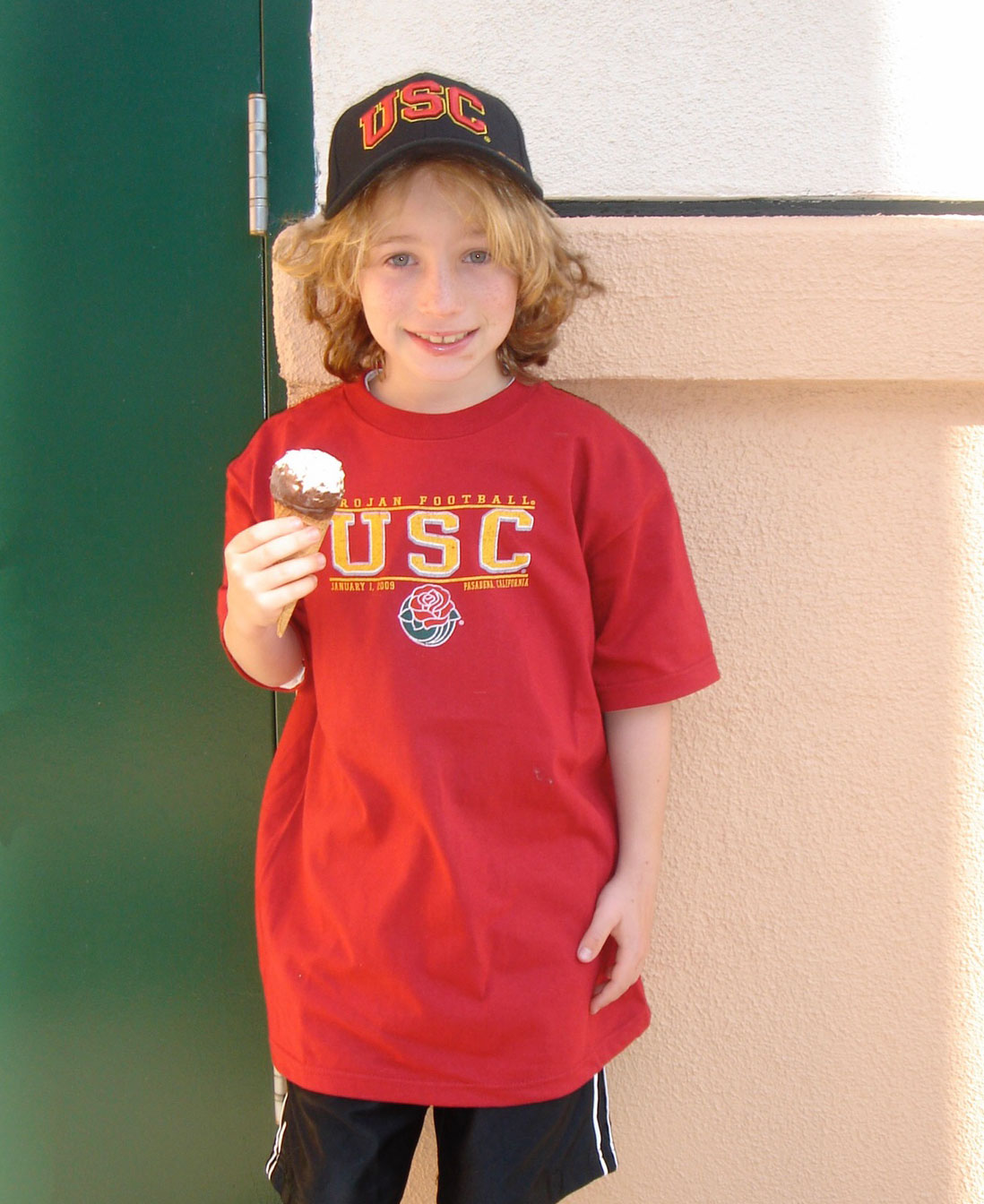 Roth has been a Trojan fan since childhood — as evidenced by his wardrobe at age 10. (Photo/Courtesy of the Roth Family)

And while Roth’s parents say it’s hard to replace the experiential and engaging side that in-person classes offer, they are keeping things in perspective and looking on the upside.

“For me, it’s the family dinners that have been really nice,” Chrissy Roth said. “We have great conversations, a good amount of laughing and serious talks too about the state of our world. Right now, going to bed with all of my family under the same roof makes me happy.”

Then there’s their extended family at USC.

“I’ve always been enamored with the Trojan Family, the USC spirit and the deep well of alumni and the legacy of teachers,” J.D. Roth said. “I know for a fact that whatever education they are providing to my son is the absolute best that they can provide — even online.”

USC experts note that COVID-19 is the latest calamity for a generation that has experienced life-altering disruptions, from 9/11 to the Great Recession.

How parents can talk to their kids about COVID-19

From taking their fears seriously to finding new ways to be active together, USC experts offer insight into how parents can help their children during the COVID-19 pandemic.

COVID-19 media coverage has largely pitted younger people against those whose age makes them more vulnerable to the virus. But USC gerontologists say intergenerational programs that efforts to bring seniors and young people together in everyday life could build more understanding.