The pale-yellow creatures cling to the sides of half-gallon plastic tubs in a dark science lab, their wispy tentacles swaying gently in the water. They can’t speak, but these dime-size sea anemones might give researchers answers to an important problem: how to protect sea life from climate change.

USC student Connie Machuca believes in their potential. She studies the genes of these tiny invertebrates, known to scientists as Aiptasia. Her goal is to understand how they deal with rising water temperatures, differences in the water’s saltiness and other consequences linked to the changing climate. Because Aiptasia share many characteristics with coral, studying them could reveal new ways to care for endangered underwater ecosystems like reefs that are dying due to coral bleaching. 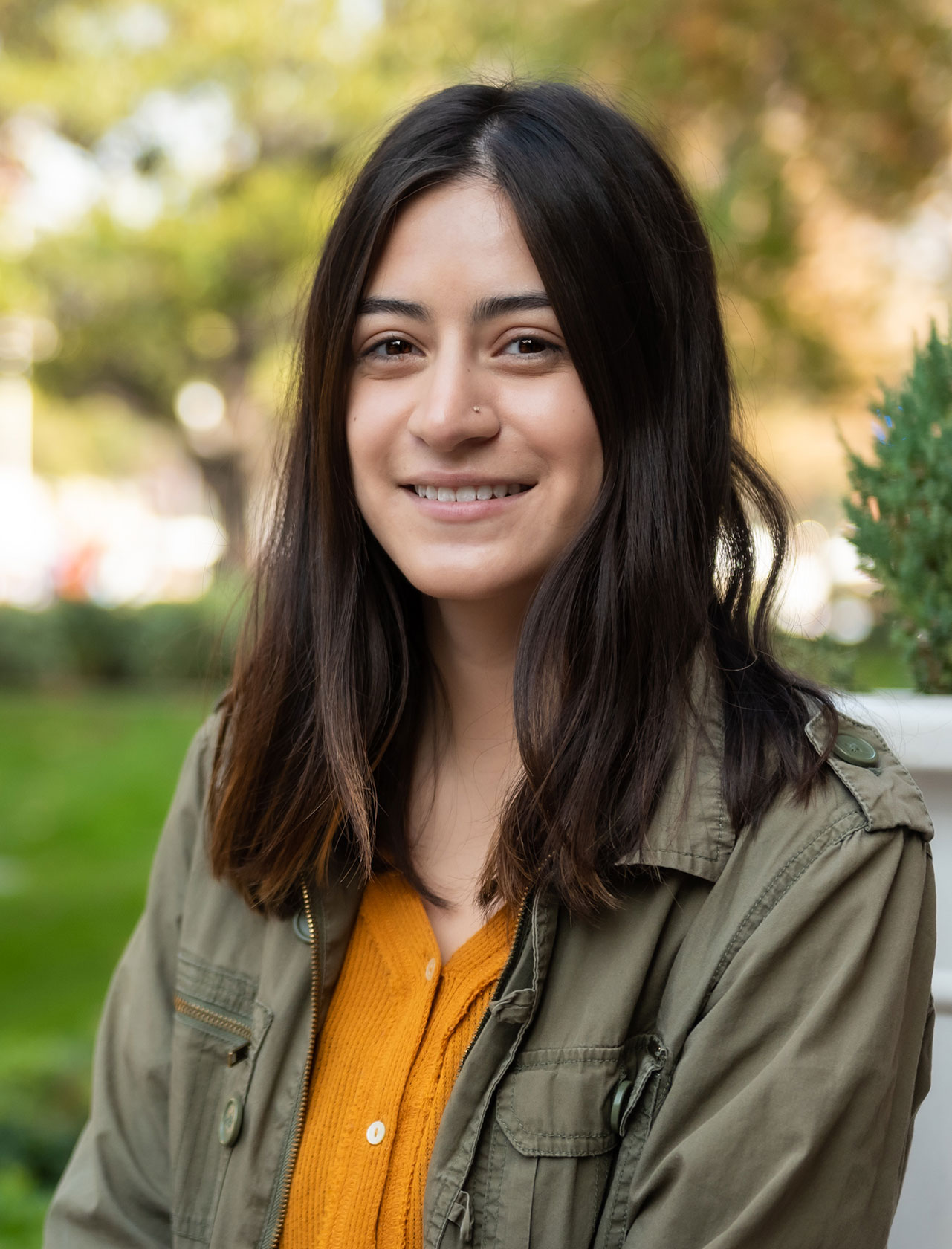 “We don’t really see ocean temperatures decreasing or storms getting less intense,” she said. By figuring out what genes might protect these ocean animals from warmer temperatures or rougher seas, she believes scientists could help them adapt to their new conditions.

Machuca grew up in Chicago and never thought much about the beach before coming to USC, so she admits studying sea life is an unusual passion. But she was drawn to the field of ocean conservation and marine research at the USC Dornsife College of Letters, Arts and Sciences thanks to hands-on work with environmental marine biologist Carly Kenkel. She dove into coral and anemone studies in Kenkel’s lab as a sophomore and never looked back.

As Machuca pursued her degree in environmental studies with a minor in marine biology, the first-generation college student learned how to scuba dive. She traveled across the country to help collect anemone specimens. She conducted her own ocean research at Catalina Island. She also joined the Trojan Marching Band, playing cymbals in the drumline.

Looking back now as her undergraduate experience winds down this spring, Machuca is grateful for those opportunities and many more she had as a Trojan.

“I always wanted to come here, and USC has shown me that I’m here for a reason,” she said. “I have no regrets whatsoever. In the beginning, it was hard being away from my family, but I’ve made the most of it and showed them that all their sacrifices were worth it.”

A first-gen student’s advice on getting involved in research

Senior Connie Machuca admits she initially was scared to reach out to professors or other students for advice when she first started at USC.

She’s in the first generation of her family to go to college; her mother and grandmother immigrated to the United States from Ecuador 25 years ago. But she pushed past that fear and asked for guidance.

Her courage landed Machuca a spot in a research lab and helped her discover her passion for marine science. Now she encourages other first-gen students and undergrads interested in research to take that brave step.

“Don’t be scared to ask for opportunities that maybe you think you’re not ready for,” she said. “There will be people who believe in your potential.”

Machuca gravitated toward environmental issues early in life. She did science projects in school on water quality in Chicago and Lake Michigan. She grew concerned about the effects of pollution and climate change, not only on people but also on plants and animals.

When Machuca came to USC four years ago, she was interested in environmental studies — but was unsure where to focus her attention. Ocean researcher Jill Sohm suggested finding a research position to gain experience and pointed her to Kenkel, who had just launched her lab focused on aquatic invertebrates like coral.

“Professors here are super understanding when you don’t know something or you come from a background where you don’t have experience,” Machuca said. “I didn’t have any research experience, but I was able to talk to some professors: ‘This is what I’m interested in, what do you think I should pursue?’ Having that relationship outside of lectures was really helpful for me in deciding what I wanted to do.”

As an assistant in Kenkel’s lab, she grew fascinated with how climate change is affecting coral, anemones and other ocean creatures known collectively as cnidarians. Some of these animals have a give-and-take relationship with algae, Machuca said, relying on them for food. Rising water temperatures or other changes can prompt coral to kick out the algae living in their tissue, eventually leading them to starve. That’s the main cause of coral bleaching, which has devastated reefs around the world.

Studying coral is tricky, though. The finicky creatures need new seawater shipped in regularly and are sensitive to changes in their habitat. Aiptasia, on the other hand, thrive in so many conditions that they’re known as aquarium pests. Like coral, they have a symbiotic relationship with algae — but they also can survive without them.

Machuca thinks Aiptasia can stand in for coral in research labs. They could help scientists find solutions to the effects of climate change without the challenge of trying to keep their specimens alive.

“I want to show there is a wide range of genetic diversity with this invertebrate, so that it can be widely used as a model for coral,” she said. “That way researchers won’t have to use coral specifically to test and do experiments.” 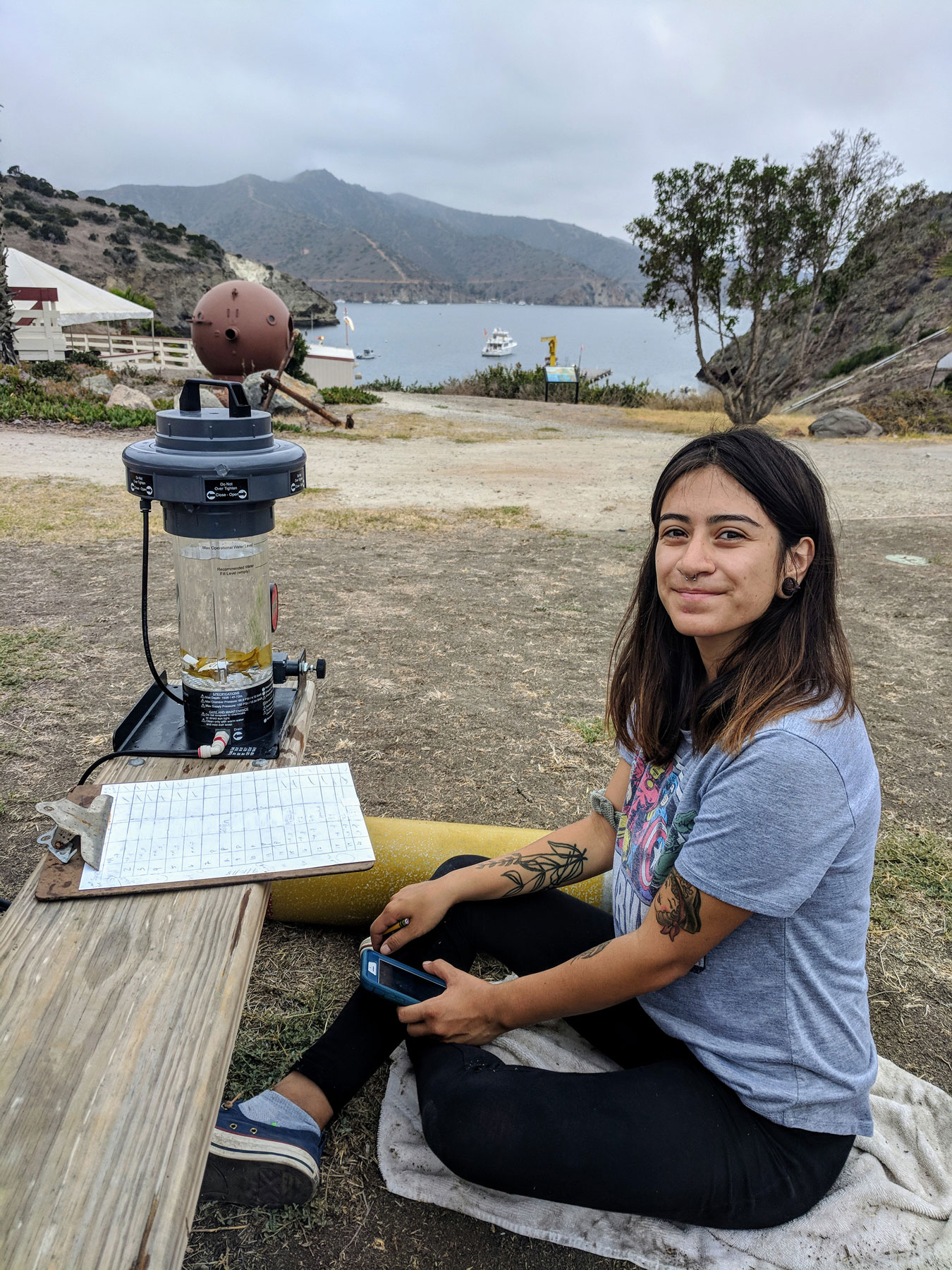 Connie Machuca uses a small pressure chamber to study how juvenile kelp responds to increasingly intense water pressure during an experiment at the USC Wrigley Institute for Environmental Studies on Catalina Island. (Photo/Courtesy of Connie Machuca)

Places like Australia, Fiji and New Zealand rely on coral reefs and ocean habitats for eco-tourism and economic stability, she said. Most of the people living within 100 kilometers of coral are in areas classified as developing or impoverished.

“It’s not just the ecological context, it’s also people’s livelihoods that are at risk with declining coral,” she said. “If the ocean conditions are not great, the economic well-being of these places is threatened.”

Machuca’s passion for marine research has taken her far beyond the basement lab at USC. She traveled to Florida last summer to collect anemone specimens using a SURF grant from USC Dornsife. Another summer, kelp research took her to Catalina, with funding from the National Science Foundation. She earned her scuba certification last year and now is taking a scientific diving course offered at the USC Wrigley Institute for Environmental Studies so she can conduct underwater research in graduate school and beyond.

“I have been continually impressed with her initiative, independence and resourcefulness,” Kenkel said. “From initially working to develop her skill set, to investigating the primary literature, to obtaining her own funding, to now executing her research program, she has exceeded my expectations in every facet of her work.”

Machuca also participated in a naturalist training program through USC Sea Grant, learning about California’s natural history with a focus on coastal areas. The experience helped her teach kids during an internship at a nature camp in Chicago. One of her goals is to instill curiosity in future generations and ensure they have resources like the ones that have helped her thrive at USC.

“Access to papers, being able to talk to researchers, being able to go to the Florida Keys and collaborate with other scientists — those kinds of things aren’t widely available to other students and people who might want to get more involved in research,” she said. “I want to share this information with younger generations, so they grow up with a different mindset and maybe have different goals in terms of research and science.”

She envisions research playing a big role in her career, and she is currently applying to advanced degree programs with plans to continue studying how sea animals are affected by environmental changes. Machuca credited the support and advice of mentors like Sohm and Kenkel for giving her confidence.

“Knowing that there were professors who believed in me despite my limited experience was something that helped me get to where I am today,” she said. “I feel like USC does a good job at giving less-experienced people the opportunity to be great and realize their full potential.”

How some corals might help their offspring survive warming oceans

USC researchers have discovered that corals can pass on their reshuffled symbiotic algae, which may help their progeny withstand climate change.

Secrets of undersea chemical reaction revealed; could they reduce CO2 in the atmosphere?

Scientists speed up a natural process that occurs deep in the ocean, raising the possibility that humans could help the Earth cope with greenhouse gases.