USC and the Los Angeles Police Department honored the Rev. Martin Luther King Jr. on Saturday at the 11th annual brunch to celebrate his life and legacy.

“We are here today to honor a man whose legacy is one of dignity and social justice,” LAPD Deputy Chief Regina Scott said to open the Martin Luther King Day Celebration, which took place at Town and Gown on the University Park Campus. 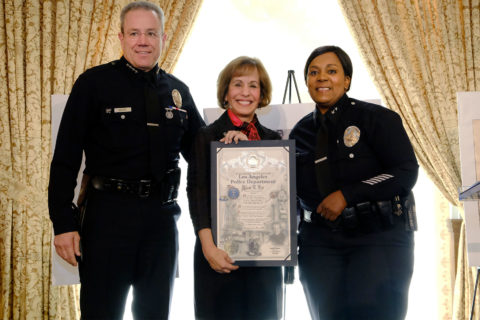 “Darkness exists, injustice exists, and it takes each and every one of us to lift each other up.”

USC President Carol L. Folt talked about King’s legacy of service and how it impacts USC.

“At universities like USC and across the country, we are committed to finding ways to keep Dr. King’s legacy alive every year,” she said. “And we do it often every day by focusing on community service, focusing on living our values and focusing on social responsibility.”

Folt also praised the university’s partnership with the LAPD, noting that it goes far beyond a once-a-year brunch.

“Building community — it’s not just diving in and doing things to the community. It’s living in partnership with the community. It’s giving service to the public good,” she said. “Community was vitally important to Dr. King, as it is to everyone in this room, and indeed at USC we share a commitment to this community both in action and in spirit with the LAPD — and we do so many programs together.”

The King brunch began with a moment of silence in honor of Earl Paysinger, the former LAPD assistant chief and USC senior vice president of civic engagement who died in December. “He was such a leader, who was so dedicated to reaching out to the community,” Folt said.