According to Assal Habibi, a neuroscientist and psychologist at the Brain and Creativity Institute at the USC Dornsife College of Letters, Arts and Sciences, learning to play a musical piece is very similar to conducting research.

“When you play a piece of music, you have to put note by note together, then measure by measure together, and eventually you make it to the full page,” said Habibi, who began learning classical piano as a 5-year-old growing up in Tehran, Iran. “It’s a very similar process in research. It’s very slow and you build it in little blocks, one on top of the other.”

Note by note, she has crafted her own opus of research into how music impacts the brain. Most of it is based largely on a longitudinal study of Los Angeles-area students that she has led with Brain and Creativity Institute co-directors Antonio and Hanna Damasio since 2012. None of it would have been possible without several collaborators, including the Los Angeles Philharmonic and their musical education program, Youth Orchestra Los Angeles at Heart of Los Angeles (YOLA at HOLA).

NIH grant will further research into music and the brain

Throughout the seven years of the study, Habibi has also collaborated with various experts across the university, including at the USC Viterbi School of Engineering, the USC Rossier School of Education and the USC Thornton School of Music. So far, the research indicates that musical training is beneficial for children’s brains, strengthening networks that process sound, language and communication as well as engaging areas that are responsible for decision-making, focusing attention and inhibiting impulses. 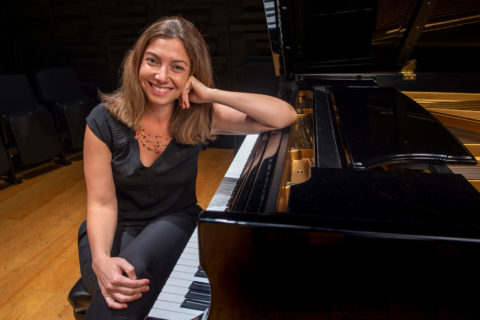 Habibi started playing the piano at the age of 5. (USC Photo/Gus Ruelas)

The latest good news for Habibi came this fall when the National Institutes of Health announced that she — as well as one other USC researcher, Raymond Goldsworthy of the Keck School of Medicine of USC — would be awarded grants from the $20 million Sound Health Initiative, a partnership with the John F. Kennedy Center for the Arts with support from the National Endowment for the Arts.

In announcing the new round of funding, NIH Director Francis Collins said the grants represent the beginning of what he hopes will be a long and productive partnership between music and neuroscience.

“I am convinced that the power of science holds tremendous promise for improving the effectiveness of music-based interventions, and expanding their reach to improve the health and well-being of people suffering from a wide variety of conditions,” Collins wrote on his NIH blog.

Habibi will receive $450,000 from the NIH over two years to examine the differences in effects among children who are learning music and speak more than one language, as compared to children who know just one language.

“In the studies that we’ve done, we’ve come across this finding that musical training helps with executive function skills like impulse control and better memory,” she said. “However, most of our participants were bilingual. We are curious to find out whether — and how — bilingualism and music training interact to boost executive function skills. We need to study this.”

The children will be interviewed, complete surveys and participate in brain scans, including at the Brain and Creativity Institute lab, where Habibi and her colleagues are gathering data that — over time — will show changes in their brains. The results will be compared to those of other children their age who are not receiving any musical training but who are also participating in the study as part of a control group.

For the study phase that began in 2012, the researchers focused on following children ages 6 and 7 as they were taught violin and to read music through the YOLA program. The researchers compared their results to those of students who played sports and another group of students who had no extracurricular activities.

The investment in music studies and music training is a dream come true.

“We have now robust data that show learning music helps them with these executive function skills like task switching and delaying gratification,” Habibi said. “We also have data that shows that it increases their empathy response. It enhances their ability to be more prosocial in terms of sharing and helping behavior. It does have benefits across the board, and we see changes in their brain structure and function that is different from children who do not have any training.”

For this latest round of study — which began nearly a year ago and is supported by GRoW @ Annenberg and the L.A. Philharmonic — the study was expanded to follow 150 children into fifth grade and middle school, important periods of brain growth.

“We are specifically looking at their emotion processing and stress regulation within their middle school years, when the environment is more socially complex,” Habibi said.

With support from government agencies like NIH and art organizations like the philharmonic, Habibi believes that neuroscientists and psychologists may prove that music can be an important instrument for boosting children’s emotional and intellectual growth.

“The investment in music studies and music training is a dream come true,” she said. “I hope it leads to even more evidence on the benefits of music.”

A cochlear implant helped Ray Goldsworthy regain his hearing. Now, he’ll use his research — and a $2 million grant from the National Institutes of Health — to help others with implants connect to music.

How does music affect our brains? USC researchers use AI to investigate

A team of computer scientists and psychologists teamed up to investigate how listening to music impacts how we act, feel and think.

Five-year USC study finds significant differences between kids who learned to play instruments and those who didn’t.