In Southern California’s sizzling heat and searing sunshine, many people reach for a wide-brimmed hat and spread on sunscreen before braving the outdoors.

But USC researchers are concerned that many Hispanics, who represent nearly half of the Los Angeles population, view protecting their skin from the harmful rays of the sun as an afterthought. It’s a worrisome trend, because they are increasingly being diagnosed with advanced cases of the deadliest type of skin cancer: melanoma.

Although Hispanics tend to have less melanoma overall than non-Hispanic whites, “when they do get it, it’s far worse,” said Myles Cockburn, professor of preventive medicine and dermatology at the Keck School of Medicine of USC. “They have far worse late-stage rates and they die more often.”

Cockburn and his collaborators are studying the causes behind that worrisome pattern to guide prevention efforts. And they’re trying to tackle the problem early in life through education. They regularly visit Los Angeles schools with student volunteers from USC to teach kids in fourth and fifth grades about the importance of sun protection.

Their work is critical: Cockburn said even one severe sunburn as a child can double the risk of developing melanoma in adulthood. 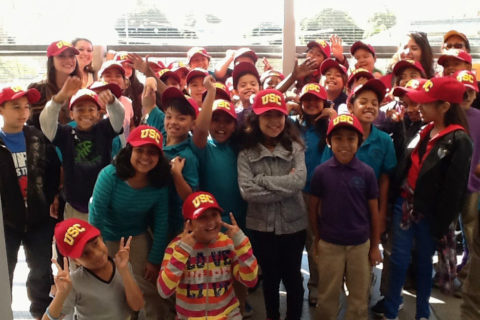 USC researchers and student volunteers hand out free hats and encourage local kids to protect their skin from the sun. (Photo/Courtesy of Kimberly Miller)

Their educational efforts with local students show promise, according to preliminary results. Three months after learning about the dangers of sun exposure, kids are more likely to practice protective habits like wearing hats and protective clothing, slathering on sunscreen and staying in the shade.

“We’re moving them in the right direction,” said Kimberly Miller, clinical assistant professor of preventive medicine and dermatology at the Keck School of Medicine. “Their behavior is changing.”

Hispanic people account for more than 18% of the U.S. population, and the federal government expects that number to swell to nearly 29% by 2060. California is ahead of the trend — nearly 40% of the state’s population and nearly 50% of Los Angeles County residents are Hispanic.

In the last decade in California, Cockburn said more than 4,000 Hispanic people have been diagnosed with melanoma, an especially dangerous form of skin cancer. More than 600 of those cases ended in death.

During a recent presentation at the American Association for Cancer Research’s annual conference, USC researchers also noted that Hispanics with melanoma tend to be diagnosed with larger tumors than patients in other ethnic groups. Tumor size is a leading predictor of death, and Hispanics have a lower rate of survival 10 years after a melanoma diagnosis than non-Hispanic whites.

“It could be there is a lack of awareness on the part of providers who are treating Hispanic patients,” Miller said. “There might also be a perception that if you’re Hispanic, you don’t get skin cancer.” 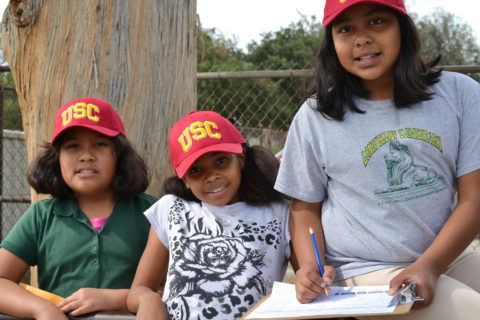 USC researchers said that even one severe sunburn as a child can double the risk of developing melanoma in adulthood, so it is important to educate kids on the effects of sun exposure. (Photo/Courtesy of Kimberly Miller)

In their research, the USC team found strong evidence that later diagnosis accounts for the lower survival rate among Hispanics. That’s good news, Cockburn said, because it shows that more Hispanics will survive melanoma if they’re diagnosed earlier — and that can be addressed through education and by promoting regular skin checkups.

He suspects many patients and even some doctors subscribe to the popular myth that Hispanics don’t need to worry about skin cancer. “They might have some access-to-care issues as well,” he said. “That’s a good problem to have, because most of these things are fixable.”

Increased screening rates and better access to treatment are critical to reversing trends in melanoma-related deaths among Hispanics. But USC researchers want to stop the deadly skin cancer before it starts through prevention. They’ve worked with USC’s Joint Educational Project since the mid-2000s to provide skin-related health information to students in local elementary schools through a program called SunSmart.

Every year, dozens of USC students teach kids about the effects of ultraviolet rays from the sun and how light can be reflected off surfaces like concrete to worsen those effects. Recently, the USC group handed out devices called dosimeters to kids. The children wear them and the dosimeters show how much sunlight they’ve been exposed to throughout the day.

“They also did some activities with solar ovens, showing how hot the sun truly is and its power as an energy source,” said Jose Rodriguez, a former principal at Gates Street Elementary School who now works as an administrative coordinator with the Los Angeles Unified School District.

He saw an immediate effect on his students when they participated in SunSmart several years ago. When parents came to campus to discuss their child’s progress, he said many noted that their child had started talking about sun exposure and asking for sunscreen. The students also took to wearing protective clothing like free hats provided by the USC team. 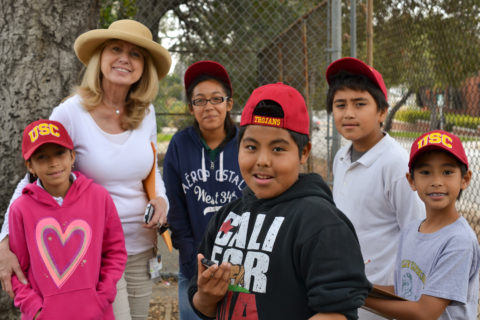 “They would wear those hats every day, down at recess and lunch and after school,” Rodriguez said. “I could spot them walking along the street.”

That anecdotal evidence is encouraging, but USC researchers wanted to rigorously test the effects of the SunSmart program. They surveyed participating students about their knowledge of sun exposure and use of protection like hats and sunscreen before and after the program.

Prior studies have uncovered incorrect perceptions that Hispanic people and people with darker skin don’t need to worry about sun exposure because they don’t get sunburns — or exposure isn’t as serious for them. USC researchers discovered that nearly two-thirds of Hispanic kids they surveyed in fourth or fifth grade reported getting a sunburn, similar to rates among non-Hispanic white children.

Less than a third of Hispanic students in another study by the research team used multiple sun protection methods, like putting on sunscreen and wearing long-sleeve shirts and pants. USC scientists have found some effects of acculturation; recent immigrants tend to wear more protective clothing but then take on dangerous habits like tanning as they settle into American society.

“As a country, we’re not very good at sun protecting,” Miller said. “Most of us use sunscreen, but that’s about the only thing we do. It’s probably not the most effective way to sun protect.”

Cultural norms may play a role in sun protection among Hispanics

As a Los Angeles educator, Rodriguez said he’s not surprised to learn about low awareness of the importance of sun protection among some members of the Hispanic community.

“They never saw the need, especially because they thought having some color to your skin would protect you,” he said.

As a country, we’re not very good at sun protecting.

Rodriguez had a similar mentality early in life. He grew up in Watsonville, a farming community on the coast of Northern California, working alongside his father picking strawberries beginning at age 14. He hated picture day at school, because he often had peeling skin on his nose or ears from a recent sunburn.

“I never saw the connection between the sun and skin cancer,” he said. “I just wanted a job with shade.”

When he got older, he learned it was important to protect his skin from the sun. Now he makes sure his own kids put on sunscreen before they head to the beach or pool. And he’s glad to see the push for more education among local students through programs like SunSmart.

The USC team’s initiative in schools appears to be paying off. The research team recently surveyed Hispanic or Latino kids in Los Angeles who participated in SunSmart. They found the percentage of students who reported getting a sunburn in the previous month dropped from 35% to 11% after the program.

Cockburn and Miller said they want to continue adjusting their outreach efforts to improve those rates. They are also looking into developing a smartphone app with colleagues at USC to engage younger audiences and ensure their approach can be easily replicated in other places.

Finally, they are planning to get parents more involved, because they have a major influence on knowledge of sun exposure and protective behaviors among kids.

“It plays into cultural values in Hispanic families of what we call familism — having very close, integrated relationships within the family unit,” Miller said. “It’s very appropriate for us to look to the family as the crucible of behavior and try to influence everybody together.”

USC researchers dispel myth that tanning is a problem only among white, college-age women.

Public health campaigns have tried to persuade people that tanning is a bad idea for many years.

Tips for sun safety from a USC disease prevention expert

Don’t get burned–not all sunscreens are created equal

California appears to be in for a dry, warm winter

La Niña conditions in the Pacific Ocean may lead to sandals and sunglasses at Christmastime. USC experts explain what such warm weather means for the state’s water supply and wildlife.

USC wave expert Adam Fincham assembled a team to bring a little science to a big-wave contest, with bragging rights and prize money on the line.