A new USC study shows that mint was the most popular flavor of e-cigarettes used by U.S. teens in 2019, a finding that could impact proposed federal regulations intended to rein in soaring e-cig use among youth. 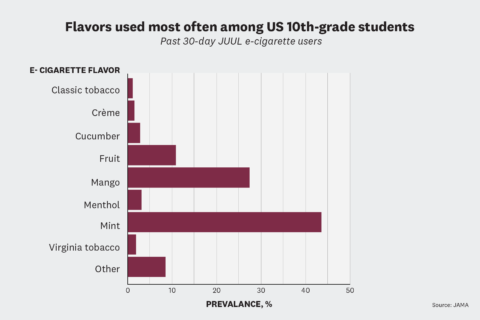 The research, which appears today in JAMA, departs from previous studies in 2016 indicating that teens primarily prefer fruit or candy flavors. This new study shows that while fruity flavored e-cigarettes continue to be much more popular than tobacco-flavored e-cigarettes, mint was the top choice among teens this year.

The findings cast doubt on the effectiveness of Juul voluntarily pulling its e-cigarette product in some flavors but leaving mint, menthol and tobacco on the market. The FDA in September announced it would clear the market of all e-cigarettes with non-tobacco flavors; the Trump administration reportedly is considering a plan to ban all flavors except for menthol and tobacco.

“Our study calls into question whether regulations or sales suspensions of flavored e-cigarettes that exclude mint flavors would meaningfully reduce youth vaping,” said Adam Leventhal, director of the USC Institute for Addiction Science and professor at the Keck School of Medicine of USC and USC Norris Comprehensive Cancer Center.

USC’s study focused on Juul products, the most popular e-cigarette brand. Data were collected via the 2019 Monitoring the Future study, which annually surveys eighth, 10th and 12th grade students in U.S. schools. A randomly selected third of survey respondents, totaling 14,191 youth, were asked, “Which Juul flavor do you use most often?”

Of teens who self-reported using Juul e-cigarettes in 2019, mint was the most popular flavor in 10th and 12th grades and the second most popular in eighth grade, behind mango.

Among both 10th and 12th graders, mint and mango ranked first and second (at about 44% and 27% for 10th graders; 47% and 24% for high school seniors). Among eighth graders, mango was most popular at 34% followed by mint at 29%. In all grades, fruit flavoring was ranked third, followed by “other.” In heavy vaping teens who used Juul on 20 or more days in the past month, mint was the most popular flavor in all grades.

A study by Leventhal published Oct. 28 in Pediatrics found that teens who use flavored e-cigarettes are more likely to become regular users and vape more heavily.

“Regulations which reduce youth exposure to flavored e-cigarettes may aid in preventing young people who try e-cigarettes from becoming long-term e-cig users,” Leventhal said. “Regulations like these could also encourage the millions of U.S. adolescents who already use e-cigarettes to quit vaping, especially if they can no longer access e-cigs in flavors they like, which according to our study, include both minty and fruity flavors.”

E-cig use jumps 46% among young adults in one year

New research co-led by USC scientists suggests hundreds of thousands of young adults took up vaping between 2017 and 2018.

Experimentation with e-cigarettes could become nicotine addiction for youth who have never used any other tobacco products, USC study suggests.

USC researchers discovered that young adults who had never used e-cigarettes were more likely to start if they recognized the cartoons used in their ads.