YOU NEED TO KNOW

Learn more about being prepared for, surviving and recovering from an earthquake at the Earthquake Country Alliance website.

WORK IN A LAB?

Trojans dove for cover under their desks Thursday but there was no need to worry: It was only a drill. 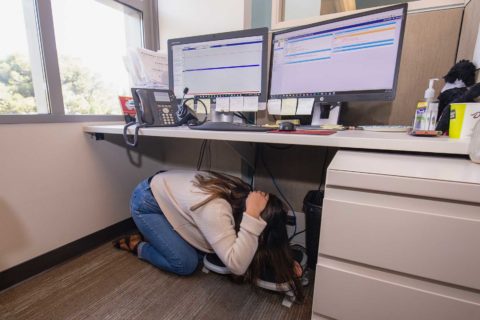 The university once again took part in the annual Great ShakeOut earthquake drill, the largest disaster drill in U.S. history. At USC, officer workers, faculty and students dropped for cover at 10:17 a.m., while employees of the Engemann Student Health Center conducted a mass casualty exercise to be better prepared for the real thing.

Nearly 11 million people statewide and nearly 66 million people worldwide took part in Thursday’s drill. The Great ShakeOut exercises are coordinated globally by the USC-based Southern California Earthquake Center; the university has taken part in the drill since it began in 2008.

FACEBOOK LIVE: Earthquake experts John Vidale, former director of the Southern California Earthquake Center, and Steve Goldfarb, USC fire safety and emergency planning specialist, speak on earthquakes, the research behind them and how we might better prepare.

You didn’t feel that earthquake? Good, because it was just a drill

USC students, faculty and staff are among the 10 million Californians who took part in the Great ShakeOut.

The Southern California Earthquake Center at USC hosts the eight-week program, in which participants get real-world experience — and do real research, too.