This week, as USC celebrates the inauguration of Carol L. Folt as the university’s 12th president, two symposiums are taking place Wednesday and Thursday with TED-Talk-style presentations highlighting innovative work from USC faculty.

With nearly $900 million in research expenditures in the last fiscal year, USC pursues new innovations, discoveries and solutions to the world’s most vexing problems. USC’s not-so-secret sauce is a strategy that emphasizes collaboration across multiple disciplines and meeting societal needs. 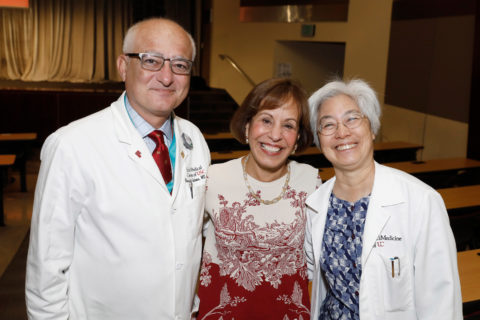 The researchers presenting their work this week showcase the university’s interdisciplinary approach to preventing and curing diseases, exploring more sustainable practices to combat climate change and enhancing communication and understanding across cultures. Their diverse fields of study represent many of the nearly two dozen individual schools and centers at USC.

With a focus on the themes of discovery, creativity and innovation, USC faculty demonstrate the scholarly contributions of a top-tier research university whose focus is serving the global public good. These are just a few of the presenters during this historic week of inauguration festivities. The full list can be found on the inauguration website.

Antonio Bento doesn’t mince words about the threat of climate change: “If we don’t do anything about climate change and temperatures continue to rise, the quality of life in our region would quickly deteriorate from poor air quality, wildfires and drought.” But then the director of the nascent USC Center for Sustainability Solutions pivots to a more hopeful message: “Our region is the leader in the country to solve these problems, and this is where USC comes in. We have a lot of credibility in this area and USC should become the center of research.”

Bento is presenting at the symposium this week — along with the center’s co-director, professor of electrical and computer engineering Mahta Moghaddam — about their vision: positioning USC as both a hub and the preeminent partner for international agencies, governments, corporations and non-governmental organizations to develop solutions to the most pressing urban environmental challenges.

Bento, who is also a professor at the USC Price School of Public Policy, describes how the 2020 presidential election is putting climate and sustainability challenges on the national stage like never before. He points out that while most of the presidential candidates have substantial climate proposals, they haven’t yet touched on how they will pay for them: “I’ve done a lot of work around the design of carbon pricing and fuel economy. We need to frame the problem in a more balanced way.”

The message we’d like to get across is USC is strongly equipped to deal with a lot of these problems and come up with solutions.

Moghaddam plans to present on existing and emerging technologies to scale up rapidly to achieve zero emissions in the next few decades. She describes the technological innovations being developed at the USC Viterbi School of Engineering, including using satellite observations to understand climate-warming trends and make predictions about how to adapt to climate change.

“One example of something we’re tracking is water content in soil, which is one of the most important elements in modeling the global climate because it determines how energy is exchanged between land and atmosphere,” she explained. “If we have a continuous stream of data from soil moisture, we can analyze the global energy budget and understand the cycle of how water, energy and carbon go hand-in-hand.”

Bento’s and Moghaddam’s presentation ends with an announcement: the launch of a sustainability scholars program, part of their “call to action for the entire university,” Bento said.

“The message we’d like to get across is USC is strongly equipped to deal with a lot of these problems and come up with solutions,” said Moghaddam. “My colleagues are studying everything from the buildings of the future to carbon capture and storage. We have such a large and diverse set of schools and faculty — really world-class — to tackle these difficult problems.”

Unlocking the secrets of a healthy life

While some people wish they could live forever, Sean Curran says that people who have ailments associated with old age — including his own grandmother — may disagree.

The associate professor of gerontology at the USC Leonard Davis School of Gerontology is presenting on his work to optimize lifestyle, with the goal of finding how people can have a longer “health span” within their lifespan. “The amount of time you spend healthy during your lifespan averages 63 years, so there’s a significant percentage of your life where you’re still alive but not in optimal health,” he explained.

Researchers estimate 25% of the factors that are relevant for lifespan are genetic, while all the rest are environmental factors such as one’s surroundings, diet, and access to healthcare and other resources. To discover what yields optimal health, Curran and his team conduct gene-environment studies with nematodes, a worm that’s an especially useful model for studying human diseases.

We’re in an era where research is collaborative and the potential for interaction and synergy between different groups accelerates the research we do.

“What drew me to USC ten years ago was this model that is exemplified at the USC Leonard Davis School, where there are experts in a variety of disciplines — including cognitive science, psychology, demography and sociology — and the amount of connectivity between different groups is unlike anything I’ve ever seen,” Curran said.

“Aging is perhaps the most complex system to be studied,” he added. “We’re in an era where research is collaborative and the potential for interaction and synergy between different groups accelerates the research we do.”

Paulina Oliva is looking for evidence that people are on the move in response to air pollution.

The associate professor of economics at the USC Dornsife College of Letters, Arts and Sciences says there’s ample anecdotal evidence that people are changing locations because air pollution is too much to bear. “But, it’s not easy to find causal evidence,” she explained. The challenge is that air pollution frequently increases along with economic activity: “If you just look at areas with more pollution, these are usually the same areas that have more economic activity, which tends to attract people more than expel people from an area.”

Oliva is presenting on her research into migration due to air pollution in China, which takes advantage of a natural experiment — a source of random variation in air pollution. In this case, the source of that variation is from a weather phenomenon called thermal inversions, which occurs off and on and tends to concentrate pollution near the ground. Using these data, Oliva and her colleagues can piece out which part of the population movement comes from air pollution versus other reasons. Their findings suggest that air pollution is responsible for large changes in inflows and outflows of migration in China.

Oliva points to prior research that indicates that some groups are more knowledgeable about air pollution, such as college-educated people, or vulnerable to its effects, such as women of child-bearing age, are migrating in response to air pollution. The latter phenomenon may indicate women’s concerns about the risks of poor air quality during pregnancy and on young children.

“In general, the ability to respond to environmental threats like pollution or climate change comes easier to people that are wealthier and have higher education,” Oliva explained, noting this inequity is a challenge that requires more study.

Allissa Richardson is an assistant professor of communication and journalism at the USC Annenberg School for Communication and Journalism. She researches how African Americans and other marginalized communities create their own news networks and produce groundbreaking forms of journalism using mobile and social media, particularly in times of crisis.

“USC is the best place to study journalism and be a journalist,” Richardson said. “It has supported my research agenda where other schools might be nervous and the academic freedom it affords is unmatched. It’s a world-class institution that’s not afraid to study difficult challenges; it’s always looking for ways to become the solution to real-world problems.”

The spirit of our university is that we’re always fighting on, so we should tell students about their rights to bear witness.

Richardson’s presentation shares the same name as her forthcoming book, Bearing Witness While Black: African Americans, Smartphones and the New Protest #Journalism. She explores the lives of mobile journalist-activists who documented the “Black Lives Matter” movement using their smartphones and Twitter and says they are the latest in a long line of pioneers in the black press who witnessed slavery, Jim Crow and now police brutality.

“The spirit of our university is that we’re always fighting on, so we should tell students about their rights to bear witness. If you see something, don’t look away from it — we can’t distance ourselves and become numb,” Richardson implored.

USC to mark inauguration of President Carol L. Folt with week of activities

Faculty symposiums and a student-focused arts showcase are among the events leading up to Friday’s formal installation ceremony.