As Arthur C. Bartner begins his 50th season leading the Spirit of Troy this Saturday at the Los Angeles Memorial Coliseum, he kicks off a year of celebratory milestones.

The 2019 college football season will see …

This football season is already a momentous one for the Trojan Marching Band, as it will be led by a female drum major for the first time. India Anderson — a junior majoring in music performance at the USC Thornton School of Music — was voted by her peers to wield the sword in April. 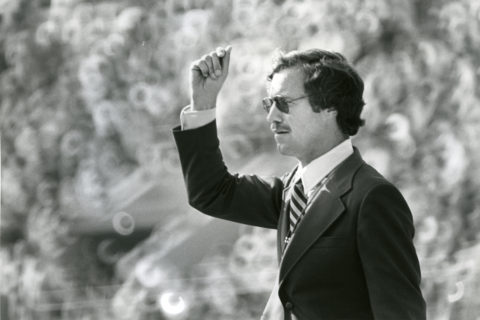 In mid-September, the band is slated to release the 17th album of Bartner’s tenure. Called The Gold Standards, it features pop hits, fight songs and patriotic hymns of the last 50 years. The gold vinyl album will be packaged with a digital download of all 34 tracks and a full-color oversized booklet covering memorable moments of Bartner’s career. The album will be available at USC Bookstores (and USC Bookstores online).

A gala dinner and concert planned for May 2, 2020 also will celebrate Bartner. The show will encapsulate five decades of his career, with live entertainment, video elements and special guests, including The Spirit of Troy as the house band for the event.

The upcoming concert, “The Final Curtain,” will bring back some of Bartner’s favorite acts to accompany the band.