The newest Trojans got their first introduction to the pomp and circumstance that awaits them as they experienced USC’s new student convocation on Thursday morning.

The sun broke through the clouds just after the incoming students and faculty members — all wearing academic regalia — marched into Alumni Memorial Park to the music of the Trojan Marching Band. 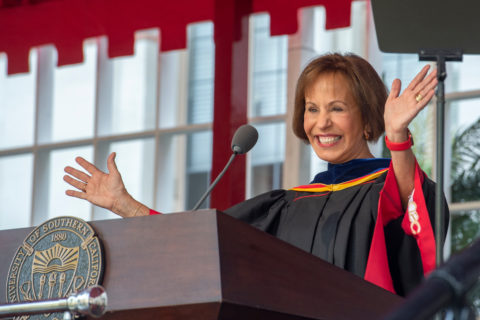 “You are standing at the very edge of your new future,” President Carol L. Folt told some 3,000 new students as well as their family, friends and at least a few household pets who gathered for the formal ceremony.

Folt noted that she, like the students, has recently joined the Trojan Family.

“Today we begin our USC journey together,” Folt said. “I, too, am new as president. You’re my very first entering class and you will always be very special to me.”

Folt — on only her 53rd day as USC president — explained how she immersed herself in USC history after being named the university’s 12th president. She shared stories of notable Trojans, from the school’s first valedictorian, Minnie Miltimore — the lone woman in the three-person Class of 1884 — to Neil Armstrong, the first person on the moon. And she imparted lessons she learned as she prepared to take the helm at USC.

“You are now a member of the Trojan Family,” she said, “and Trojans share a passion for USC that is legendary.”

Folt noted the diversity of the incoming class: Two-thirds of the incoming students are people of color, including 900 underrepresented minority students, a USC record. They’re smart, too, with an average high school GPA of 3.75.

She encouraged them to take chances but reminded them they’ll have to work hard, quoting alumna Shonda Rimes: “Dreams don’t come true just because you dream them.”

And she noted that the next time these students are in Alumni Park again dressed in academic robes, it will be for their commencement.

New student convocation: “We are all family now” 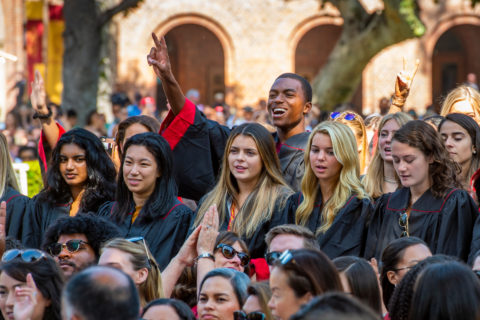 “Each of us adds something totally unique to this campus,” Stone said, while Parral explained that “the more time I spent on campus, the more I felt I belonged.”

After each of the university’s deans welcomed their groups of incoming students, Folt wrapped up the ceremony by thanking the staff and student leaders who had worked all summer to prepare for the new students’ arrival. And she thanked the students themselves for choosing USC.

“The future looks bright because you will be the ones who will create it,” she said.

With the singing of the alma mater, the students headed off into their new lives as Trojan scholars. And while convocation is a rite of passage for the new Trojans, it’s also a beginning for families who will resume their lives without their now-college-kid around. Professor Moh El-Naggar of the USC Dornsife College of Letters, Arts and Sciences had comforting words for parents with mixed feelings.

“I promise you we will take good care of them,” he said. “We are all family now.”

USC’s campuses are buzzing as students return. Our slideshow gives you an eyewitness view of Wednesday’s Move-in Day happenings on the University Park Campus.

In a USC tradition, parents of incoming freshmen are invited to spend part of Move-in Day penning emotional letters to the children they’re about to leave in Los Angeles.

From the best food and hangout spots to game day traditions, this overview of campus life will help incoming freshmen become USC experts.