If you’re looking to shed a few pounds, you might be tempted to try out popular new approaches like the keto diet or fasting.

But you might be unwittingly worsening a problem you don’t even know you have: a fatty liver.

Doctors are worried about an increasingly common condition called nonalcoholic fatty liver disease, or NAFLD, in which extra fat builds up in the liver. It may lead to serious consequences like cirrhosis and liver cancer — just like liver problems caused by drinking too much alcohol.

“In clinic, I used to see mostly hepatitis C patients. Now most of the patients I see have fatty liver disease,” said Hugo Rosen, a liver disease specialist and chair of medicine at the Keck School of Medicine of USC. “It’s a problem that closely tracks with the emergence of obesity and diabetes throughout the world.”

A quarter of the global population is estimated to have NAFLD — which doctors pronounce as “nah-fold” or “naffle-dee.” Rosen said that figure may be even higher in the United States. The liver disease affects about 35% of Americans.

“It’s a really important issue to be aware of,” he said. “Patients with NAFLD have at least a twofold risk of dying of a coronary event or having a stroke.”

Scientists also believe the condition is linked to increased risk of liver cancer even in the absence of clear-cut cirrhosis, Rosen said. He has seen preliminary results from a Mayo Clinic study that suggest NAFLD can increase susceptibility to other forms of cancer as well.

Many people don’t know they have a fatty liver, leading to its reputation as a “silent killer.” It usually causes no pain or other symptoms. It’s often not until the disease has progressed to a more serious stage, like nonalcoholic steatohepatitis (NASH) or cirrhosis (serious scarring of the liver), that patients and doctors are alerted to the problem. 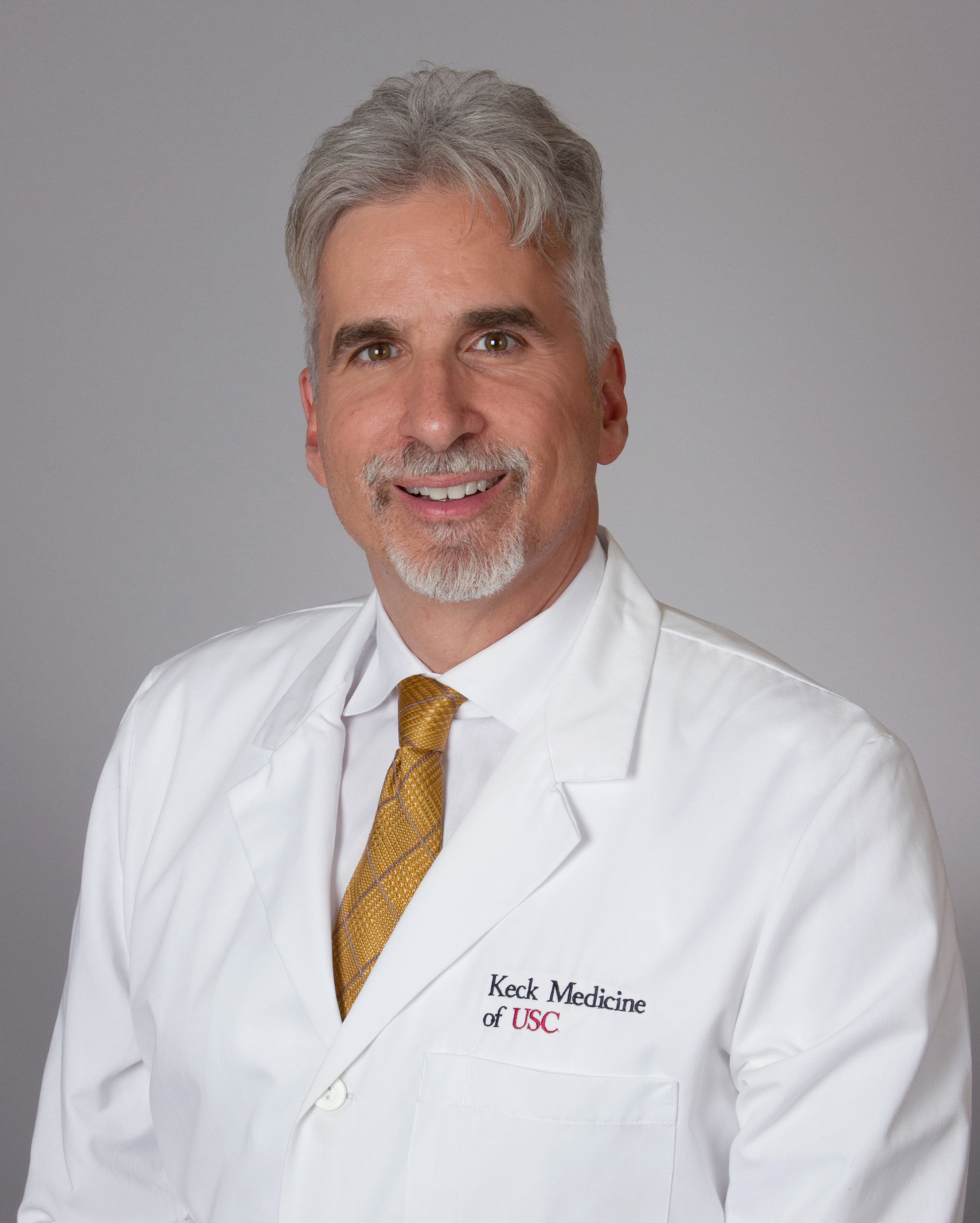 Hugo Rosen, a liver disease specialist at the Keck School of Medicine of USC, has seen an increase in the proportion of patients with fatty liver disease. (USC Photo/Ricardo Carrasco III).

In NASH, the liver becomes inflamed and damaged, which can cause scarring and higher risk of cancer or liver failure. Rosen said patients worried about NALFD or NASH should request liver blood tests and imaging tests like an MRI or ultrasound. Concerning results could indicate the need for referral to a liver specialist and a liver biopsy.

Vitamin E and the diabetes drug pioglitazone have helped some patients, but results are inconsistent, he said. The FDA has approved no drugs for the disease yet. Rosen said losing weight is the main strategy to combat the problem, because it helps reduce fat and inflammation in the liver.

That’s why poor eating habits and fad diets that boost fat intake are particularly worrisome, he said. The keto diet, which emphasizes eating lots of fats and restricting carbohydrates, can lead to NAFLD, according to research done in mouse models.

Keto is attractive to many people because “you can eat a lot of tasty stuff — butter, red meat, cheese,” he said. “But you’re basically consuming 80% of your caloric intake from fat. It certainly makes sense why, in rodents, we’re seeing that this causes NAFLD.”

Don’t overdo it on fats, Rosen recommends, especially from processed foods. Fructose and other sugars are a major concern as well, especially in sodas, candy, sugary cereals, sweetened juices and fast food. Those kinds of refined foods can increase cholesterol and cause inflammation in the liver.

“Some data have shown that a paleo diet has a significant and persistent effect on lowering liver fat compared to a low-fat diet, simply because a low-fat diet isn’t palatable to a lot of people,” he said.

Rapid weight loss is not recommended because it’s rarely sustainable.

That’s one problem with fad diets, Rosen said — they can be difficult to stick with, especially if they cut out tasty items entirely. Fasting is another approach that can have dramatic weight-loss effects but is hard to maintain.

“Rapid weight loss is not recommended because it’s rarely sustainable,” he said. “I would favor a gradual weight loss of 5% to 10%.”

Beyond consulting with a doctor or nutritionist about their dietary habits, Rosen said people with NAFLD or NASH should consider moderate exercise to avoid a condition called sarcopenia, or low muscle mass and strength. When combined with obesity, sarcopenia can further increase the risk of liver inflammation.

Another concern is alcohol. Although by definition, NAFLD is unrelated to alcohol use, people with poor liver health should be careful about how much they drink.

Rosen said even moderate alcohol consumption (10 to 20 grams for women and 10 to 30 grams for men per day) can cause issues, citing a recent study that followed 60,000 Koreans with NAFLD. A typical drink has 10 to 14 grams of alcohol.

“It turns out that if a patient has NAFLD and they drink this moderate amount, they have a much higher rate of developing worsening fibrosis over time,” Rosen said.

USC researchers among those seeking new treatments for NAFLD

Rosen described new treatment approaches and drugs for NAFLD and NASH as “one of the greatest unmet needs in medicine.” The good news is many drugs are in the development pipeline, he said, including several ongoing clinical trials at USC.

“When I see a patient, I always print up the contact info for the study coordinator in their discharge paperwork, just in case they are interested,” he said. “I would strongly urge people who have this disease to come to academic medical centers like USC, because we have access to all these trials.”

He also called on health providers to learn more about liver issues like NAFLD. Doctors who see patients who are overweight or obese should consider recommending a screening ultrasound or other methods to determine fat levels in the liver.

“There definitely needs to be enhanced education of primary care providers to think of NAFLD and how frequently it occurs,” Rosen said. “You’re talking about one out of every three patients you see in clinic.”

A genetic mutation may be the crucial link to prevent obesity with high-sugar diets.

A low-calorie fasting-like diet, plus chemotherapy, enables the immune system to recognize and kill skin and breast cancer cells, according to a new USC-led study.

Food as medicine? Scientists are getting closer through nutrigenomics

Nutrigenomics — the nexus of nutrition, genetics and genomics — is still in its infancy, but USC researcher Cary Kreutzer sees vast potential in its ability to help people take control of their health.