What can looking at the brains of transgender people tell us about the physical and mental health resources they might need?

Not very much — yet.

“We aren’t able to use brain scans yet to help tailor hormonal and other treatments,” he said. “But perhaps in the future we will, and that’s one of the reasons I’m so attracted to this research field. The implications are enormous.”

Understanding how their brains develop and change as transgender people grow up could help doctors and other health professionals provide better treatment and support.

“We know a lot already about transgender health thanks to endocrinologists, psychologists and other interdisciplinary researchers who do great work,” Vanhoecke said. “As a data scientist and a neuroscientist, I want to contribute from my point of view, to understand what is happening at the brain level.”

Vanhoecke will strive toward that goal through a unique research network based at USC. It’s known as ENIGMA, a global collaboration of scientists specializing in brain research on issues ranging from schizophrenia and depression to HIV and addiction.

For the first time, the field is really galvanized around studying this issue together.

The network has led ground-breaking research since 2009, including a detailed analysis of how bipolar disorder affects the brain and a major study into schizophrenia’s disruptive effects on communication among different areas of the brain. ENIGMA features more than a thousand researchers across dozens of countries, including more than 100 brain scientists and other experts at USC.

Vanhoecke will be working with its transgender research group, which was established only two years ago.

“For the first time, the field is really galvanized around studying this issue together,” said Paul Thompson, a USC professor, associate director of the USC Stevens Neuroimaging and Informatics Institute and leader of the ENIGMA network. “The better we are able to understand sources of stress and individual differences in transgender people, the better we are able to be sensitive and understand their different needs and experiences.”

ENIGMA’s strength lies in its collaborative nature, pooling tens of thousands of brain scans from researchers across the world. Scientists have access to much more data than they could collect on their own. That’s particularly important for research involving transgender populations, which tend to be difficult to recruit in large numbers.

Compiling results from researchers who are starting to explore brain structure and gender will be critical to identifying any noticeable differences between cisgender and transgender participants. That knowledge could shed light on transgender identity and related changes in the brain throughout life, Thompson said.

“If there are any mental health risks that are prevalent in transgender people, when do they emerge?” he said. “Are there any approaches for intervention that would be particularly well-suited or not?”

It’s not always true that your brain structure matches your gender identity, or vice versa. There is no clear consensus in the field.

So far, results from the few existing studies are inconclusive, Vanhoecke said. Some evidence suggests differences in gender identity could be linked to ways the brain develops in childhood and adolescence, and that the observed patterns correspond to gender identity. Other studies have indicated that neural patterns generally match the sex a person is assigned at birth. Yet other studies found evidence that doesn’t seem to support either of these, but rather that there are unique neural patterns in transgender people.

“It’s a very mixed story,” he said. “It’s not always true that your brain structure matches your gender identity, or vice versa. There is no clear consensus in the field.”

Part of the challenge is the wide variety in brain structure across people in general. Researchers have found some differences between the brains of cisgender men and women, for example, yet the variation within each sex is also considerable.

Vanhoecke aims to study systems of the brain, including a part of the brain’s white matter that might be involved in differences between sex assigned at birth and gender identity. It’s called the inferior fronto-occipital fasciculus, a bundle of white brain fibers that runs along the lower portion of the brain between the occipital and frontal lobes. Analyzing its structure in greater detail might offer clues about its role in gender identity and guide future studies, he said.

Vanhoecke also hopes to build on research being done at UCLA, where he currently interns in the lab of Jamie Feusner. One of the studies they conducted, in collaboration with Ivanka Savic at the Karolinska Institute in Sweden, explored how people responded to images of their body that had been morphed to appear more stereotypically feminine or masculine. Results suggest that transgender people more strongly identified with depictions of their body that had been changed to match their gender identity. Further, they identified most highly with morphed versions of their bodies that were not strongly masculine or feminine in appearance.

Vanhoecke is hopeful that his work will one day lead to better understanding of the gender spectrum, including how people with different gender identities develop throughout adolescence and what kind of support they might need to feel comfortable in their own skin.

“Research has tended to ignore that ambiguous area, which is reflected in nonbinary or gender nonconforming populations,” Vanhoecke said. “This idea of binary health care, that you’re either male or female, it’s only in the last few years that researchers are starting to say that’s just not true.”

Vanhoecke also wants to be careful about how his work is used, given the historical mistreatment of transgender people and relatively recent progress in societal acceptance. Part of that involves building relationships with people in the transgender community to ensure he understands their needs and desires and how this research might be viewed by others. 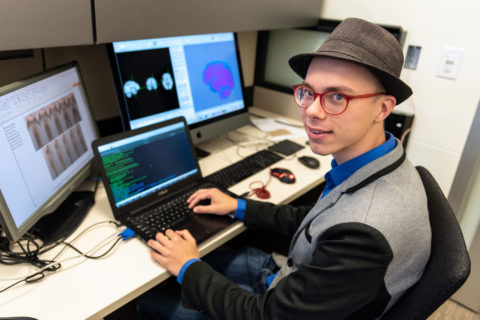 Vanhoecke has weighed the social and ethical implications of his research ever since becoming interested in the topic as an undergraduate student in Belgium. (USC Photo/Eric Lindberg)

“Research can always be used for beautiful purposes or misused,” he said. “That’s something we should be aware of. I shouldn’t just be sitting in my dark lab, in my dark corner of some building doing data analysis, but instead, I should be always thinking about the social and ethical implications.”

Vanhoecke’s path to becoming a neuroscientist interested in transgender issues began as an undergraduate at Ghent University in his native Belgium. While earning a degree in biochemistry and biotechnology, he also enrolled in an honors program that let him take courses in diverse areas, from politics and economics to psychology and philosophy.

He went on to earn a dual master’s degree in brain and mind sciences at University College London and Pierre and Marie Curie University in Paris. During that program, he helped with research on neurodegenerative conditions like dementia and Parkinson’s disease, but felt the work was missing something crucial. He wanted to do research that included a social justice component.

“I was extremely thrilled when I started to read about transgender research,” he said. “This is a project I could see having clinical health benefits, but also some political, social and ethical benefits.”

He received a grant from Vocatio, a nonprofit foundation in Belgium, to help him begin conducting research on neuroimaging and transgender identity. Then Vanhoecke came to USC in 2018 on a fellowship from the Belgian American Education Foundation. He was drawn to its unique master’s program in neuroimaging and informatics, which gives students a thorough understanding of brain anatomy and functioning, brain scanning technology and computer processing approaches. He said the university provided the ideal environment to strengthen his abilities.

“I like to be intellectually challenged, and I found that here at USC, people had a lot of questions for me,” he said. “It has boosted a lot of my research skills.”

When Mellissa Linton heard about the Queer and Ally Student Assembly during her freshman year at USC, she had no idea of the impact it would have on her life.