“We moved several times,” she said. “My dad was a lieutenant commander in the Navy, and I was born in West Virginia. We lived in Tucson, Ariz., then went to New Orleans just in time for Hurricane Katrina. After the storm, my dad started looking for new adventures, which led us to spending 12 years in Germany at Ramstein Air Base.”

After spending her formative years living abroad, Daly entered her junior year of high school with dreams of attending college back in the United States. There was just one problem: she had no idea where to begin. “I had never heard of USC,” she said.

That’s when her father discovered the USC Provost’s Pre-College Scholarship for Military Families.

“He encouraged me to apply,” Daly said. “My tuition, room and board were all paid for and sponsored by the USC Provost.”

Through this first-of-its-kind program, a select group of 30 children from military families were chosen this year to receive the scholarship. They also receive university credit. To date, the six-year-old program has supported 146 students.

USC has had a long-standing relationship with the military. Since 1940, the university has partnered with ROTC and offered two master’s degrees related to the military: a master’s in social work with a concentration in military service and a master of business for veterans. This program is one of the myriad ways that USC recruits and educates nontraditional students who are from military families or are veterans themselves.

I took away a wonderful group of friends, a familiarity with the school and the confidence that I could make it as a college student.

“In this program, USC faculty members teach four-week, three-credit courses in a single discipline with wide-ranging options — including architecture, engineering, performing arts and pre-health,” said Anthony Bailey, vice president for global and strategic initiatives and founding dean of USC Bovard College, who oversees USC Summer Programs. “Being able to live in the dorms, take a college class and experience college life while still in high school is positive preparation for college and what lies ahead.”

Within a few weeks, Daly received the good news that she was accepted into the program’s first cohort.

“I was overjoyed. My parents were so proud of me, but mostly I was excited to spend a summer in Los Angeles. I was pretty sure that I’d be a movie star by the end,” she said with a laugh.

But what seemed like a far-fetched dream soon became a reality as she explored her interests during the monthlong program on the USC campus.

“In so many ways, it shifted the path of my life,” Daly said. “I took away a wonderful group of friends, a familiarity with the school and the confidence that I could make it as a college student.”

Her hard work and participation paid off when she decided to apply to the USC School of Dramatic Arts.

“Because I was in the theater department, I worked with the same professors who then came to audition me in New York,” she said. “They had already seen my body of work. They saw my work ethic and how much I was committed, and that’s why I got into USC. I’m so lucky I had that opportunity because of the scholarship.” 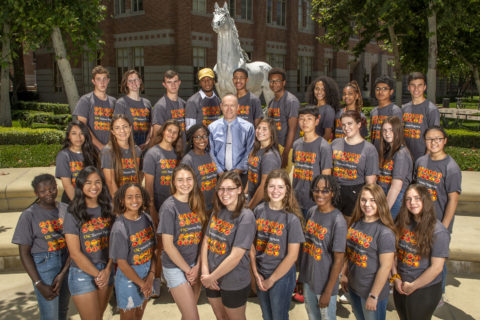 Daly graduated in May with a bachelor’s degree in theater. Almost one month to the day after graduating, she is back on campus serving as a resident assistant to this summer’s new crop of students attending the USC Summer Programs.

She is making a special effort to reach out to the recipients of the Provost’s Pre-College Scholarship for Military Families. “I know where these kids are coming from,” she said. In addition, she knows firsthand what these high school students could potentially offer to the future USC student body.

“Military kids are an asset to any community: They are strong, motivated, disciplined and educated young people,” Daly said. “They enhance a student body with their wide perspectives, their creativity and their flexibility. They bring life experiences to the table that are well beyond their years.”

Saying thank you through higher education

One of those students is 17-year-old Angelie Riveria. Her father is a chief warrant officer in the Marine Corps stationed at Camp Pendleton in Oceanside, Calif.

Angie, as she is known, is excited to be spending the summer at USC as one of the recipients of the Provost’s Pre-College Scholarship for Military Families. Like Audrey, Angie never imagined getting this opportunity but for very different reasons. 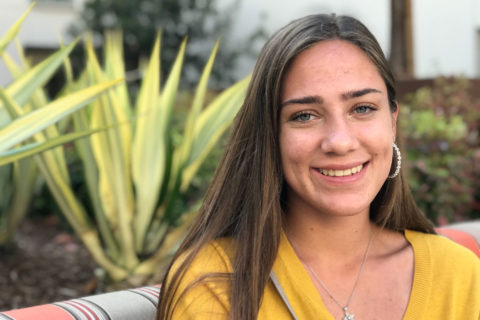 Before her heart surgery, Angelie Riveria had planned on joining the military, but now is thinking instead about going to college where she would be a first-gen student. (USC Photo/Ron Mackovich)

“I recently underwent heart surgery, and I’m adjusting to life as a teenager with a pacemaker,” Riveria said. She suffers from a heart condition connected to the malfunction of the sinus node, causing abnormal heartbeats.

“It was actually a dream of mine to serve like my dad, but because of my pacemaker I would not be eligible,” she said.

With her military dreams dashed, Riveria is even more thankful for this scholarship because it could lead to a new dream, one that includes higher education.

“It is important to remember that all children of military families have served and sacrificed in their own way for the sake of liberty and democracy,” said Mark Todd, vice provost for academic operations at USC. “They have faced many unique challenges in their lives, including multiple moves, parents who miss important milestones due to deployment and changing schools more often than most. There is a cost to all of this, but it also builds resilience. Our program is greatly enriched by their presence.”

“Many of these high school students will be first-generation college-goers, and having a positive experience at a place like USC will help them aspire to apply to universities that they may not have reached for otherwise,” he continued. “Providing this scholarship opportunity for them is our way of saying thank you.”

The scholarship program could keep Riveria connected to the military through a degree in political science or international relations, two degrees she is considering.

“I am interested so much in war and peace,” she said. “I want to be aware of the struggles that go on in this world.”

While she tries to figure out her future, Riveria said she is grateful for the opportunity to be here.

“This is a once-in-a-lifetime opportunity, and it will teach you so many things about yourself, school and life in general,” she said. “Most kids in military families don’t have the money or experience with college to get into a big school like this. I think this experience will help solidify my confidence in the path I choose for my future.”

When asked what she would tell other high school students from military families about the Provost’s Pre-College Scholarship, Riveria was quick with a response. “I would tell them to go for it,” she said with a big smile. “And keep telling yourself that you are good enough.”

If Riveria decides to attend a four-year higher education institution, she would be the first person in her family to do so. Currently, recipients of the Provost’s Pre-College Scholarship for Military Families are attending USC, Northwestern University, Georgetown University, the U.S. Military Academy and the U.S. Naval Academy.

Teens (and More) Get a Taste of the USC College Experience