For students from working-class backgrounds, going to college can feel a bit like taking their shoes off in someone else’s house.

People who always kick off their shoes at home might be tempted to do the same when visiting an acquaintance, said Sarah Townsend, an assistant professor at the USC Marshall School of Business. But if everyone else keeps their footwear on, it can feel awkward and confusing.

“You don’t feel comfortable keeping your shoes on, because that doesn’t feel right to you,” Townsend said. “But at the same time, other people might think it’s weird if you took them off.”

Institutions like colleges and universities operate in much the same way, she said. They have certain cultural norms — a set of shared expectations and ways of behaving. And those norms reflect the values of the middle and upper-middle class, which typically stress independence.

Creating a welcoming culture at USC

One in five freshmen at USC is a first-generation college students, and nearly two thirds of incoming students receive some form of financial aid. To help them feel at home, USC provides a slate of supportive resources.

In contrast, working-class norms embrace interdependence — working together, building relationships and balancing individual desires with the needs of the collective. So when working-class students arrive at college, often living on their own for the first time, it can seem like the rules changed on them without warning.

“It’s this cultural mismatch that has a big effect,” Townsend said. “When working-class students have struggles, they can end up thinking, ‘Oh, I must not belong here,’ as opposed to, ‘Well, I’m having these struggles because of my experiences before coming to school, and I just need different strategies for how to be successful here.’”

Townsend studies that cultural divide in higher education and seeks ways to combat it. And she has discovered that simple changes by university leaders — like using language that reflects an interdependent culture in welcome letters to newly admitted students — can help those with working-class roots adjust to college life.

“It helps people feel like they fit in better, that they belong,” she said. “It also helps them feel this sense of empowerment, that they can succeed at USC or elsewhere, and do things in the way they want to do them.”

To support working-class students, colleges should value teamwork and interdependence

Townsend recalls her own admission letter from Stanford University, where she earned undergraduate and master’s degrees in psychology. It featured phrases that spoke to an independent worldview, like “Your advisor is your compass, but you set the direction.”

It stood out to the young undergrad, whose mother didn’t attend college and whose father was a first-generation student, meaning neither of his parents had completed a university degree.

So in a later experiment, Townsend worked with longtime collaborator Nicole Stephens from Northwestern University and other colleagues to test whether changing college admission materials to embrace working-class ideals could affect academic performance.

The researchers had students read a welcome letter, then perform tests and mental exercises. They found that working-class students did better when the college was framed as interdependent, using language that emphasized learning as part of a community, connecting with other students and professors and participating in collaborative research.

“It’s about relationships and roles, adjusting to other people and working together, rather than the independent idea of paving your own path,” Townsend said.

Another effective way to boost performance among low-income and first-generation students involves helping them visualize a successful career. In an experiment, Townsend and her colleagues asked students to think about either their past or their future. Then participants role-played asking a professor for help during a one-on-one meeting and completed an academic test.

Women from low-income backgrounds who envisioned success in their future were more confident during their mock interaction with the professor. They also attempted to answer more questions on the difficult timed test, leading to better performance. 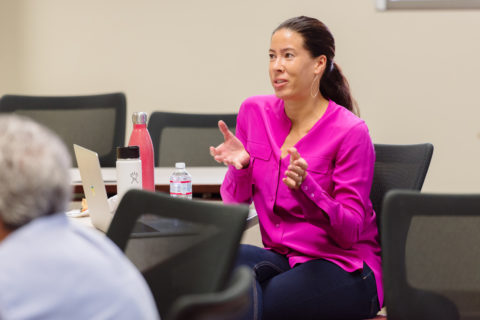 Sarah Townsend studies the cultural divide caused by socioeconomic differences among students in higher education and seeks ways to combat it. (Photo/Chris Flynn)

“Certain students may benefit from strategies that remind them to visualize their successful futures prior to any difficult and important task that they might otherwise be likely to avoid,” the researchers wrote in a paper describing the project.

In a similar vein, showing college students that their peers have achieved success despite facing challenges can increase confidence about their own future. In another experiment, working-class students read stories written by juniors or seniors from similar backgrounds who had struggled when they first came to college. The stories described how they overcame those obstacles by developing new strategies, like asking an academic advisor for guidance.

The researchers then followed the study participants through their first two years of college. They earned higher grades than students who didn’t read about their peers finding success. Townsend believes that hearing those personal stories had boosted their confidence and encouraged them to seek resources that would help them prosper.

“It helped them see these aren’t idiosyncratic experiences,” she said. “There are other people here who have been in the same boat and have learned to figure things out.”

Creating an inclusive culture helps ensure all students can succeed

Through her Culture, Diversity, and Psychophysiology Lab at USC Marshall, Townsend is continuing her exploration of the cultural divide in higher education, including the effects of race and ethnicity. She is hopeful that her research results will encourage more college leaders to consider strategies that reduce the achievement gap between working-class students and those from more advantaged backgrounds.

And she emphasized that universities don’t have to choose between independent or interdependent approaches. They can value and embrace both sets of cultural norms without sacrificing the effectiveness of their message or making one group feel unwelcome.

“That’s certainly an easy route to having what I would call inclusive cultural norms, where you can clearly be successful in a lot of different ways,” she said. “Then everyone could feel comfortable and that they belong.”

Spring admits have new resource to ease their worries about adjusting to college: their peers

USC tackles ‘loneliness epidemic’ in a world of social media

Feeling alone at college, especially as a freshman, is nothing new. But in an era of Facebook friends and Instagram followers, Trojans consider: How do you encourage real friendships?

Peer support group started by students for students lifts those who want a conversation with someone their own age.

By asking players to revitalize a dying Earth, this video game aims to raise environmental awareness