Ariella Glodowski could see on her X-rays that she had small caries lesions forming — even though they weren’t large, painful or even visible to the naked eye. The early detection gave the then-third-year dental student an opportunity to experience firsthand a minimally invasive dental procedure called resin infiltration, where early caries lesions are infused with resin rather than drilled and filled.

In December, she had the procedure, which she noted was nearly pain free. “It was like a normal procedure except there was no drilling involved,” she said. “It was relaxing, to some extent, because there were no sharp objects involved, just some pressure.”

She was also relieved to know that she wasn’t losing any tooth structure to the drill. Often, when dentists complete traditional dental restorations they can end up removing healthy tooth tissue, which can result in more damage over time.

Resin infiltration is part of a growing trend in microdentistry, also known as minimally invasive dentistry, said Jin-Ho Phark, an associate professor of clinical dentistry at the Herman Ostrow School of Dentistry of USC and the dentist who performed Glodowski’s procedure.

“Patients tend to associate dentists with drilling, and they don’t like that,” he said. Plus, every time dentists complete a restoration, they have to drill away a little more of each tooth. Over time and multiple procedures, there is less and less healthy tooth structure to work with. “So,” he said, “we have been trying for a while to reduce the amount of drilling while still taking care of the disease.”

Caries and tooth decay can take a long time to develop. There might be many years before a patient feels any pain or physical evidence of a cavity due to caries, Phark explained. The trick to minimally invasive dentistry is to catch the decay before it becomes a big problem and stop it in the early stages.

“In the past, the standard was to wait until the lesion was big enough to be worthy to be drilled into,” Phark said. “With the new technique, we can stop the cavity early on and prevent it from breaking down and needing a filling at a later time.” 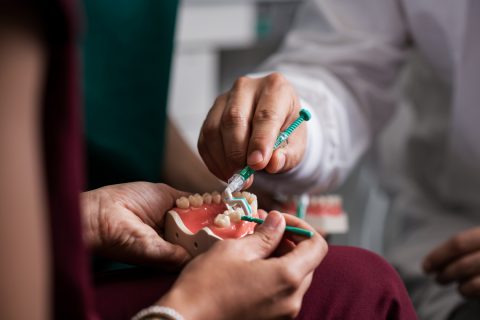 Phark shows students how to gently separate the teeth to prepare them for the application of resin. (Photo/Hannah Benet)

A dentist can use a special liquid resin to infuse into the lesions, which are porous. “We fill those pores with this resin,” Phark said. “It acts, in a way, like a sealant, and it’s a very preventive measure.”

Dentists have been using sealants to cover the grooves on chewing surfaces, and now they are using them to close up lesions developing between teeth. They apply the resin onto the tooth’s surface, and a network of pores within the enamel force the resin deep into the tooth. “After that, we harden the resin with a blue light,” he said.

In situations where the caries lesion has already progressed further and turned into a visible cavity, another minimally invasive dentistry technique gaining in popularity is the use of silver diamine fluoride. Though used internationally for years to stop caries progression, it has only recently been approved by the U.S. Food and Drug Administration for use in tooth sensitivity.

In its off-label usage, the antimicrobial, remineralizing compound is painted onto a tooth’s surface where cavitated lesions are visible, effectively halting any further caries cavitation. The method has been widely used in children or patients who might have a fear of the drill, Phark said. One negative side effect is that the compound can leave teeth blackened at the application site, which is why it has been widely adopted for children’s primary teeth, where it is only a temporary problem.

First in the nation? USC

USC is the first school to teach minimally invasive dental techniques on a large scale, already starting on the pre-clinical level. So far, these techniques have been offered only to patients in special clinics or advanced programs, such as advanced operative and adhesive dentistry. However, last fall Phark started teaching them to the first-year class in a new module called Cariology and Microdentistry. Once this class enters the clinic, they will be performing this kind of treatment on a regular basis.

Patients are going to be really happy that this is a possibility that works for them, especially if they have phobias about drilling.

Glodowski is excited to experience it firsthand and also to offer more drill-free options to her patients in the future as the technique becomes widely available. “Patients are going to be really happy that this is a possibility that works for them, especially if they have phobias about drilling,” she said. “It offers a more conservative approach, which is what we’re trying to strive for.”

Phark said resin infiltration, resin sealants and silver diamine fluoride shouldn’t be expected to replace good oral hygiene and other healthy habits. Dental teams should start a larger conversation around health, which might even include having a nutritionist as part of the practice. “We are trying to be more and more preventive in the case of tooth decay and fight the causes of this disease, rather than patching up the consequences by drilling and filling,” he said.

The new cariology curriculum is also paired with the implementation of new caries detection methods that use near-infrared, laser fluorescence and even the use of dental microscopes. This will help to detect and monitor such caries lesions more reliably.

The “death spiral of a tooth” 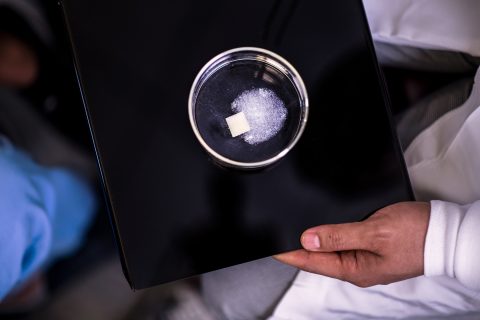 Phark demonstrates resin infiltration using two sugar cubes. The left sugar cube was treated with resin and remains structurally sound even after being submerged in water. The right one meets an expected fate. (Photo/Hannah Benet)

Part of what students learn is how to look at a patient’s history and ask questions to determine their risk of developing cavities. They also are trained to assess if patients have enough saliva, as saliva contains minerals that have a protective function for teeth.

There are very few downsides to the resin infiltration, though Phark said that some people don’t like the rubber dam that dentists have to place over the tooth to make sure there is no saliva and blood getting into the preparation. In addition, after the resin is placed, dentists can’t see it on an X-ray; they can still see the dark spot of the lesion, and they have to compare the size of the lesion to make sure the resin seal is working.

Still, the technique is far better than composite fillings, which last an average of five-to-seven years. “A young patient, a teenager, is going to live another 80 years,” Phark said. “You would replace that multiple times? And every time it gets bigger.”

He calls it the death spiral of a tooth: starting with a small filling, then a bigger filling and eventually a partial crown or a crown. “We are trying to stop this cycle that the tooth is going down from the beginning,” he said. “It’s especially important for adolescents.”

“This is a really exciting innovation,” said Glodowski, whose X-rays show the lesion isn’t growing under the resin. “I hope it will become more widely used in the future.”

Older adults will soon outnumber children, and Trojans’ regular rounds with residents at the Hollenbeck Palms help them understand the complex needs of this growing population.

A collaboration between the university’s physical therapy and dentistry programs leads to more work with less pain.