Coming from rural Ohio, the USC freshman was overwhelmed by the chaotic hustle of Los Angeles. Her fellow Trojans all seemed like they lived glamorous lives: They traveled the globe, landed impressive internships and posted beautiful photos on Instagram and Facebook.

She felt like she didn’t belong, despite her stellar academic record. Maybe it’s because she had to pay her own way in college with help from scholarships, loans and a work-study job. She shied away from opportunities like a competitive scholarship for a study abroad program or leadership positions in student groups.

“There are so many opportunities I’ve probably missed because I thought I wasn’t deserving or the most qualified,” she said.

But with encouragement from friends and mentors at USC, Ross slowly learned to trust her instincts and abilities. Looking back after graduating last week from the USC Dornsife College of Letters, Arts and Sciences, she can see how her hard work has paid off.

I want to increase access for students, make resources available and help them feel comfortable and empowered to take on challenges.

She climbed the ranks to become co-director of Troy Camp, overseeing the popular student-run philanthropy that mentors kids from the neighborhoods around USC. She earned Renaissance Scholar honors by studying cognitive science with minors in Spanish and teaching English to speakers of other languages. And she became a member of Phi Beta Kappa, the nation’s oldest honor society.

Most importantly, Ross has seen her confidence grow with each obstacle she bested. She doesn’t feel like an imposter anymore — and she doesn’t want anyone else to either.

“That’s something I feel very strongly about now,” she said. “I want to increase access for students, make resources available and help them feel comfortable and empowered to take on challenges.”

When people ask, Ross usually tells them she’s from Cincinnati. But honestly, she said, “I grew up literally in the middle of a cornfield on a small farm.”

Her parents lived modestly on the family’s rural plot. Mom worked from home as a customer service rep for an insurance company; Dad worked as a custodian at a small university. Ross traveled to school in Clarksville, where she excelled and became a National Merit Scholarship semifinalist. She was planning to stay near home for college until her older sister encouraged her to apply out of state.

Graduating senior Marla Ross found plenty of opportunities at USC to escape into nature. Here are a few of her recommendations for adventurous Trojans:

Ross worried that she couldn’t afford the cost. Then she heard about the QuestBridge program. The nonprofit initiative helps highly talented low-income students apply to prestigious colleges. For any QuestBridge scholar they admit, the universities provide generous financial aid.

Ross was admitted to USC. Her tuition would be covered, and she could secure loans and outside scholarships to help with living expenses. She excitedly accepted the offer, then readied herself for the transition from the wide-open farmland of Ohio to a bustling metropolis.

Still, the fast pace of L.A. life was jarring.

“There’s this constant need to be looking for the next best thing, presenting yourself as high achieving, securing that really awesome internship,” she said. “And there was imposter syndrome, for sure. I felt that I was not suited, I did not belong here, I was not as capable as my peers.”

USC grad found home away from home in Troy Camp

Ross found her lifeline in Troy Camp. She had worked with a similar outdoors program in Ohio, mentoring kids with health issues or living in foster care, and she stays in touch with many of those campers. Troy Camp also builds long-term relationships, so it was a perfect fit. “That was something I’ve always treasured and has been so relevant in my life.”

Ross’s thoughtful and selfless attitude stood out right away to Molly Bamberger, Troy Camp’s other co-director, when the two met as freshmen camp counselors.

“Marla takes the time to get to know a person, to listen to where they are and make sure they feel comfortable opening up to her,” Bamberger said. “She is always patient and makes people feel heard.” 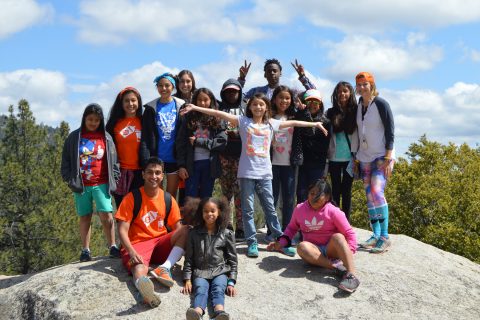 Ross, far right, with members of her Troy Camp cabin at Idyllwild Pines. The 5th-grade campers completed a “dream hike,” discussing their futures and career plans along the way, then shouting their goals from this lookout point. (Photo/Courtesy of Marla Ross)

And as Ross took on more leadership roles in the student organization, she felt her confidence swell. She sees similar changes in her young campers, who conquer their fears by climbing into a wobbly canoe or riding a horse for the first time.

“You get to witness that magic, seeing their confidence transform,” she said. “It opens up the world of possibility to them.”

Ross’s experiences helping students grow and succeed in Troy Camp inspired her to look into academic advising as a potential career path. She also had a formative experience as a sophomore while studying abroad in Chile, where she taught English to high school students.

Beyond helping the students become familiar with a new language, she enjoyed the cultural exchange and opportunity to motivate others to build social connections, access resources and ask for help.

Seize the day — carpe diem — is for sure the mentality to have.

Ross returns to South America this fall as a Fulbright student. Along with teaching English to university students in Bogotá, Colombia, she’ll impart the lessons she learned about making the most of opportunities in both education and life.

“Seize the day — carpe diem — is for sure the mentality to have,” she said. “USC has been formative in encouraging that.”

Ross plans to continue sharing that advice after she finishes her Fulbright, by exploring jobs in student affairs, academic counseling or international exchange programs. She has seen firsthand how one passionate educator or supporter can make a profound difference in a student’s life.

“It’s not these crazy huge impacts, but those small impacts I’ve witnessed,” she said. “Seeing students come out of their shells and grow and become more comfortable with themselves is so cool.”

She could say the same thing about herself.

Canoeing, horseback riding and archery are among the highlights of USC’s popular student-run summer camp. But outdoor adventures are just the start.

As an Afghan refugee who grew up in Pakistan, Omar Azizi understands the refugee experience. That’s why one of his first tasks as a USC graduate will be to launch an app for those in refugee camps.

For the Syrian-born Jamil Samaan, graduating Saturday from the Keck School of Medicine of USC, more Syrian Americans in science means better care within his community.

Grateful for support that made college possible, USC grad pays it forward