When Arthur C. Bartner exits the stage this Sunday at USC’s Bovard Auditorium, it will be for the last time as director of the USC Concert Band. The band’s annual spring concert has been an institution for 37 years and attracted top guest talent to perform with the ensemble, which is composed of students who perform in the Trojan Marching Band during the fall. Over the years, the group has played at venues across Southern California and featured guest artists and conductors such as Patti Austin, Louis Bellson, Monica Mancini, Arturo Sandoval, the Sherman Brothers, Thomas Newman, and Elmer Bernstein. Celebrity emcees have included actors Henry Winkler and Mark Hamill. 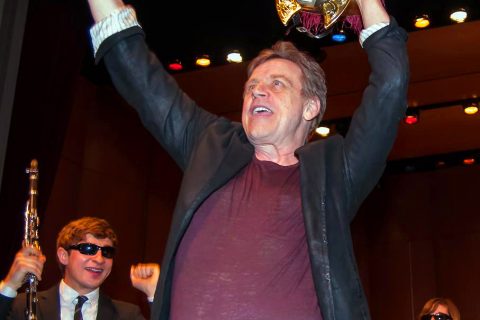 Mark Hamill is made an honorary Trojan at the 2015 spring concert. (Photo/Ben Chua)

This year’s concert, entitled “The Final Curtain,” will bring back some of Bartner’s favorite acts from the past decades to accompany the concert band, including jazz singer Barbara Morrison, operatic tenors Dennis McNeil and Felipe Prado, and jazz clarinetist Sal Lozano. Student performers from the USC School of Dramatic Arts will also perform a selection from the Broadway hit Hamilton.

Alumni of The Spirit of Troy will join in as well. David Washburn, who played trumpet in the Trojan Marching Band in 1970s and is now the principal trumpet of the Los Angeles Chamber Orchestra, will perform the Hummel Trumpet Concerto with the concert band. For the finale, thirty concert band alumni will join the current group to perform Gustav Holst’s “Chaconne” from his First Suite in E♭, a piece that generations of alumni have performed at the inaugural rehearsal each January. Two alumni, Gregg and Sandy Gilboe, will join their son Remy — a first trumpet in the concert band — on stage for the performance.

The concert is dedicated to the memory of Robert W. Jensen, The Spirit of Troy’s official artist who passed away last year. The band will reprise his multimedia presentation from the 2013 concert, in which he photographed an original painting at various stages of its creation and had it come to life ‘in concert’ with Mussorgsky’s “The Great Gate of Kiev.” There will also be an exhibition of his works in the south portico of Bovard Auditorium from 1-6 p.m., which is free and open to the public.

With all the success the USC Concert Band has enjoyed over the past 36 years, many concert-goers this weekend may not realize it nearly went extinct 37 years ago. For decades, it was an ensemble in the USC Thornton School of Music. Although Bartner directed the group during the 1970s, it was comprised solely of music majors and restricted to a traditional band repertoire. After the 1981 school year, the School of Music discontinued the group.

“After I sulked for a whole year, I thought I’d fill the void and re-form the concert band with marching band kids and make it available to non-music majors,” Bartner said. “I wanted to play more contemporary music like Broadway, jazz, and movie soundtracks. And I decided to make it a fundraiser.”

The reorganized USC Concert Band received a huge boost its first year when Dr. Jerry Buss, the late owner of the Lakers, hosted its spring concert at his home in Beverly Hills. The concert was a success and Bartner decided to take the band on the road every year. Throughout the 1980s and early 1990s, the band performed al fresco concerts at local landmarks like Paramount Studios, the Tournament House in Pasadena, the Ronald Reagan and Richard Nixon presidential libraries, and even the Los Angeles Police Academy.

In 1997 the USC Concert Band began a 13-year run at the Cerritos Center for the Performing Arts. The venue gave the band the opportunity to perform indoors in a more classical setting with better acoustics and invite guest stars. For the last decade, the Concert Band has stayed at home with concerts at the on-campus Bovard Auditorium. The concert evolved to incorporate themes such as “A Night at Opera,” “Remembering Mancini,” “Conquest: A Tribute to Alfred Newman,” and “Give My Regards to Broadway,” with companionate guest artists and multimedia elements.

Bartner: “I want to thank the student musicians”

This year’s concert comes at an auspicious time for Bartner and his program. This week the organization’s students voted to elect a female drum major as student leader for the first time in its history. India Anderson, who will wield the sword this fall, will be performing tuba in the concert band on Sunday.

Bartner, who incorporated women into the USC Band for the first time since World War II in 1971, will receive an honorary doctorate at USC’s 136th Commencement on May 10. This will kick-off a year of commemorations for Bartner’s 50th year as director of the organization. “The Golden Legacy” year will culminate in a gala, all-star event on May 2, 2020 on the USC campus.

This Sunday will be the first of many lasts for Bartner. As he faces the “final curtain” as director of the ensemble he resurrected, he looks back with gratitude.

Bartner begins his 45th season as leader of the band