Tingyee Chang arrived as a freshman at USC with a mission: She wanted to help immigrants. Maybe she’d become an immigration attorney, she recalls thinking.

Four years later, as she prepares to graduate as a Discovery, Global and Renaissance Scholar, that same focus on immigrants still drives her. But her career dreams have shifted dramatically, and it was only through a chain of college experiences driven by her curiosity that she found what she was destined to do.

Chang came to USC seeking meaning and purpose, she said, “and USC gave me an opportunity to explore.”

Chang’s parents moved from Taiwan to the United States for graduate school before settling in Sunnyvale, Calif. She grew up surrounded by a mix of cultures.

Tingyee Chang’s research credentials as an undergrad are notable on their own, but she pursued many other passions at USC. Here are a few highlights:

“I see myself in everybody who shares that background, whether they are immigrants themselves or their parents came here,” said Chang, a recipient of USC’s Trustee Scholarship. “These are my people.”

In college, she volunteered at legal aid clinics, helping immigrants fill out legal paperwork to become naturalized citizens. One summer, she assisted “Dreamers,” young migrants brought here as children and now searching for a way to stay in the country legally.

But she began to question whether she could have a broad impact on immigration issues through law. She had serious doubts about her direction by the end of sophomore year.

Around that time, Chang took a class in USC’s interdisciplinary honors program, the Thematic Option. Taught by Paul Lerner, the course explored the evolution of perceptions about mental illness since the Victorian era. It sparked her enthusiasm for mental health. “It changed my life at just the right time,” she said. “It was the coolest class I’ve ever taken.” 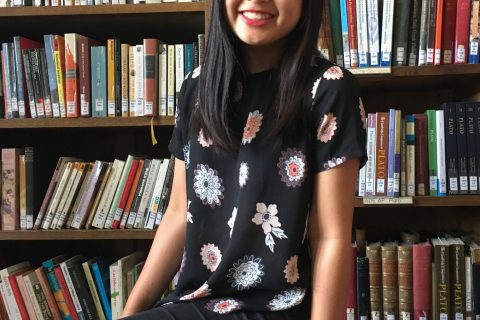 Chang at King’s College Library at the University of Cambridge. (Photo/Courtesy of Tingyee Chang)

Then she went to a study abroad program at the University of Cambridge. As part of her studies, she dove deep into research to write an essay on the history of attention-deficit/hyperactivity disorder and treatment.

“I was sitting in a library by myself at 9 p.m. thinking, hmm, this is a cool document,” she said. “Very few people would agree that is fun, but I enjoyed the experience of finding something new or putting together knowledge in new ways.”

Chang started looking for ways to tie her passion for helping immigrants with her newfound interest in mental well-being. At the same time, the demands of college life caught up with her. She felt burned out.

“I was really tired and kind of sad all the time, and I ended up going to therapy,” she said.

Therapy helped Chang recover. It also spurred her toward studies in mental health.

“In that moment, I saw myself in the research I had been doing,” she said. “This is important stuff, and it’s important for me to do this kind of stuff. I started to see myself as someone who could contribute meaningfully.”

She returned to USC as a junior with renewed energy and clarity. She declared a double major in neuroscience and public policy. And she plunged into the rigorous, detail-oriented research she had relished at Cambridge.

Working alongside Stanley Huey, an associate professor of psychology and American studies and ethnicity, Chang launched a wide-ranging study into treatments for mental health issues like PTSD and intrusive memories among refugees. She combed through hundreds of existing studies trying to understand traumatic experiences linked to immigration. Chang said it could help clinicians figure out the right therapeutic approaches to treat their patients.

Seven months into the project, Chang presented her preliminary findings at the recent USC Undergraduate Symposium for Scholarly and Creative Work. She had analyzed eight studies at that point, but still has dozens more to pore over. Huey said he is impressed by Chang’s determination to acquire the technical knowledge needed to pursue her project, known to researchers as a meta-analysis.

You don’t have to push her. You just provide a little guidance, and she runs with it.

“You don’t have to push her,” Huey said. “You just provide a little guidance, and she runs with it.”

Chang hopes to complete her research by summer and submit the paper for publication. “This has been one of the most rewarding experiences I’ve had at USC,” she said.

Last year, they explored pretrial detention — the practice of keeping accused defendants in jail before criminal trial — among Latinos, immigrants and other noncitizens across United States. Its effects on immigrants are dramatic and can spawn mental health challenges, Chang said.

“This is what life looks like for a lot of immigrants, especially if they are low-income or live in a community that’s heavily policed,” she said. “It’s all about fear and intimidation and punishment.”

As a junior, she also participated in Asian Pacific American Student Services’ CIRCLE program, where she learned about key issues in the Asian Pacific American community. A year later, as a CIRCLE teaching assistant, she held a workshop with fellow student Natasha Arief about mental health in that population, discussing how to address stigma and poor access to treatment.

Chang recently completed her senior thesis, an extensive review of barriers that prevent immigrants from seeking mental health services. She envisions continuing to divide her time between clinical work involving recovery from trauma and policy advocacy related to immigration and refugees. She’ll pursue a master’s degree in neuroscience at the University of Oxford next year.

Although she’s not exactly sure what the future holds, she’s confident it will involve delving deeper into the challenges of immigration and helping people start their lives over in a new place.

And she’s glad that her undergraduate experiences helped channel her ambition and purpose.

“I knew immigrants were a community that I really valued and wanted to work with for the rest of my life,” she said. “USC offered me choices to figure that out.”

Trojans learn of their own families’ historical struggles to come to the U.S.

USC’s Nathan Perl-Rosenthal encourages students to examine the history of U.S. immigration and citizenship policies through their own relatives’ experiences.

Shedding light on the short- and long-term effects of detention, deportation

USC doctoral student Blanca Ramirez researches how families cope when a parent is detained or deported by immigration authorities.

Disadvantaged minorities in the L.A. area show increased behavioral problems, such as depression and substance use.

Research into undocumented child immigrants takes a twist: Their story is her parents’ story

When Stephanie Canizales chose to do her doctoral research on child migrants without parents, she had no idea she was starting out on a remarkable personal journey.