Friends Emily Ellis and Tiffany Renfrow knew one way to stand out from the crowd at the Los Angeles Times Festival of Books at USC: banana hats.

The handmade hats were an ode to the banana peel-wearing protagonist of the children’s book Rumple Buttercup, about a monster who lives in a drain and struggles to fit in. The two were among dozens who waited for hours for a signing with author Matthew Gray Gubler, who is also an actor and director on the CBS show Criminal Minds. 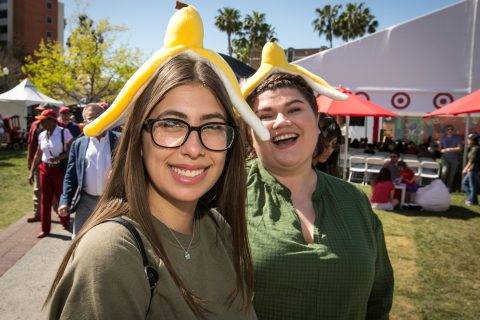 “It’s really nice he’s trying to teach children who read the book that it’s OK to be weird and different,” said Ellis, 21, of Fontana.

2019 L.A. Times Festival of Books: Largest in the country

It was Renfrow’s first time at the festival, now in its 24th year. In its ninth year at USC’s University Park Campus, the festival attracts more than 150,000 people from all over the country, making it the largest literary event of its kind in the U.S. 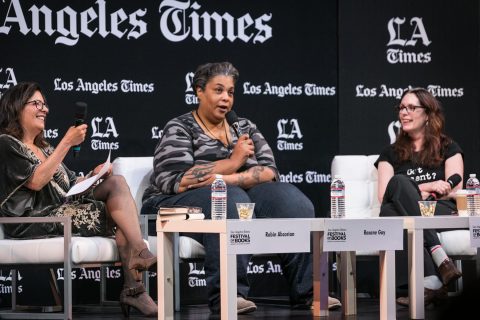 Hundreds filled USC’s Town and Gown ballroom to hear New Yorker writer and author Susan Orlean talk about her latest book The Library Book; it tells the story of the devastating 1986 fire within the downtown Los Angeles Central Library, which burned roughly 400,000 books and shut down the facility for seven years. She told the crowd of over 300 that she never intended to write another book after writing Rin Tin Tin: The Life and Legend until a tour of the central branch.

“It was then, as we were walking the library, when he pulled a book off the shelf and sniffed it and said, ‘You can still smell the smoke in some of them,’ ” she said. “At that point it was an escapable. . .This is just a book I have to do.”

The book is part whodunnit true crime, trying to piece together the alleged arson, part profile of the library as an institution and part feminist history. Likely unknown to many, there was “the great library war” as the 19th century was drawing to a close. Mary Jones, the head of the L.A. library, was asked to resign, with library commissioners contending a man would be better suited to the job. It sparked a protest, with thousands of women marching in the streets of Los Angeles, including activist Susan B. Anthony.

The book emphasizes how important libraries are to communities, including Los Angeles, which a lot of readers in the audience identified with. Sarah Ochoa, of Azusa, liked one passage in particular.

“She’s watching Central Library pack up books to be routed to other libraries and she has a passage where the books are like the lifeblood of the city because they’re going through the arteries [that are] the freeways,” said Ochoa, the first in line to have her book signed by Orlean.

Celebrating L.A. as a book town at the 2019 L.A. Times Festival of Books

The ethos of the festival was all about celebrating Los Angeles as a book town.

Complete information about the festival, including a schedule of the lineup, is available on the Festival of Books’ website.

Now in its ninth year on the USC University Park Campus, the largest literary and cultural festival in the nation is expected to draw more than 150,000 attendees.

The books high school students should be reading, according to USC professors

Sure, everyone reads To Kill a Mockingbird, but faculty members from USC’s Department of English have updated suggestions for today’s teens.

Who says books are archaic?

Californians are omnivorous readers and take in books through both the printed page and handheld screens, according to results of the latest USC Dornsife College of Letters, Arts and Sciences/Los Angeles Times Poll.