Now studying astronautical engineering, Giovanni Flores got his fascination for the Earth’s atmosphere — and what’s beyond it — while sitting in front of the TV.

His dad a mechanic and his mom a housekeeper, he took an L.A. Metro bus to and from school on his own. When he came home, he often played Halo, a military sci-fi game in which soldiers are fighting a civil war set between two rival colonies. But it was the 2014 movie Interstellar, in which astronauts search the universe for a new home for Earth’s residents, that made him think his fascination could be something more.

“I was really curious about astronomy — everything seemed magical almost,” Flores said. 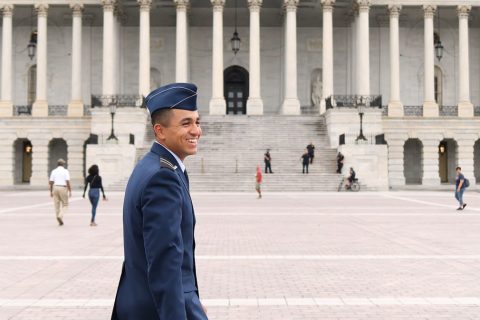 Flores, a sophomore and cadet in USC’s Air Force ROTC program, is training to be an officer while earning his bachelor’s degree from the USC Viterbi School of Engineering. Monday through Thursday he’s focused on his USC classes, but Fridays are devoted to officer training. Those days start around 6 a.m. and go into the late afternoon; the day includes physical training — which he also does midweek — along with aerospace lectures and exercises including drills and marching.

The first few years of ROTC are similar to enlisted basic training, with regular workouts, marching and coursework on Air Force culture and discipline. Between the second and third year, there’s a two-week field training exercise in Alabama, which they must pass to contract with the Air Force. After that, during their junior and senior years, they mirror officer roles in the military, overseeing the curriculum for the lowerclassmen with faculty officers supervising.

USC Air Force ROTC program: As old as the Air Force itself

USC’s Air Force ROTC program started in 1947, the same year the youngest branch of the military was born. Since its start, roughly 2,000 second lieutenants have come out of the program, including familiar faces such as Lt. Gen. Stayce Harris, the branch’s first female black lieutenant general, and the late NFL star and broadcaster Frank Gifford. Its courses are conducted through the Department of Aerospace Studies in the USC Price School of Public Policy. In addition to Trojans, students from other schools can come to campus to be part of the cadet program.

Flores, who is in the first generation in his family to attend college, didn’t know much about ROTC until a second lieutenant from the U.S. Air Force came to his high school, Birmingham Community Charter High School in the San Fernando Valley. She laid out an exciting career path through which he could fulfill his dream of being an engineer but also contribute to the greater good. He also learned about available scholarships.

Flores’ tuition and housing is covered by USC grants, an Air Force scholarship and other federal grants.

“To me, it’s very significant because my family is very low income,” he said.

Growing up, higher education wasn’t discussed a lot. His mom, a native of Mexico, and his father, originally from El Salvador, didn’t study beyond high school.

My parents never said the word ‘college.’ They had no exposure to it.

“My parents never said the word ‘college,’” he said. “They had no exposure to it.”

The possibility of a four-year university didn’t hit him until he got into Birmingham, a charter high school that prioritizes college readiness and offers resources to students from marginalized communities.

He went from not really caring about grades in middle school to being in an accelerated program, where some classes would translate to college credit. Getting into the charter school was all him. Due to gang violence at the high school near his family’s apartment, he and his older brother worked hard on his application.

An introduction to college

The summer after his sophomore year, he was accepted into a college prep workshop at the University of California, Berkeley.

“I had never been on a college campus till I saw Berkeley,” he said.

He learned about the college application process, testing and requirements. Realizing his love of science, he started to think about what he wanted to do.

“I was adamant about going to college,” he said. “I knew I wanted to be an engineer.”

Flores isn’t sure what his career field will be yet. He’s interested in being a pilot, which requires the biggest commitment — roughly a decade — due to the rigors of training. He’s also interested in careers related to flying, like remote pilots who maneuver drones or air battle managers, who are similar to air traffic controllers. He wouldn’t mind working in the proposed U.S. Space Force, whose ultimate functions have previously been handled by the Air Force. And while he might not have time with his hectic schedule, he’d also love to learn more about space enterprise in the Los Angeles area, such as SpaceX and NASA’s Jet Propulsion Laboratory.

“I am absolutely proud to call myself a Trojan, astronautical engineering student, and future Air Force officer,” he said. “I feel as though my whole life is piecing all together, and I am on the right path to achieving everything I have sought for growing up.”

The event recognizes hundreds of USC veterans and their spouses and ROTC cadets and their officers.

Today’s reserve officers in training draw on a long legacy of service.

Trojan Air Force cadet, a first-generation student, has his eyes on the skies