That’s largely due to the efforts of Wolf Gruner, the founding director of USC Shoah Foundation’s Center for Advanced Genocide Research. His quest to build a Holocaust library began as soon as he arrived at USC via Berlin to take a position as a history professor and the Shapell-Guerin Chair in Jewish studies a little over a decade ago. 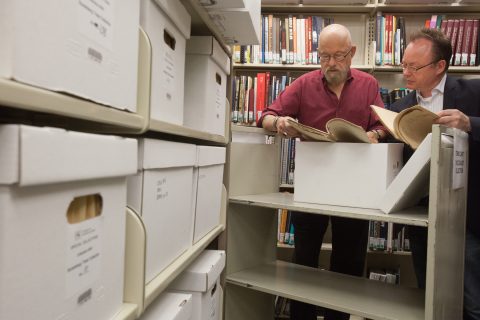 Lynn Sipe, left, who helps maintain the Holocaust and Genocide Studies collection, and Wolf Gruner review materials in the Doheny Library. The collection includes more than 18,000 books and many original materials published during or just after the Holocaust. (Photo/David Strick)

At 18,000 books and counting, the Holocaust and Genocide Studies Collection occupies a room in the basement of Doheny Library. Its size is surpassed only by that of the U.S. Holocaust Memorial Museum, which has been building its library for a quarter century.

“We have rare books from the 1930s and 40s which nobody has, not even the Library of Congress,” said Gruner.

The university hired Gruner among other things to establish a program on Holocaust and genocide studies – at the time when USC classes on the topic were outsourced to nearby Hebrew Union College. (The college, a longtime USC partner, still teaches courses on the Holocaust, anti-Semitism and resistance.)

“I knew I couldn’t bring a Holocaust and genocide studies program to USC if we didn’t really have a good library holding on this topic,” he said.

The effort to compile the library officially began February 2009 – five years before the opening of the Center for Advanced Genocide Research, which will celebrate its five-year anniversary in April. The eclectic cache of primary and secondary resources ranges from books about art or humor during the Holocaust to educational materials for children to large compendiums of photos in the concentration camps to diaries and letters written by Jews trapped in Europe as it fell into chaos.

What’s in the USC Holocaust collection

A sizable chunk of the collection includes original materials published during or just after the Holocaust. The library includes:

• The full original transcripts of the 1946-1948 Nuremberg Trials. This enormous, 300-box collection includes the historic war-crimes trial against Nazi leader Hermann Goering and associates, as well as the 12 subsequent U.S. trials against defendants such as German killings squads, German doctors and the German army. 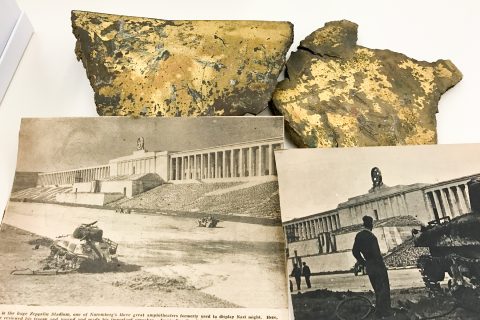 In celebration of Germany‘s defeat, the U.S. Army in 1945 blew up a giant swastika that crowned a stadium in Nuremberg. Fragments of the swastika are among the archival holdings of USC Doheny special collections. (Photo/Jeffrey Langham)

• Fifty boxes of documents from an infamous lawsuit, Martin Marootian et al. v. New York Life Insurance Company, filed on behalf of Armenian families whose relatives’ attempts to collect on the insurance policies left by their massacred family members during the Armenian genocide at the hands of the Turks were rejected by the company.

• Several editions of “The Protocols of the Elders of Zion,” a phony collection of documents fabricated by Russian antisemites in the early 1900s that claimed to reveal a shadowy plot by Jews to achieve global domination.

• A 16-volume series of English-translated transcripts of the first known Holocaust survivor testimonies, recorded starting in 1946 by David Boder in Jewish refugee camps.

• Racist pamphlets that were tailored for Nazi soldiers and the wider German public.

• Auction catalogues from the Netherlands that sold art stolen from Jews.

• A memoir about the Dachau concentration camp, published before the Holocaust in 1936 by a political prisoner.

• The first German books about the World War I-era Armenian genocide, published as the atrocities were still occurring or soon thereafter.

• One of the first books with a comprehensive account of the European Holocaust, titled The Black Book, published in 1946.

• Thick red phone books from Berlin during the 1940s. (A page on the book includes a list of Jewish institutions that shrinks every year.) 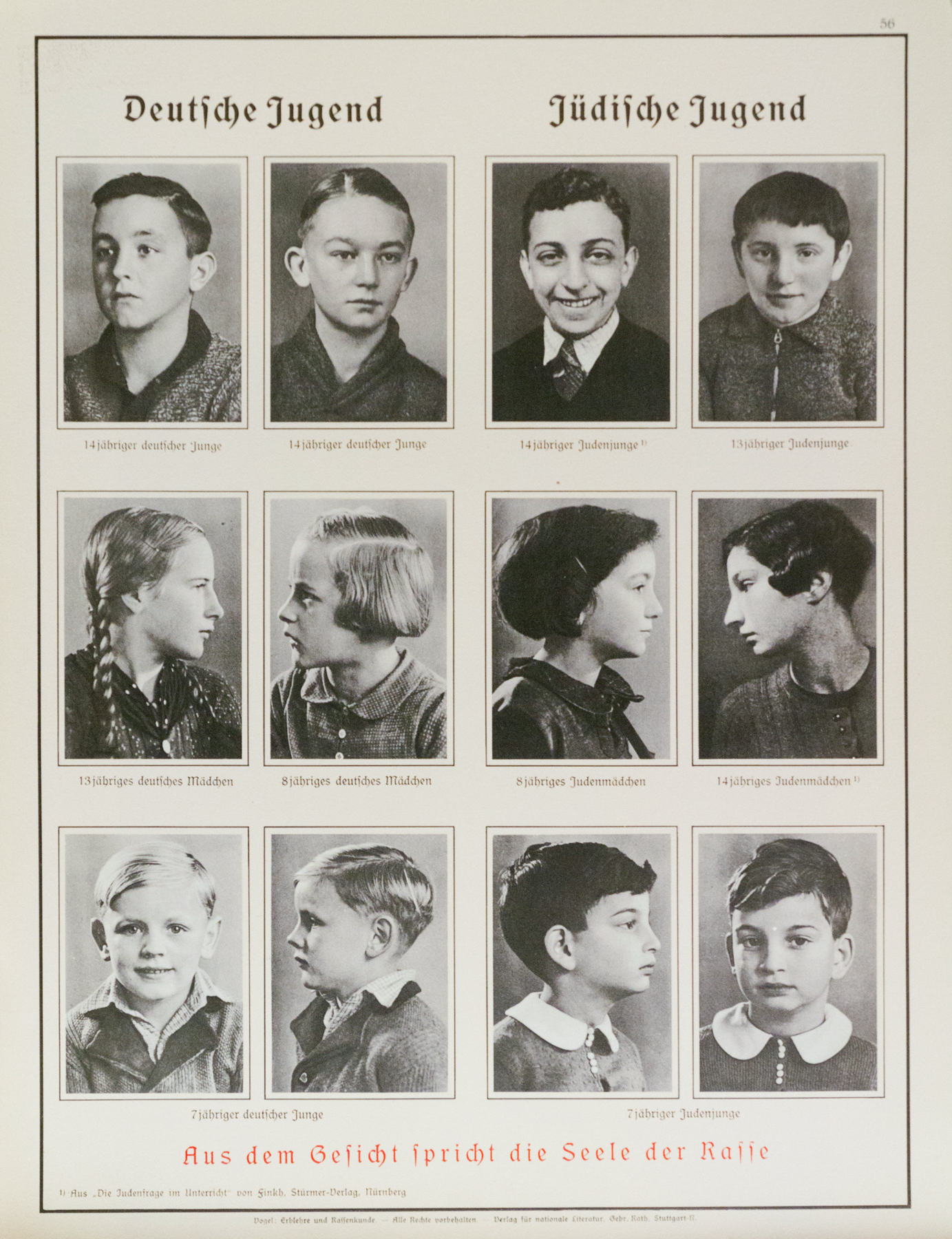 This anti-Semitic poster was hung in classrooms in Nazi Germany as an attempt to teach students how to distinguish Aryan children from their Jewish peers. (Photo/David Strick)

• A collection of Yizkor books in which the residents of wiped-out European Jewish communities – starting in the 1950s – memorialized their former localities with photos, newspaper clippings, essays and other items.

Though a majority of the literature is in English, the library contains books written in nearly 40 languages; it is said to have the fullest collection of Dutch-language Holocaust materials in the world. It also now houses hundreds of books about genocides that occurred in Ottoman Empire, Rwanda, Guatemala and Cambodia.

Gruner, a native of Berlin in East Germany, caught his first big break shortly before starting his USC job.

A well-known book dealer from Los Angeles named Eric Kline was passing through Berlin and agreed to meet Gruner at a coffee shop. Kline had just offered a collection of about 11,000 books about the Holocaust to USC. Several buyers were interested, but Gruner convinced Kline to sell them to USC.

“It was not just about the money,” Gruner said. “It was to find a home for these books. He wanted to make sure that they are used in a university context for research and education. I had to convince him that I was serious about establishing a Holocaust program at USC.”

Kline agreed to sell to USC for several hundred-thousand dollars.

Kline’s collection was a rarified trove; it includes a wealth of books on the Holocaust from the 1950s-70s, most of them out of print. It also included 1,500 rare books and items from the 1930s and 1940s.

The collection has been maintained and expanded by the USC Libraries system with the help of Lynn Sipe, a newly retired associate dean of collections who is so committed to the cause that he still works as a volunteer in the collection twice every week.

Even though I’m not Jewish, I feel very strongly about the subject matter.

“Even though I’m not Jewish, I feel very strongly about the subject matter,” Sipe said. “Any Holocaust denier who had any kind of functioning mental faculties could walk into the collection and (say) ‘Oh, maybe there’s something to this Holocaust thing’ that they are so busy denying.”

Sipe was instrumental in securing the initial trove of books from Kline: He learned of it and sent word to Gruner just prior to his arrival from Berlin.

In 2017, the USC Libraries system doubled down on its commitment to enlarging the collection. In what it called the Collections Convergence Initiative, it outlined three areas of expertise for USC: California and the American West; LGBTQ history and culture; and genocide studies. Gruner is the faculty liaison for the genocide field. The library system has since added two more areas: East Asian history and music.

“The Collections Convergence Initiative connects library curators with communities of scholarship to advance research and creative practice, particularly through the use of primary sources,” said Catherine Quinlan, USC Libraries dean. “Holocaust, genocide and exile studies are essential subjects of research and teaching at USC.”

To ensure the collection is current, the university purchases every new book in English and German on the Holocaust every year, growing by as many as 1,000 books annually.

Gruner said the quality of the research papers by students — as well as by the research potential for fellows and visiting scholars conducting research at the USC Shoah Foundation Center for Advanced Genocide Research — has skyrocketed.

“I encourage the students to really go for their passion, to pursue questions they are really interested in,” he said.

The quality and quantity of the resources in the Holocaust and Genocide Studies Collection, together with the 55,000 survivor testimonies at USC Shoah Foundation and the archival holdings of USC Doheny special collections, is one of a kind, he said.

“There is no comparable place in the U.S. for conducting research on the Holocaust and other genocides,” Gruner said, “or even in Europe.”

Event marks the start of the 25th anniversary of the institute, which shares testimonies of 55,000 survivors of the Holocaust and other genocides.

A visit by survivor Pinchas Gutter to his homeland is a recollection of the family he lost and the life he might have lived.

USC Shoah Foundation develops technology that allows audiences to interact with the recorded image of a genocide survivor.

How to teach against hate? Lean on genocide survivors

Learning from eyewitnesses of some of history’s darkest moments, educators strive to teach the power of decency and respect.