Avni Barman, a USC senior, remembers the first day she interned at LinkedIn.

She was excited about the software engineering internship, where she would go on to create features that are used by thousands on the platform today. But, when she walked into its San Francisco office, she was a bit startled.

“I was the only female on my entire team,” she said.

Barman, and probably most of you reading now, are familiar with the statistics:

For Barman, a bell went off. While there was a push for women in STEM careers, she thought there should be just as much support for getting women in positions of power at tech companies. 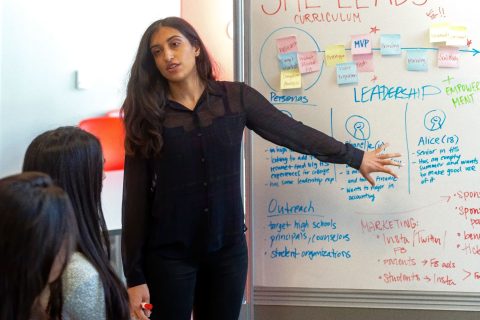 Barman thinks it’s important for girls to see entrepreneurship as an option from an early age. (USC Photo/Gus Ruelas)

She started to think: “What if we tackled this at a younger generation — who will be the generation of female founders?”

This led Barman to come up with She Leads, a nonprofit mentoring program that pairs teen girls with female founders. In March, it will kick off with a two-day “makeathon” at Snapchat parent company Snap Inc.’s Santa Monica headquarters, where dozens of teen girls will get hands-on workshops on everything from marketing to product development. There will be a pitch competition, where a lucky dozen will leave as the nonprofit’s first cohort of mentees. The idea isn’t just to get advice, but to help these young women bring their business ideas to fruition.

In the months leading up, Barman and her team — nearly all women of color and many colleagues in the academy — have spent hours glued to their laptops. There’s sophomore Shirley Huang designing, sophomore Dani Boyce on branding and senior Sarah Kim tackling logistics and accounting — and that’s just a few. Nearly all pitch in on other stuff too, whether it’s design or coding.

Academy sophomore Kaitlyn Chu, overseeing partnerships, loves the idea of She Leads because she herself was a teen entrepreneur who, with zero guidance, was flying by the seat of her pants.

“I had to learn a lot of stuff on my own, through YouTube and Google searches,” Chu said, who made hand-designed iPhone cases in high school. “I was super on board when I heard the concept. … It’s something I would have wanted.

It’s important, at an early age, for girls to see entrepreneurship as an option, the team said. Talking to female founders in her research, Barman said, the one commonality was how much their environments impacted them — whether it was supportive fathers who brought them on business trips or seeing their mothers be breadwinners.

She Leads: Broadening exposure to entrepreneurship

Exposure to entrepreneurship shouldn’t be limited to a fortunate group, Barman said, and that’s the idea behind She Leads.

Barman is also the president of USC Girls in Tech, the only university chapter of the international organization, bringing its membership up from a couple dozen a few years ago to roughly 200 now. She’s created a scholarship to bring students annually to Grace Hopper Celebration, the biggest conference for women in computing in the world. She also hosts events, such as a hike around Griffith Observatory with NASA’s Jet Propulsion Laboratory, to familiarize students with local tech companies.

For those who can’t attend due to financial hardship, She Leads has scholarships available to attend the March event. And the group website, which will provide the communication and curriculum for mentors and mentees, will also have a DIY entrepreneurship handbook available for download.

Empowering young women in tech, it seems, has become a mission of Barman’s and she has no desire to slow down.

Find out more about the She Leads x Snapchat Entrepreneurship Makeathon in March.

The school announces its full-time MBA Class of 2020 is 52 percent women — a first for top-tier business schools.

Empowering women and minorities in science, tech and more

USC Price grad student moves from D.C. to L.A., where she pursues a degree in nonprofit leadership and management.

Local nonprofit educates hundreds of boys who eventually earn degrees from four-year universities across the country.