When she was only 11, she began accompanying her parents to their job cleaning a movie theater. They would leave their South Los Angeles home at 1 a.m. for the graveyard shift. As Martinez got older, she pitched in, sweeping screening rooms and scrubbing hot dog and popcorn machines. It was exhausting.

One night as Martinez and her mom got coffee at a convenience store to stay awake, a gunman stormed in and threatened the cashier. The man fled and no one was harmed, but Martinez left shaken.

With no education beyond fourth grade, Martinez’s parents had few options to escape the nightly grind. But they wanted better for their children. So they took them to the theater on weekends and during summer breaks to witness their work firsthand, hoping it would compel the kids to do well in school.

It worked. Martinez’s success in high school earned her a spot in the 2018 entering freshman class at USC, along with a Mork Family Scholarship. The coveted scholarship goes to 10 high-achieving students each year, covering their tuition and providing a stipend for living expenses. Martinez is grateful for the support, and she plans to use the opportunity to help her parents and others like them.

“Being in their shoes, seeing the extent of their sacrifice for us, ingrained my drive to improve not only their conditions, but also the conditions of other families with backgrounds similar to mine,” she said. “It makes you see there’s only one option, and that’s to move forward.”

Sitting in the shade of a towering jacaranda tree near Taper Hall on the University Park Campus, Martinez flips opens her planner. Each day is neatly segmented into dozens of tasks and activities, painstakingly scheduled to the minute. She needs that level of careful organization because of her many pursuits at USC. 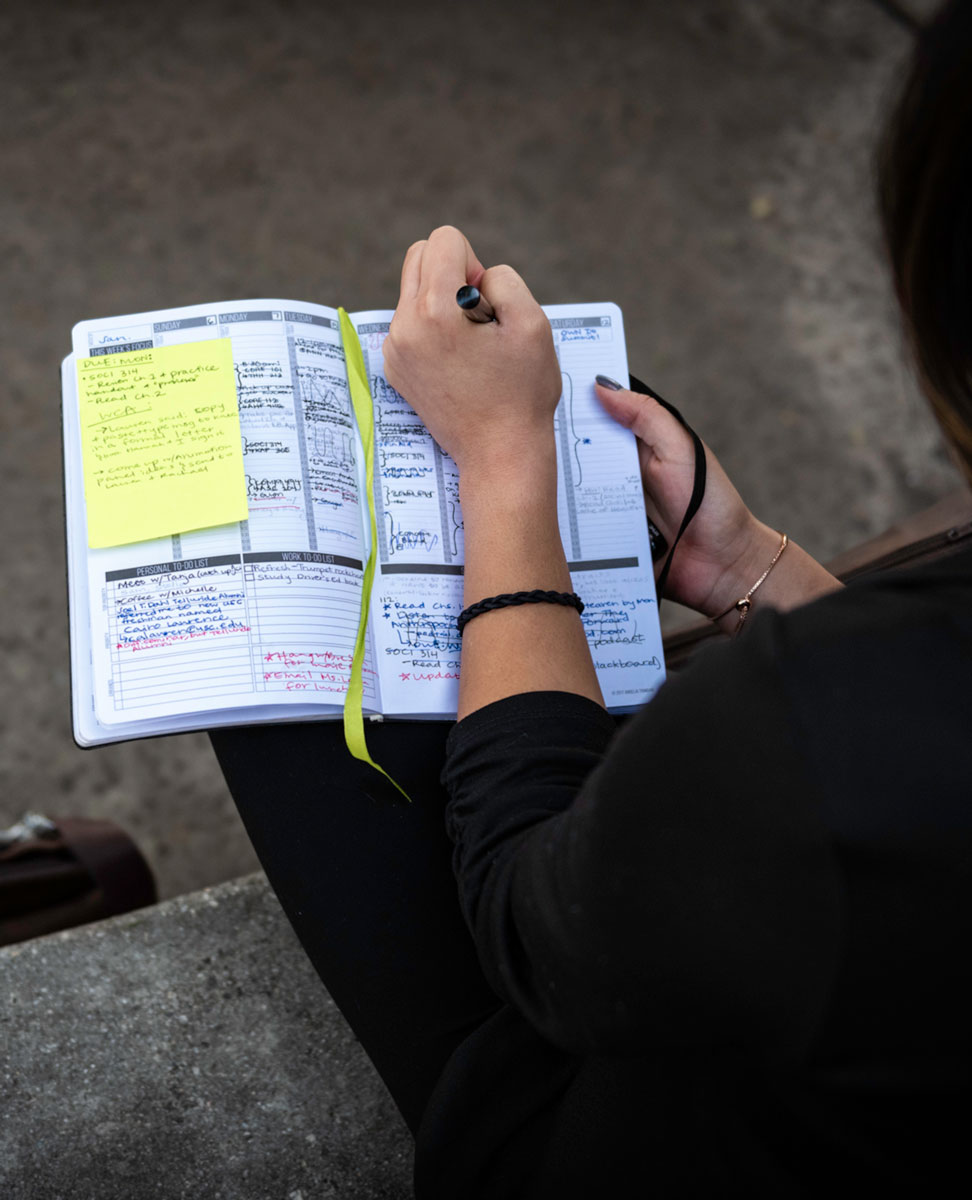 Martinez is working toward a degree in nongovernmental organizations and social change at the USC Dornsife College of Letters, Arts and Sciences. She is also eyeing minors in the entertainment industry and justice, voice and advocacy.

Beyond her classwork, she is already involved in student organizations that promote animal rights, environmental sustainability, women in cinematic arts, feminist media and business in entertainment. Oh, and she also plays trumpet in the Trojan Marching Band.

“This works so well for me because it breaks things down by the hour,” she said as she riffled through the color-coded pages of the planner. “I try to make sure I’m using my time as wisely as possible. My biggest regret would be that I didn’t use the resources here enough.”

A USC fan since childhood realizes her dream

Martinez has been prepping for this moment for years. She knew by middle school that USC would be her top college choice. Living in nearby Willowbrook, a small community sandwiched between Compton and Watts, influenced the decision.

She would attend events on campus like panel sessions featuring women in leadership roles. And as her interests condensed around improving diversity in cinema and launching an educational nonprofit, it felt natural to stay in Los Angeles — the hub of the entertainment industry and home to a robust nonprofit sector.

When I say I really wanted to go to USC, I mean it. I geeked out to the point that I lived and breathed USC.

By high school, at Ánimo Watts College Preparatory Academy, Martinez was dashing home after class to watch YouTube videos by USC students, seeking tips for aspiring Trojans. She regularly checked the USC website for the latest news stories. She daydreamed about the classes she would take and the clubs she would join.

“When I say I really wanted to go to USC, I mean it,” she said. “I geeked out to the point that I lived and breathed USC.”

Still, when she arrived home from school one day to find her sister holding a thick cardinal-and-gold package and her mom wielding a camera, Martinez went into denial. She was convinced the university had just sent some brochures. It couldn’t possibly be an acceptance letter.

“Once I opened it, I just started screaming,” she said. “My mom and I were crying — it was emotional. She said, ‘See, all this sacrifice was for a reason.’”

Martinez is in the first generation of her family to attend college. Her older sister takes classes at a community college, and Martinez is the first to enroll at a four-year university. So learning she had been accepted to USC’s most competitive class ever proved a little intimidating. Then Martinez found out she would be a Mork Family Scholar.

The honor brought relief about her finances. But it also created anxiety. She met other recipients of the prestigious scholarship and worried that she wouldn’t measure up.

“I got imposter syndrome. I just thought, I’m sure they are all more qualified,” she said. “It’s a mentality that plagues a lot of people from communities like mine.”

But for people who know Martinez from her high school days, there was never any question she belongs at a place like USC. Samantha Levra first met Martinez while working in her school as a community engagement coordinator with an education-based nonprofit.

She was immediately struck by Martinez’s intelligence, kind demeanor and drive to succeed.

Not only is she really hard working and dedicated to advancing herself, but she also wants to bring everyone with her.

“Not only is she really hard working and dedicated to advancing herself, but she also wants to bring everyone with her,” Levra said. “She wants to give back to the community. She understands and appreciates the sacrifices her parents have made to help her get to where she is now.”

Levra had earned a degree in political science and sociology at USC in 2016, so she offered some advice as Martinez prepped her college application. Levra also provided suggestions and resources when Martinez organized a major event — a local TED Talk — in high school. She recalled receiving a handwritten thank-you note days later. She keeps it on her desk for encouragement. 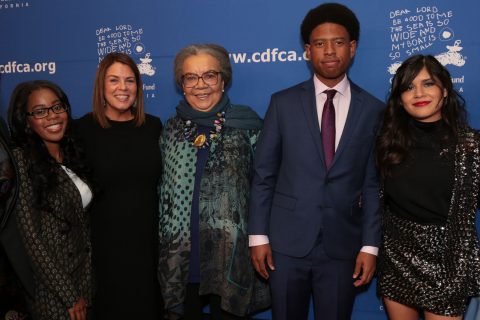 Martinez was active with the Children’s Defense Fund before coming to USC; here she is seen at far right with fund founder Marian Wright Edelman and other scholars at the organization’s Beat The Odds Awards. (Photo/Alex J. Berliner, ABImages)

“She makes me want to be a better student,” said Levra, who is currently pursuing her master’s in public administration at the USC Price School of Public Policy. “If Jackie Martinez is on campus, I need to be working really hard, too.”

Now that she has spent a semester as a Trojan, Martinez feels more comfortable in her USC surroundings. And she already has a clear vision for the future. Her involvement with a creative filmmaking initiative in high school led to a mentorship program with Erika Olde, a producer who strives to open doors in the industry for young women.

The experience inspired Martinez to pursue a career that would help her to promote diversity in media. Her dream job is working in corporate responsibility at a major movie studio. She is encouraged to see more media companies unveiling policies to increase diversity on and off screen, but she also sees room for progress. Martinez also envisions working in the nonprofit sphere to support children with backgrounds like hers, especially low-income kids from South America.

“I’m excited to see what she does,” Levra said. “I have high expectations for her, but only because I know she’s ready for the challenge. She’s incredibly resourceful, she’s innovative and she really takes the initiative. I think she’s going to have an international impact.”

It can be tricky to find free time, but Martinez likes to take the occasional trip home to Willowbrook. She enjoys relaxing with her family and her dog, a Shih Tzu and Yorkie mix named Osito, which means baby bear in Spanish.

Watching movies with her siblings helps Martinez feel recharged and refreshed when she returns to campus. And catching up with her parents helps her stay grounded and remember what she is fighting for.

“I’m here now, but they are still working the theater,” she said. “It just serves as a constant reminder that I gotta get it right. I have to make the best of my time here, so none of those nights are in vain.”

Sisters embrace a spirit of service at USC

Nikki and Shaliz Aflatooni immersed themselves in volunteer opportunities as undergrads — their way of giving back after receiving merit scholarships.