As one of Southern California’s largest institutions, USC has a major environmental footprint — from its water and energy use to the tons of waste created on campus each year.

So what is the university doing to lessen its effects on the environment?

Ellen Dux, who oversees the USC Office of Sustainability, sat down with USC News to talk about the university’s efforts to save energy, use less water, recycle more of its trash and get more members of the Trojan Family involved in sustainability.

Why don’t we have recycling bins around campus?

We do! Students and others living on campus, including those at USC Village, can sort their waste into recycling and mixed-waste bins. This fall, some students living in Cardinal Gardens and Nemirovsky Residential College began participating in a pilot composting program. And off-campus residents can separate their recycling and trash.

Shouldn’t we be using reclaimed water to irrigate our trees, flowers and lawns?

We have already installed 90 percent of the so-called “purple pipes” required to bring in recycled water from the city throughout the University Park Campus. Now we are just waiting on the Los Angeles Department of Water and Power to connect the city’s recycled water feed to our purple pipe infrastructure. That is scheduled to happen by 2024.

In the meantime, we are planting more drought-tolerant plants and trees on campus and keeping a close eye on our many water sprinklers and 39 fountains to make sure they are operating correctly. Each fountain has a specific seasonal schedule to reduce water waste. And those fountains represent less than 2 percent of our annual water consumption.

Why don’t we serve food from sustainable sources in our dining halls and restaurants?

Most of our food purchases are made by USC Hospitality, which set a goal to buy 20 percent of its food from sustainable sources by 2020. We’ve already far exceeded that target.

We are also growing our own produce in our USC Teaching Garden. In just 1,200 square feet, we have more than 2,600 organic plants growing in vertical towers that use far less water and land than traditional farming techniques. We harvest the produce twice a week and serve it in our restaurants like The Lab and Moreton Fig and at one dining hall, Everybody’s Kitchen.

Isn’t it too expensive to rely on renewable energy?

It is true that the L.A. Department of Water and Power charges more for green power — 3 cents per kilowatt hour. It doesn’t sound like much, but that would increase our annual electricity costs by almost 20 percent, so we don’t use that approach.

But there are other areas where we can save a lot of money. We have a central thermal energy system that uses chilled water to cool our buildings, reducing our energy costs. We also are in the process of installing new LED lighting throughout many of our buildings. That should cut our lighting costs by 50 percent. Our facilities team just installed those LED fixtures in parking structures on the University Park Campus for $60,000. Our annual savings are expected to exceed $215,000, so the upgrade paid for itself in just four months. Another project to update Keck Hospital of USC to an automated climate-control system has saved the university about $110,000 in its first year and should save us $1.4 million over five years. 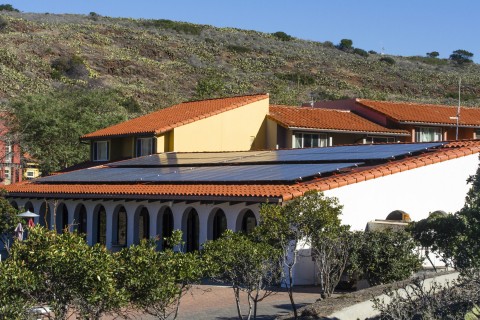 Why don’t we have solar panels on our buildings at USC?

However, the Los Angeles Department of Water and Power doesn’t allow large-scale solar power purchase agreements — which essentially allow solar developers to install solar panels on our buildings without USC having to cover installation costs. Without the incentives and benefits of those agreements, the university would have to pay significantly more to install solar. Most of our buildings are also relatively narrow and tall, leaving little roof space for panels. And to build a solar array on our structures may require costly upgrades to the buildings themselves to meet code requirements. Those are some of the reasons that we aren’t pursuing large-scale solar power at this time.

How can we make our historic buildings more energy efficient and environmentally friendly?

Although it’s true that adding major upgrades like solar panels would be difficult and not very cost-effective for many of our older buildings, we can make some easy fixes that will save money and increase our sustainability. In one example, we are expanding a new climate-control system that will allow us to stop cooling or heating buildings when they aren’t being used. That software is running in 15 buildings and 242 classrooms already, and we plan to expand to another 259 classrooms.

For new construction, our building standards at USC require that all new facilities be designed to stand for at least a century. That means we build strong and safe structures, but it can also increase our energy upgrade costs and make it more difficult to include new green technology. However, all new buildings constructed at the University Park and Health Sciences campuses since 2010 meet the standards of LEED Silver certification. 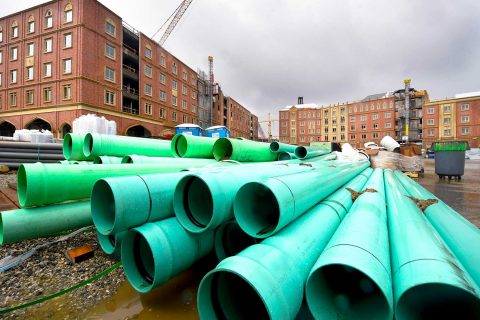 An underground drain system was installed at USC Village to reduce runoff into the city sewage system. (USC Photo/Gus Ruelas)

USC Village is particularly advanced in terms of its green features. It has a central system for chilled and hot water that is more energy efficient than individual units for each building. We used prefabricated wall panels made in Southern California with local, sustainable materials. We installed carpet tiles to make it easier to repair damaged areas, rather than replacing carpeting throughout a whole room. Bikes are also encouraged at USC Village, which has 224 spaces at public racks and secure bike parking in residential halls.

Shouldn’t we have a campuswide system to capture and reuse rainfall?

We installed a system at USC Village to capture and filtrate storm water. It features six dry wells that stretch down as far as 65 feet. They gather water from rooftops and hard surfaces and filter it into the ground, helping recharge the natural underground aquifer. As far as building a campuswide system, we just don’t get enough rain in Los Angeles to make something like that viable due to the costs associated with infrastructure demolition and construction.

Are there ways for students, faculty and staff to get involved in USC sustainability efforts?

There are tons of options for students, staff and faculty to get involved with sustainability at USC, from green tailgating to urban gardening to do-it-yourself green research projects. We also have a USC Green Engagement Fund that supports student-driven initiatives focused on increasing sustainability at USC. Also, this spring, the Office of Sustainability will begin the planning process for USC’s next long-range sustainability plan. We want input from everyone on campus about where we should focus to advance sustainability at USC in the decade ahead.

A year of remarkable accomplishments on the road toward sustainability

Year in review: The year marked a number of milestones as USC continues its efforts to fight climate change starting at home.

In a move taken by only a handful of universities, USC aims for carbon neutrality. By 2025, USC will have improved its energy efficiency and expanded the use of solar power. USC also has made sustainability a core part of its curriculum, fostering global citizens who will fight climate change.